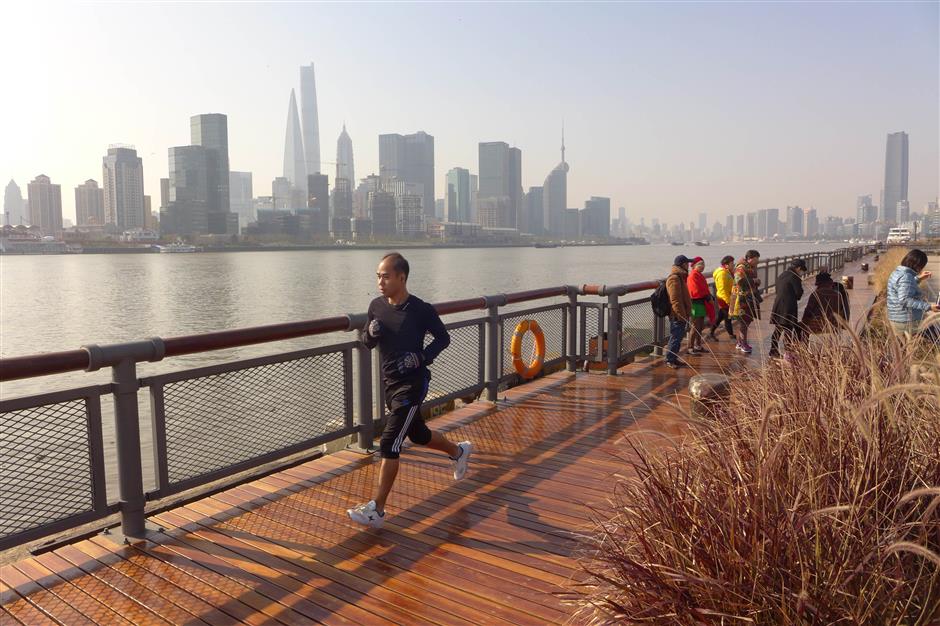 A resident runs on the newly open Huangpu riverside in Hongkou District. The city government officially opens up 45 kilometers of waterfront between the Yangpu and Xupu bridges on Sunday.

The Huangpu riverfront in downtown Shanghai officially opened to public on Sunday with continuous paths, bridges and preserved historic buildings.

The Bund has long been a magnet for residents and tourists alike, but now vast swathes of the downtown riverfront are being redeveloped and opened to the public.

“This is the perfect place for me to jog in the morning,” said Melanie Samuni, a tourist from Tel Aviv whose great grandmother sought asylum in Shanghai during World War II. “In Tel Aviv, I jog along the beach, here I can enjoy the view across the Huangpu River.”

She came to Shanghai a couple of weeks ago for her gap year and likes jogging along the riverside.

The city government has opened up 45 kilometers of waterfront between the Yangpu and Xupu bridges. The project has been compared to the Left Bank in Paris or the Thames walkway in London. It is part of the city’s aim to become an “excellent global city” by 2040.

John Park, a Korean student who is taking part in an exchange program with Tongji University, said the waterfront in Yangpu is full of surprises. “It’s always interesting to walk in the riverside wetlands to discover something new,” said Park. “I can come across a sculpture or an old house.” 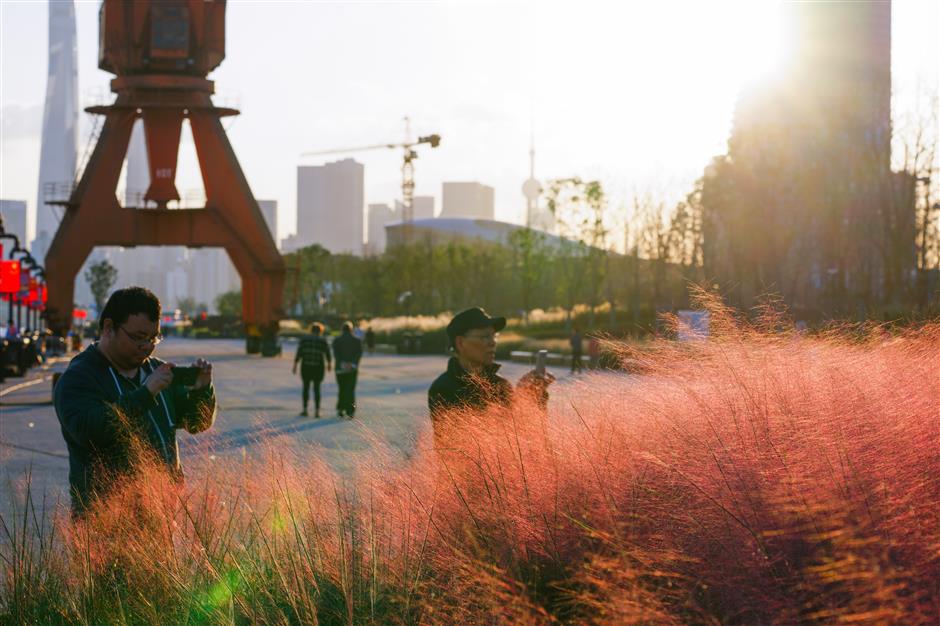 The Huangpu, Shanghai’s “mother river,” once served as a major shipping and transport hub with warehouses, wharves and factories. Over time, most were abandoned and left to decay.

"The core concept is to give the ‘mother river’ back to the residents of Shanghai,” said Wu Panfeng, director of detailed planning for the Shanghai Planning, Land and Resources Administration, the city’s top planning body.

More ports will be built along the riverbanks for ferries and sightseeing cruises to allow visitors to enjoy the waterfront scenery, said Jin Yi, an official with the Shanghai Transport Committee’s planning department.

"Three new sightseeing ports and two public ferry ports have been planned on both sides of the river and near city landmarks," Jin said.

Each district has created distinctive features for their waterfront section, based on their history, and more will be added.

The former Puxi Expo site in Huangpu District, for instance, will have 56 lamps along the riverbank to commemorate the World Expo 2010 Shanghai.

In Pudong, some 20 lighthouses will be built along the bank. They will both illuminate the path and incorporate services, such as cafes or visitor centers, the administration said.

“You can feel the harmony of urban life and the nature here,” said a senior resident surnamed Liu who lives near the Yangpu section of the riverside. “All the old buildings hiding in beautiful gardens,” he added.

Hu Xinran, who lives near the river in Xuhui, said she had witnessed the greenbelt alongside the river growing out from nothing. “The riverside must be more charming in future,” said Hu. 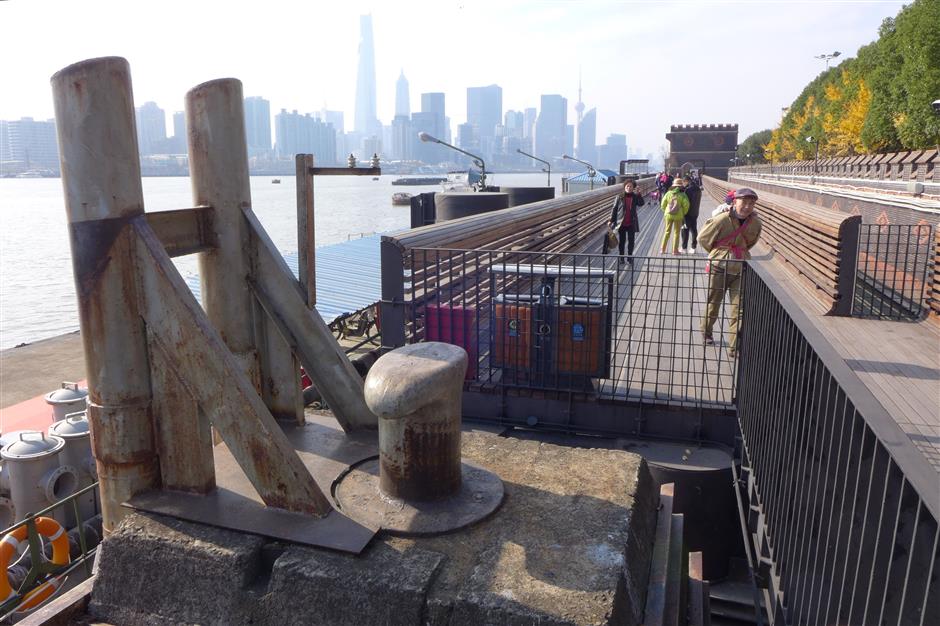 Visitors watch a relics of a former shipyard port on the Huangpu riverside in Yangpu District. Many of the old industrial sites along the 2.8 kilometer riverside area have been retained and upgraded.

Yangpu’s riverside was once home to many of China’s earliest industries, including paper and textile mills, shipyards, a water plant, a coal gas plant and even a fish market. Many of them date back almost a century.

The Shanghai Shipyard, for instance, which was relocated, has left behind a large number of facilities such as gear wheels, conveyor belt crane towers, and pipelines. There’s also a workshop and a historic building with Shanghai’s earliest elevators. All are being preserved for the public to enjoy.

Some equipment and relics from the nation’s first textile mill, which was built in 1915, and the major seafood market which opened in 1946 will also be developed as part of exhibition space.

A two-story wood-and-brick English-style country villa, which was the residence of the textile mill’s British boss, has been converted into a visitors’ area. 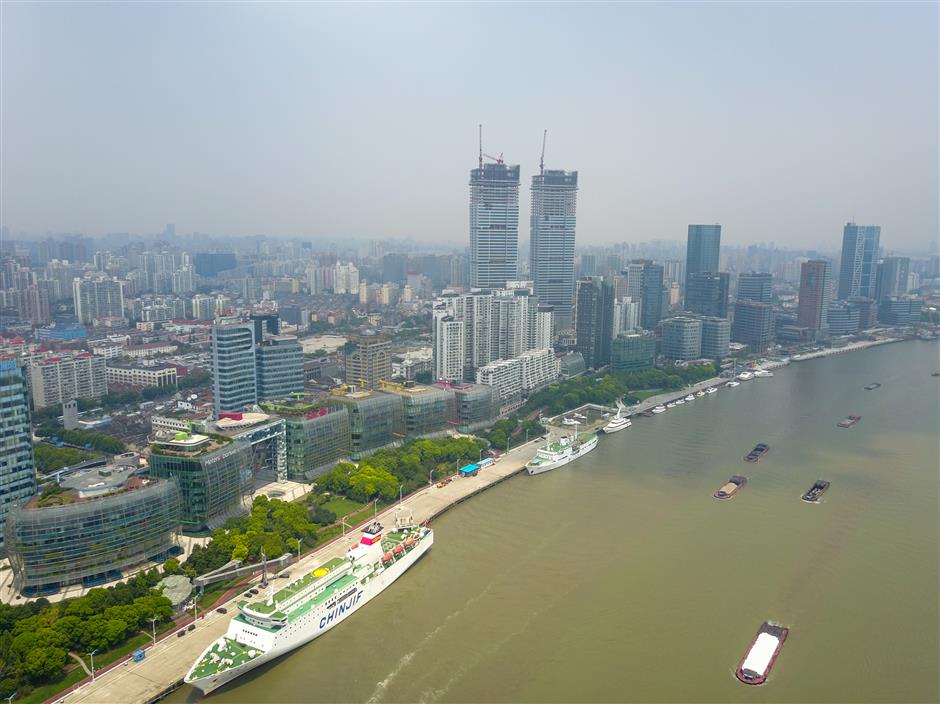 A bird's eye view on the Huangpu riverside section in Hongkou District, known as the North Bund that features a cruise terminal and parks.

Hongkou Waterfront — an urban forest on the North Bund

Hongkou District has developed its 2.5 kilometer riverside area — known as the North Bund — into an "urban forest" featuring historic landmarks of the downtown’s main residential region. Residents are now able to walk or cycle from Waibaidu Bridge to Qinhuangdao Road along the river through new paths that serve walkers, joggers and cyclists.

The paths lie in an area that served the city’s earliest cargo and passenger harbors.

"The Hongkou riverside section will become the best place to take a postcard photo of the Bund, the Lujiazui area or the North Bund,” the district construction management committee has said.

The waterfront area was previously owned by state-owned enterprises as office buildings, cargo ports or a cruise terminal and had long been closed to the public.

A skywalk and sightseeing platforms have been built to connect the three major bottlenecks — an outdoor restaurant, a ferry port and a cruise terminal — along the waterfront path.

Sports facilities for children and senior citizens have been erected along the riverside, said Zhou Jing, director of Hongkou sports bureau. 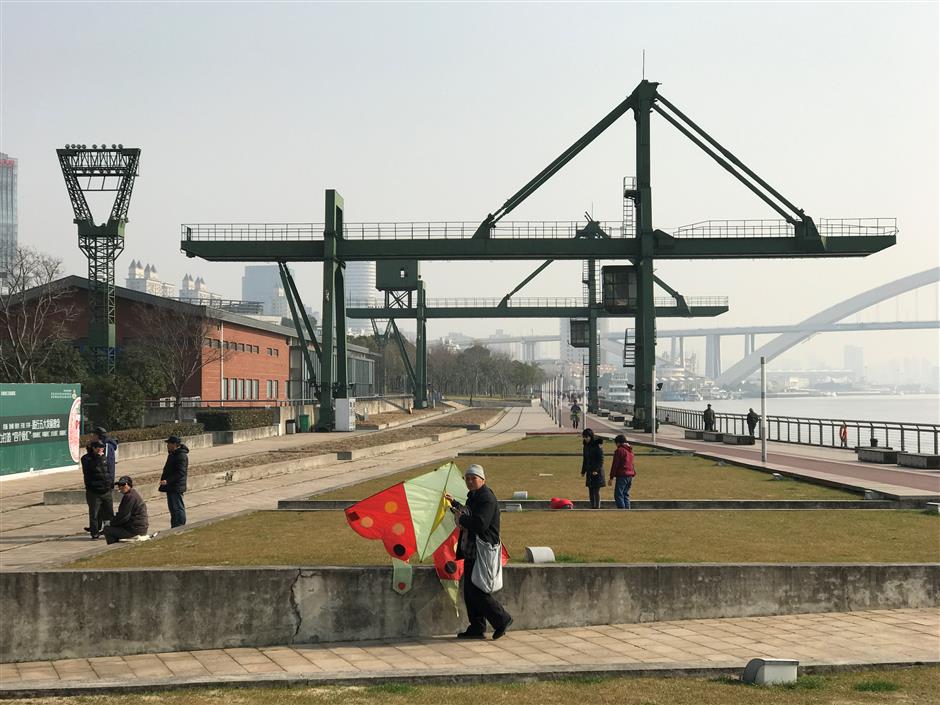 The Huangpu riverside in Xuhui District, known as the West Bund, features a large swathes of art museums and parks as well as former industrial relics.

The largest gathering of art museums and parks in Asia is evolving at the riverside area in downtown Xuhui District — the West Bund — to become the major hub to achieve the city government's ambition.

Six new major theaters along with 20 “cultural experience spaces” will open to public by the end of 2018 at the Shanghai Dream Center at the West Bund. They will include a 2,500-seat theater and an 1,800-seat concert hall.

The district is developing a waterfront area of 8.4 square kilometers into the West Bund Culture Corridor, the Museum Mile, the West Bund Media Port and other key projects.

The West Bund group has also signed a memorandum of understanding with France’s Pompidou Center to hold a five-year art exhibition at the under-construction West Bund Art Museum to open in early 2019.

Xuhui also plans to turn one of the former Longhua Airport’s two runways into a park featuring cycle lanes and jogging tracks.

Five tanks built by China National Aviation Fuel to store aviation fuel for Hongqiao airport are being renovated as a reminder of a past industrial era.

Cranes are removing the covers of the huge tanks so the structures can be converted into exhibition halls, plazas, gardens, book stores, education centers and restaurants. Now called Tank Shanghai Art Park, the site is scheduled to open in 2018. 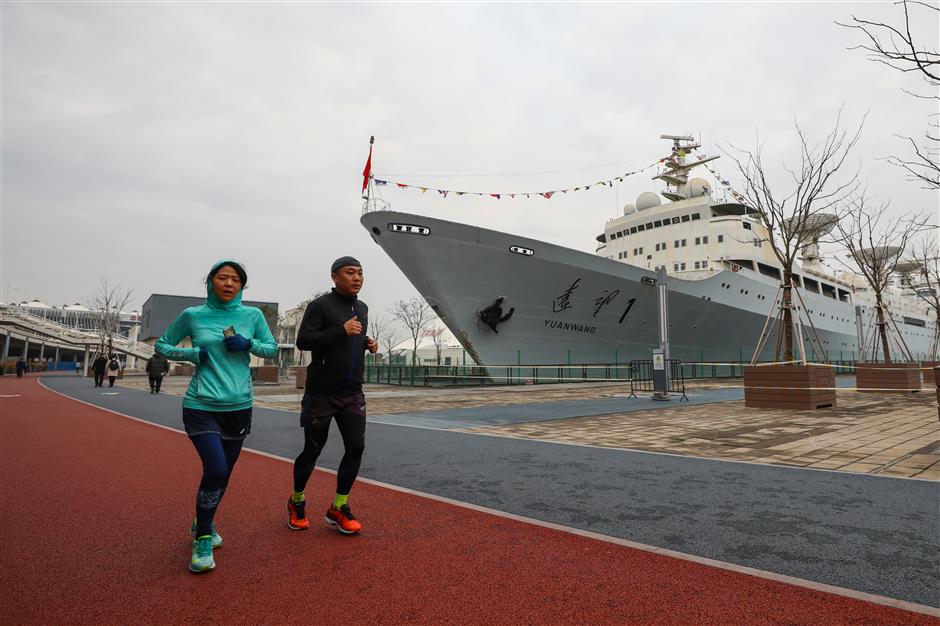 A “Gallery of History” will be built at the former site of World Expo 2010, which was also home to the city’s century-old Jiangnan Shipyard.

Many industrial relics from the cradle of China’s modern industry and Expo will be kept for the future riverside paths. Some 50 “flame lamps” erected along the river for the Expo will illuminate the area.

As a highlight, China's first-generation aerospace survey ship will be displayed on the Huangpu District waterfront. Yuanwang-1, which was retired in 2010 after accomplishing around 60 aerospace missions, is being exhibited at the former Puxi World Expo 2010 site near Longhua Road E. along the Huangpu River. It is being illuminated at night as a historic exhibit.

Pedestrians on the riverside paths can see and admire the well-preserved vessel, but as yet won’t be able to get onboard.

The ship is also part of a “scenic lamp belt” along the riverside areas on both sides of Huangpu River.

A control system based on Internet communication and cloud data will coordinate the scenic lamps along the waterfront in future.

The section of waterfront will be illuminated in different colors at various hours and seasons as well as holidays, according to Gao. 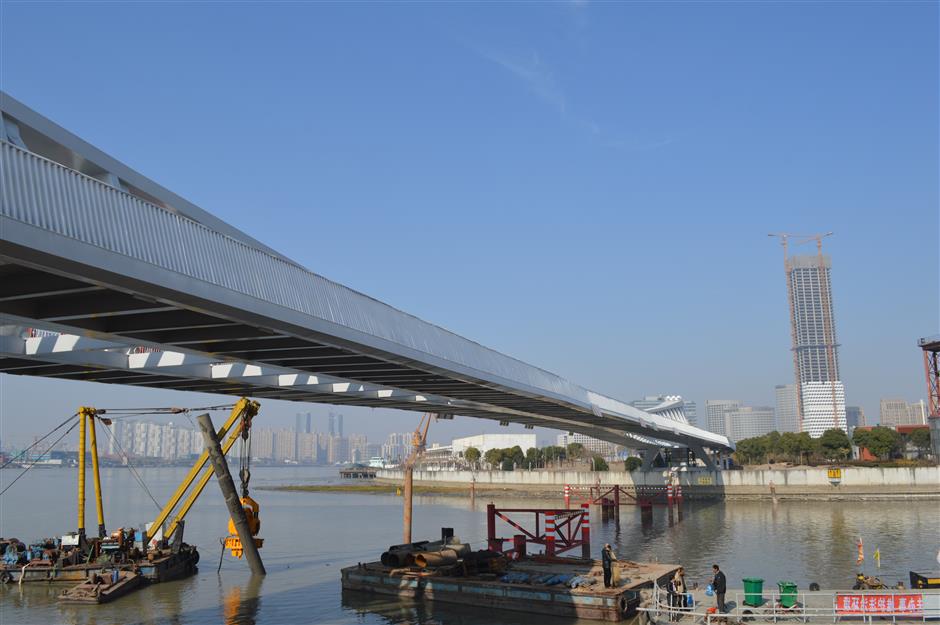 The newly built Chuanyang River Bridge along the Huangpu riverside in Pudong New Area, known as the East Bund. Twelve such pedestrian bridges span creeks and waterways running off the main river in Pudong, or skirt round some urban facilities along the river that would otherwise interrupt the paths.

The 23 kilometer Pudong New Area part of the Huangpu riverfront — the East Bund — connects Lujiazui financial center, the former World Expo site and many future city landmarks such as the Qiantan area, an upmarket business and residential site.

The east side of the riverbank was once intermittently blocked by ferry docks, commercial buildings, restaurants and construction sites.

To link them, 12 pedestrian bridges span creeks and waterways running off the main river in Pudong, or skirt round some urban facilities along the river that would otherwise interrupt the paths.

Many former industrial relics have been preserved along the riverside section. Minsheng Wharf near Minsheng Road, for instance, has been converted into an exhibition space.

A 50-meter-tall silo, built by a British shipping firm in 1908 and once the largest in Asia that stored most of the city’s grain in its heyday, becomes the main venue for the ongoing three-month Shanghai Urban Space Art Season.

A former shipyard is preserved and becomes a theater and commercial complex. A coal warehouse near Bailianjing River is being turned into a major modern art gallery. Surrounding areas provide places for artists to display sculptures and exhibitions.