A monitoring equipment has been installed at the taxi waiting areas at the airport that tracks the time that passengers wait in a queue for taxis, the Shanghai Airport Authority said.

If the line moves slowly, an alert is sent out for more taxis.

"With the new system, passengers should be able to get a taxi as soon as they come out of the terminal building," said Cao Liu, deputy general manager with the transport department of the Pudong airport. Even after midnight — and with no Metro service — they should get a taxi within 20 minutes, Cai insisted.

Passengers are known to wait for an hour to get a taxi, especially at nights when it is the only mode of transport.

It is one of the new measures at Pudong airport, which is expected to deal with over 8 million passengers during the annual Spring travel peak that started on February 1 and will last until March 12.

Apart from that, a baggage handler has been assigned to each of the carousels at the arrival lounge to help out passengers.

"I may have to bend down and get up over 1,000 times a day during the holiday travel," joked Song Yanmei, 37, one of the baggage staff at the T2 building. "It is really a hard work, especially for international flights." 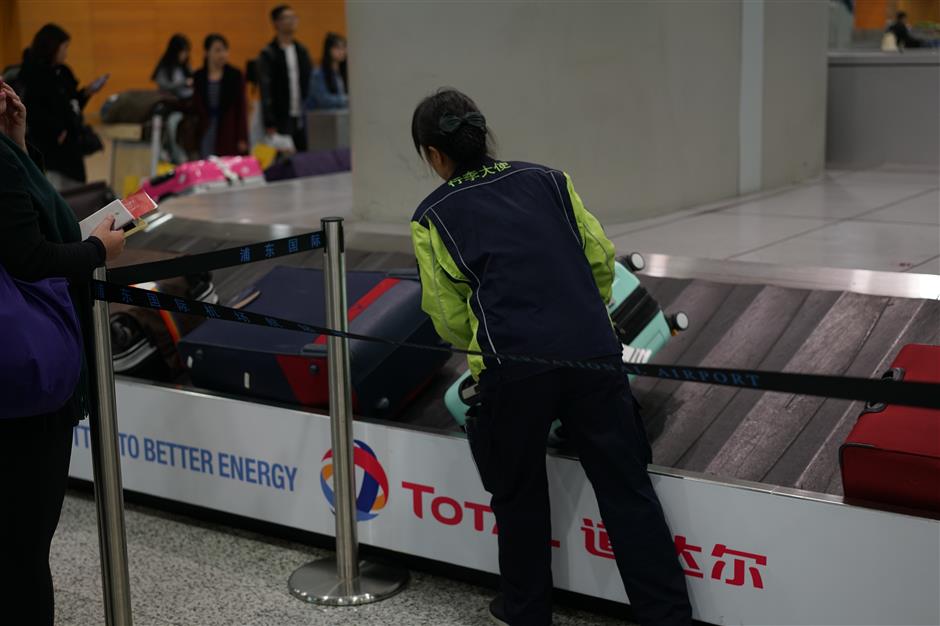 A baggage handler at Pudong airport puts the tags of luggage upside to make it easier for passengers.

Dong Wei, deputy general manager of Pudong airport, said seniors and people with disabilities can ask for help from staff like Song to get their baggage.

Also, a new integrated service center offers assistance on hotels, travel, car renting and transport. The service is available in both Mandarin and English.

Over 20 undergraduates from Sanda University, a private college, are offering interpretation services in English, Japanese and Korean at the security check, check-in counters and elevators at the Pudong airport.