No luck this time for American family 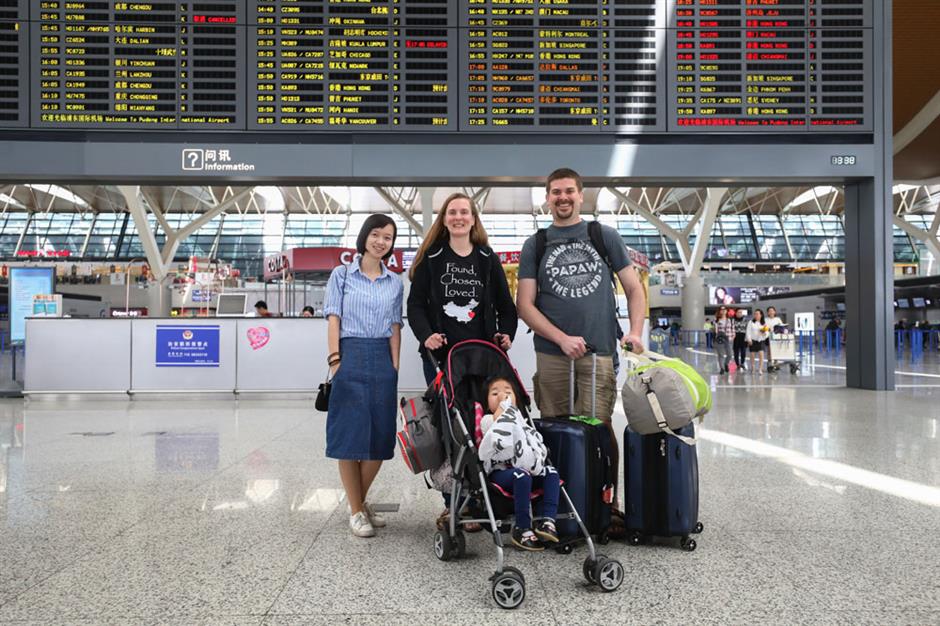 Scott and Misty Mack and Zhu Haixin, known as Haley to her family, say goodbye to Shanghai Daily reporter Hu Min (left) at Pudong International Airport as they leave the city.

THE American couple Scott and Misty Mack who came to Shanghai to look for the birth parents of their adopted daughter have left the city empty-handed.

But their trip was not without its plus points for the family, who brought their adopted daughter, Zhu Haixin, also known as Haley, with them — and the Macks intend to return to the city one day.

Haley, who was born around September 10, 2014, was abandoned at Shanghai No. 6 People’s Hospital in Xuhui District. She was diagnosed with heart and neural problems at birth.

It could be that her birth parents “are just not ready or feel shamed, but we still have time before Haley starts asking about them,” Scott said on Saturday.

“It is not easy especially in big cities like Shanghai because there are so many people and many come from far away.”

Recalling their experience in Shanghai, the couple smiled, and Scott said they had even met a girl “who was Haley’s friend” during her stay in the city, adding: “We saw her nannies at the Shanghai Children’s Home and all of them remembered her. They were very happy to see her although she was kind of shy.”

During their three and a half day stay in Shanghai, the family visited Shanghai Disney Resort and the city’s landmark Yuyuan Garden.

“The trip was good even if we were not successful in finding some information about her, but now we have more to give her than we did before the trip,” Scott said. “We will tell her all what we know.”

The couple, who live in Oregon, in the northwestern United States, recorded the search process with photos and videos, and they said they would show these and the files they had collected to Haley when she grows up. Scott said the hospital and the police were unable to add any additional information during the search.

“We love China and we really enjoy our time here,” said Misty.

“We will come here again within a few years when Haley grows up.”