Zhang gets his students crosstalking 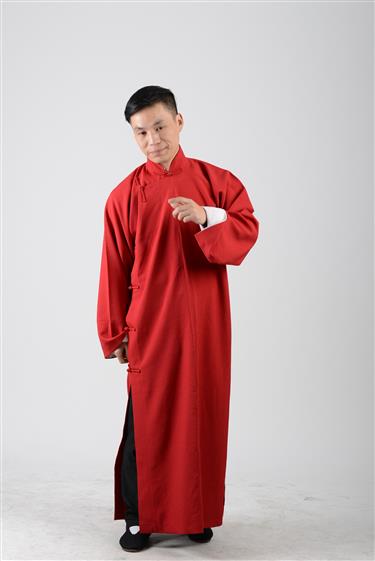 Two primary schools in Jiading have launched a class in xiangsheng (crosstalk), one of the traditional Chinese folk art forms spoken in a Beijing accent.

Taking the class is Zhang Wenze, who aims to cultivate more xiangsheng performers from a young age.

He describes his crosstalk art as haipai xiangsheng, a combination of Shanghai’s haipai culture (which combines traditional Chinese and Western culture) and northern xiangsheng arts.

Influenced by his parents, both xiangsheng amateurs, Zhang was deeply attracted by the interesting and funny stories he heard on the radio and started to learn crosstalk by himself.

“The ‘Walk at Night’ by Hou Baolin and Guo Qiru, featuring a pedestrian not abiding by traffic regulations, was the first piece of xiangsheng I heard,” he recalled. “It was so funny that I couldn’t help laughing even after I had heard it a lot of times.”

Zhang was 11 when he gave his first xiangsheng performance to his classmates. He adapted the two-actor show to a one-actor talk and the classroom was filled with laughter.

“On the first day in the high school, the teacher asked us to write down our career goal, and without hesitation, I wrote ‘to become a professional crosstalker’,” Zhang said.

Living in a small town, Zhang didn’t have the opportunity to encounter professional crosstalk performers and, as a result, he took “radio” as his crosstalk teacher, retelling the stories and mimicking the Beijing accent.

Learning the Beijing accent was like learning a new language. Zhang was born in central China’s Henan Province where the local accent is used more frequently than Mandarin, which also sounds different to the accent in Beijing. What made things worse was that there was no one to give him any instruction.

“Hence, I could only practice the accent with the radio in my spare time after school. My parents couldn’t understand my behavior and ambition to be a crosstalker,” he said. Every morning, Zhang would practice the tongue twisters or rhythm in a classic xiangsheng program.

“These were the days with no instruction, no Internet and no relevant books, but I kept practicing and researching,” Zhang said. Putting a lot of attentions into xiangsheng practice, he neglected his studies and, in 1993, failed to get into university.

Then, Zhang summoned up the courage to go to Beijing, looking for xiangsheng training programs in the capital. Unfortunately, he came up with nothing. After that, he decided to retake the college entrance examination. 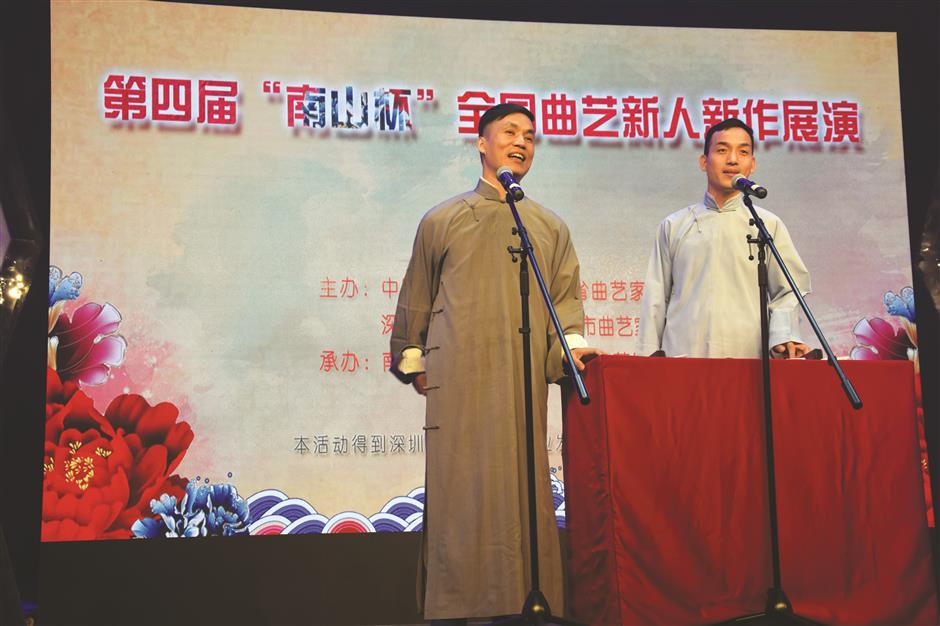 In the college, he soon became a celebrity for his xiangsheng performances. He was also invited to give a talk by Shanghai Television Station.

Recalling his dark days, Zhang wrote about his experience and had the article published in the magazine “Artists and Humor” compiled by Hou Yaowen and Cui Jinquan, both well-known crosstalkers in China. Through this article, he finally got the chance to communicate with professionals.

Despite his learning days being a struggle, Zhang never gave up and is now a well-known performer on stage bringing happiness to countless listeners.

After graduation, Zhang started his career as a crosstalker. Since 2003, Zhang has been on stage in Shanghai, at Changning District Folk Culture Center every week. However, attendances were sparse.

“It was because the northern Chinese art form couldn’t strike a chord with the southern residents. Most of the crosstalkers are from north, whose dialect may confuse the locals here and cause a difficulty in understanding what we are talking about,” Zhang said.

So he proposed the idea of “haipai xiangsheng,” mixing the original northern tradition and Shanghai haipai culture to provide local audiences with a better experience. Since then, Zhang has focused on creating pieces of haipai xiangsheng, to great success. More people in southern areas became fond of xiangsheng programs.

Now, Zhang is devoting himself to cultivating more people to take part in crosstalk, expanding the team of xiangsheng performers. Apart from teaching in the two Jading primary schools, he also gives a lecture in Home Study, a 24-hour library, every month in Jiading’s Waigang Town.

He also created a series of teaching systems for teenagers which are used frequently by local schools. A workshop in Jiading New Town Culture and Sports Center was launched welcoming adults to have fun in the xiangsheng world.

“I hope more southern residents come to enjoy the charm of this northern dialect performance,” said Zhang. “My ambition is to form a xiangsheng team in Jiading and generate more interesting programs for local people in three to five years.”