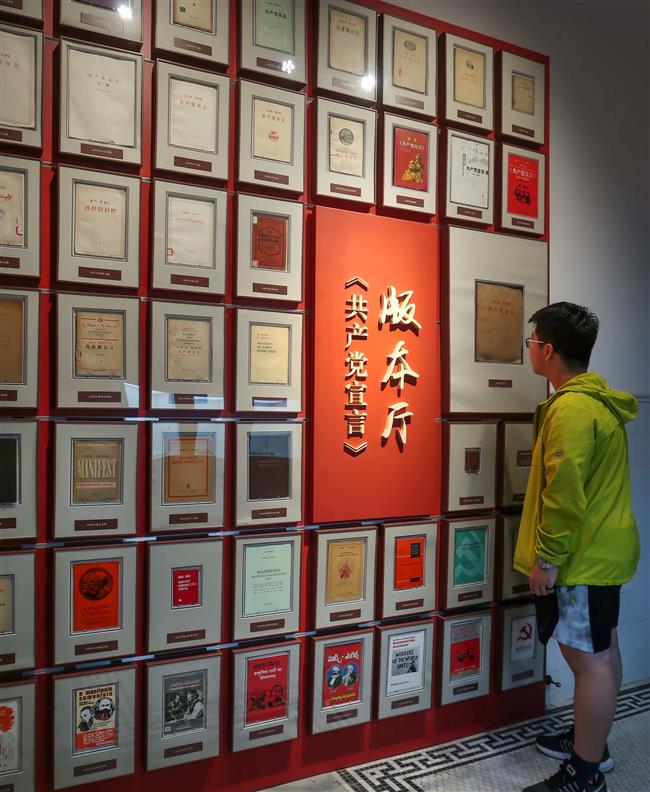 A visitor goes through various versions of The Communist Manifesto on display at the former residence of Chen Wangdao.

The former residence of the first Chinese translator of The Communist Manifesto, written by Karl Marx and Friedrich Engels, has opened to the public as an exhibition center featuring the document.

The exhibition displays different versions of the pamphlet and historical documents to show how Marxism spread to China and shaped the nation.

The three-story house at 51 Guofu Rd was a residence and office for Chen Wangdao, former president of Fudan University, and the first person to translate the full text into Chinese.

The house was listed by the city government as a cultural relic protection unit in 2014.

“The former residence of Chen Wangdao, as an exhibition center of the manifesto, will be a historical landmark in Shanghai and even China as the source of belief,” said Jiao Yang, Party secretary of Fudan.

The Western-style building has more than 400 exhibits related to the manifesto and Chen’s life as a social activist, educator, thinker and scholar.

His translation of the manifesto, which was originally published in February 1848 in London, came out in August 1920 in Shanghai. 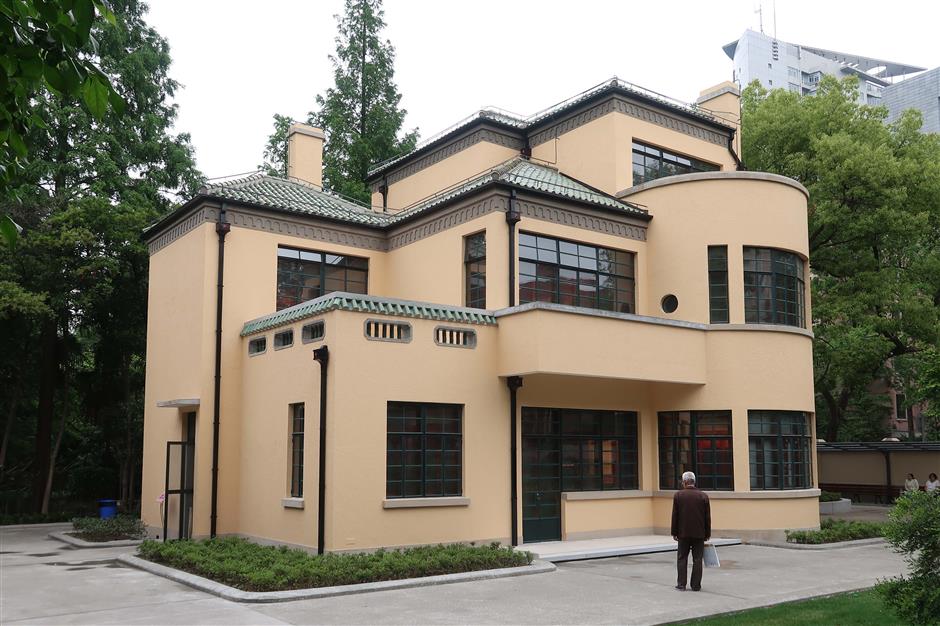 The former residence of Chen Wangdao near Fudan University. Chen was the first person to translate The Communist Manifesto into Chinese.

Chen was born in Yiwu County of neighboring Zhejiang Province in 1891. From 1915 and 1919, he studied at Waseda University, the Tokyo Academy of Physics (now Tokyo University of Science), Toyo University and Chuo University and obtained his bachelor degree in law at Chuo.

His experiences in Japan brought him into contact with communist ideas as the manifesto had already been translated into Japanese.

Chen later returned to China at the time of the May Fourth Movement. He first found a job teaching Chinese literature at then Zhejiang Provincial No. 1 Normal School and spread reformative thoughts, calling for reform of traditional morals and literature, along with other famous figures who had studied abroad, including Hu Shi, Chen Duxiu, Lu Xun and Li Dazhao.

The then government tried to force school principal Jing Hengyi to dismiss Chen, angering both the principal and students. As the school refused to obey the order, the government surrounded it with police, causing a public outcry.

Though the authority was forced to recall the order, Chen, then 29, returned to his hometown at the end of 1919 and began to translate the manifesto into Chinese based on Japanese and English versions, believing communism to be the way forward for China.

He completed the task in April 1920 and headed to Shanghai at the invitation of Chinese communist Chen Duxiu to join his periodical La Juenesse, also known as New Youth. The magazine was an important platform for the promotion of Marxism and anti-imperialist and anti-feudal thoughts.

In Shanghai, Chen founded a Marxism research society with Chen Duxiu, which is believed to be one of the first communist organizations in China.

They tried to publish the Chinese version of the manifesto, but found it difficult under the administration of the Kuomintang government. They secretly set up a printing press called Youxin, literally “new again,” at 12 Chengyu Lane on Fuxing Road M. to print 1,000 copies in August 1920.

Due to the tense situation and hasty editing, the copies had a mistake on the cover. The Chinese title of The Communist Manifesto — “Gong Chan Dang Xuan Yan” was wrongly printed as “Gong Dang Chan Xuan Yan.”

It quickly sold out and they hurriedly printed another 1,000 copies with the correct title, which was later reprinted across China. 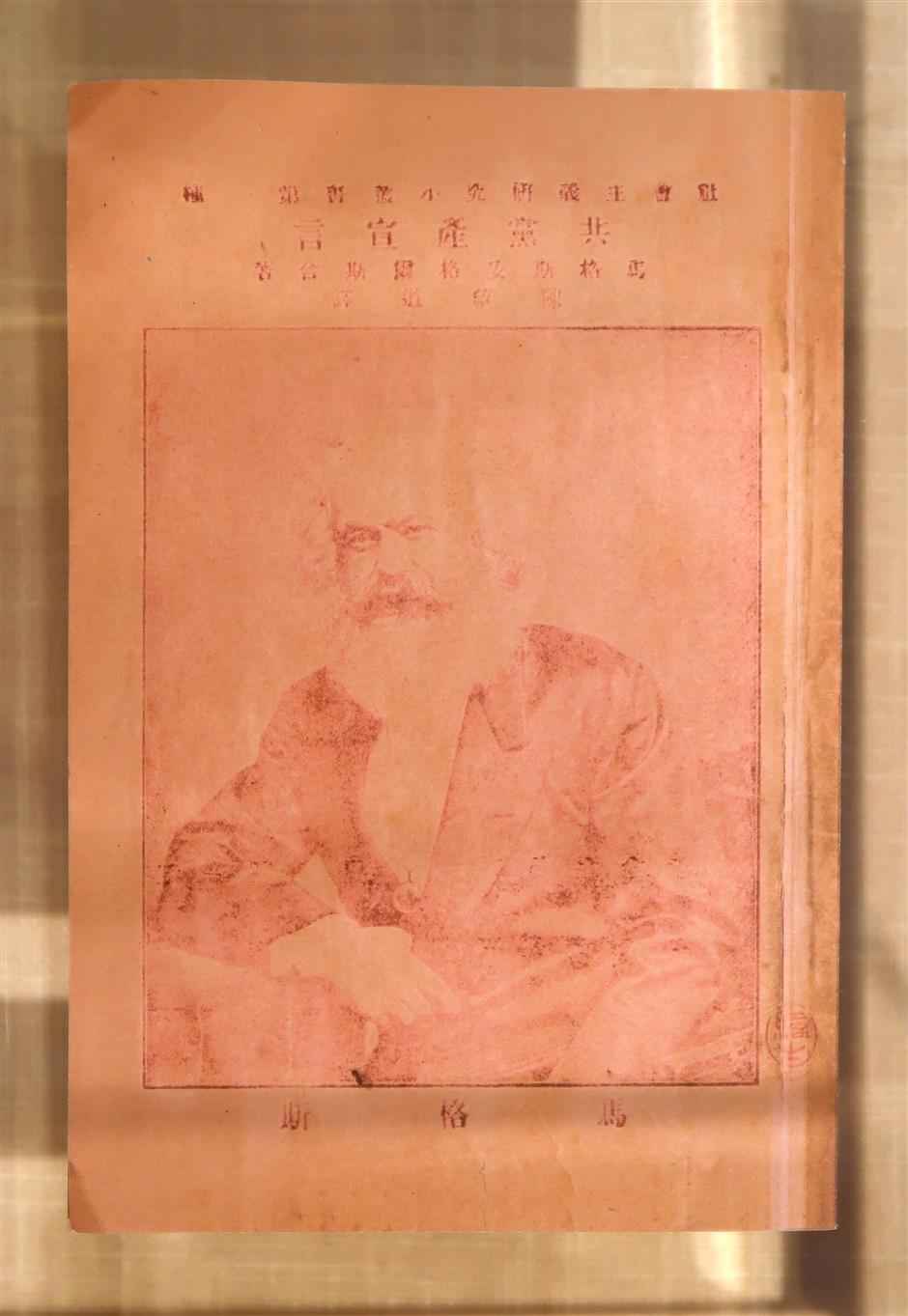 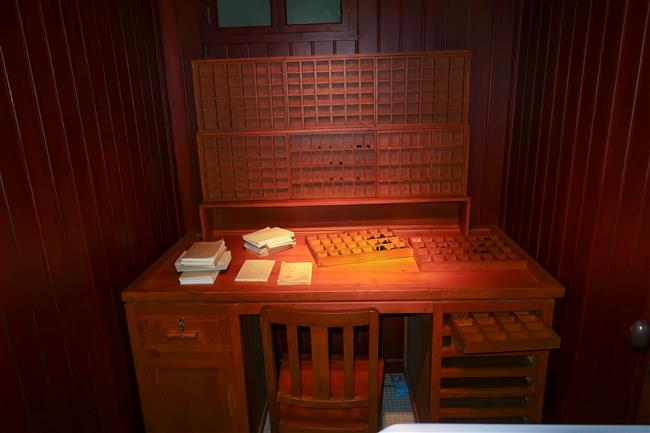 A replica of a desk at the Youxin printing press room, where the first Chinese version of the Communist Manifesto was published.

Chairman Mao Zedong told American journalist Edgar Snow in an interview in 1936 that Chen’s translation was one of the books that embedded belief in Marxism in his heart.

Less than a year after the publication of the Chinese translation, the Communist Party of China was established in Shanghai.

Chen helped organize the Party’s First National Congress and was appointed first general secretary of its Shanghai Committee. He later organized several Chinese publications to promote Marxism in China and taught in several schools, including Shanghai University and Fudan University.

He began his career at Fudan as a teacher of Chinese rhetoric in 1920 and was appointed by Chairman Mao as university president in 1952.

When the university offered him the building as his residence in 1956, he refused. His son, Chen Zhenxin, recalled that his father believed the house, covering more than 300 square meters and having 10 rooms, was too large for his family of three.

Later he accepted a solution that used the first floor as a research center for grammar, logic and rhetoric while his family lived on the second and third floors.

He lived there until he died in 1977. The research center later developed into the current Institute of Chinese Language at Fudan.

Now, the first floor hosts a permanent exhibition for The Communist Manifesto. 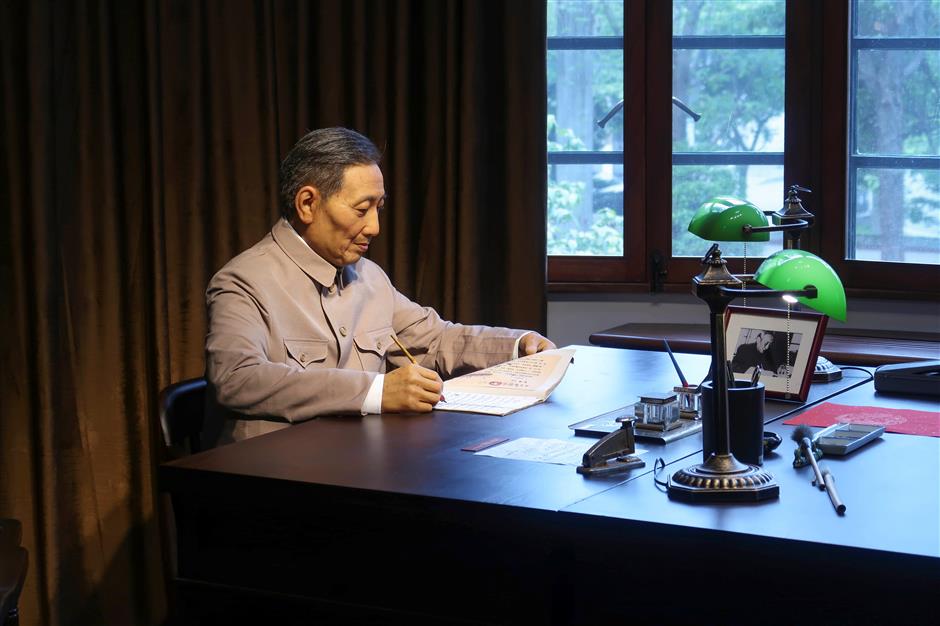 When visitors enter the building, they can see a relief sculpture of Marx and Engels made up of characters from the Chinese translation.

At the center of the main exhibition hall is a replica of Chen’s first version, with the wrong title. It’s a duplicate of a copy preserved at the Shanghai Library.

“Only 11 copies of the historical version remain and we have four of them, kept as precious rare books,” said librarian Chen Chao.

The building also showcases various versions of the manifesto in different languages, including the original German version reprinted in 1978, an English version published in 1915 and a French one in 1901.

There is also a Japanese version translated by Kotoku Shusui and published in a Japanese journal called “Socialist Research.” It is believed that Chen used this version to create the Chinese version. 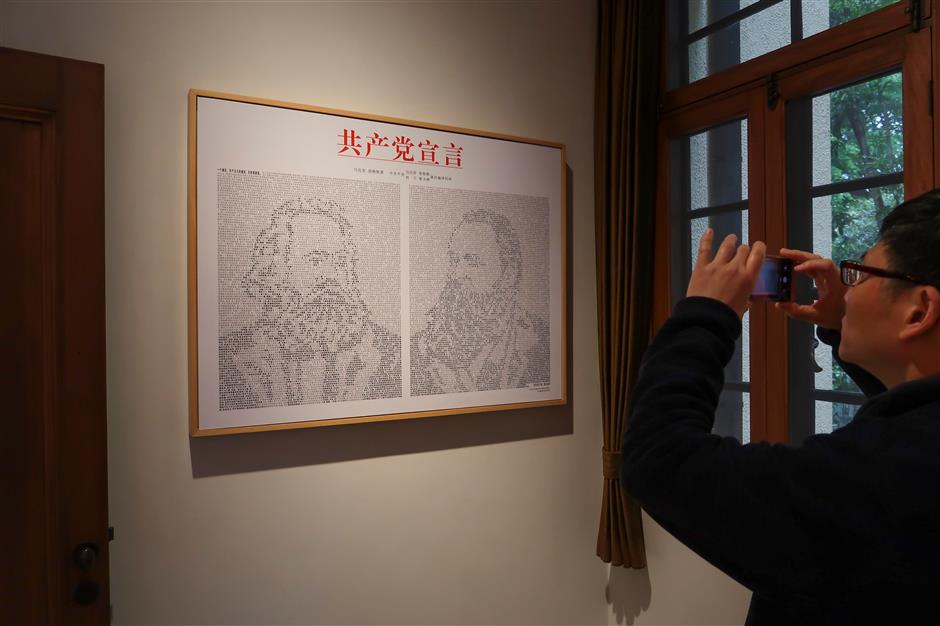 A relief sculpture of Marx and Engels made up of characters of the Chinese version of the manifesto.

A large picture on the wall tells an interesting story about Chen when translating the manifesto.

When Chen was working at home in the spring of 1920, his mother put zongzi, traditional glutinous rice dumpling, together with a bowl containing brown sugar on his desk. She called out to him, asking if there was enough sugar and Chen answered it was sweet enough.

But when she came back to the room, she saw Chen’s lips covered with ink. Chen should have dipped the zongzi into the sugar before eating, but he mistook the ink stone as the sugar bowl without realizing his mistake.

When the story was quoted by President Xi Jinping, he called it “the taste of truth.” 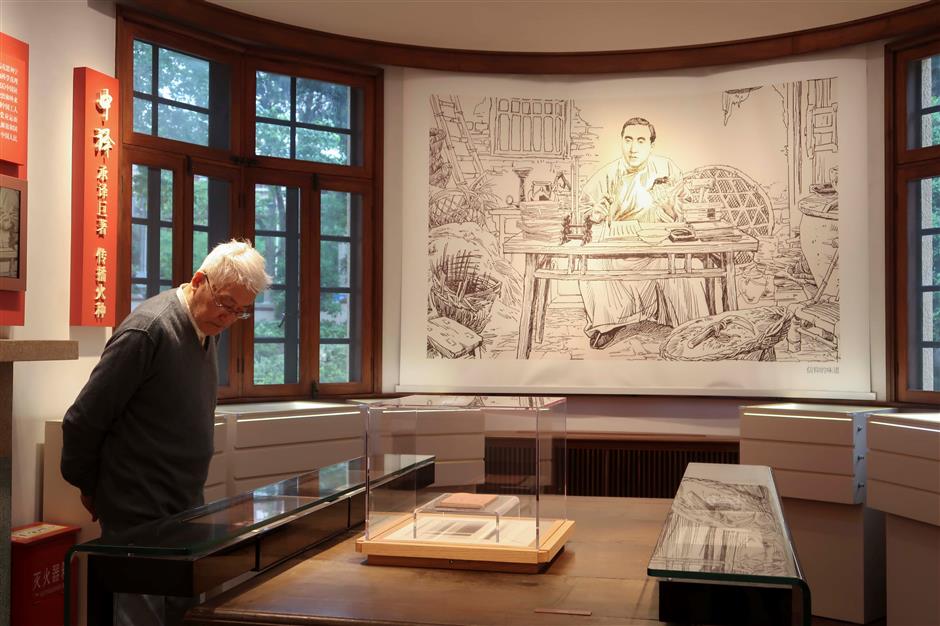 A large picture on the wall tells the story of how Chen was so engrossed in his work he mistook ink for sugar when eating zongzi.

On the second and third floors, visitors can see Chen’s personal items, including the letter of appointment signed by Chairman Mao, the bowl and ink stone he used, school badges, family photos and briefcases, as well as the furniture used by the family.

A garage beside the building is now a cinema showing two films about Chen and the manifesto.

Chen had said: “I believe in Marxism …. I will work for the Communist Party as long as I live.” 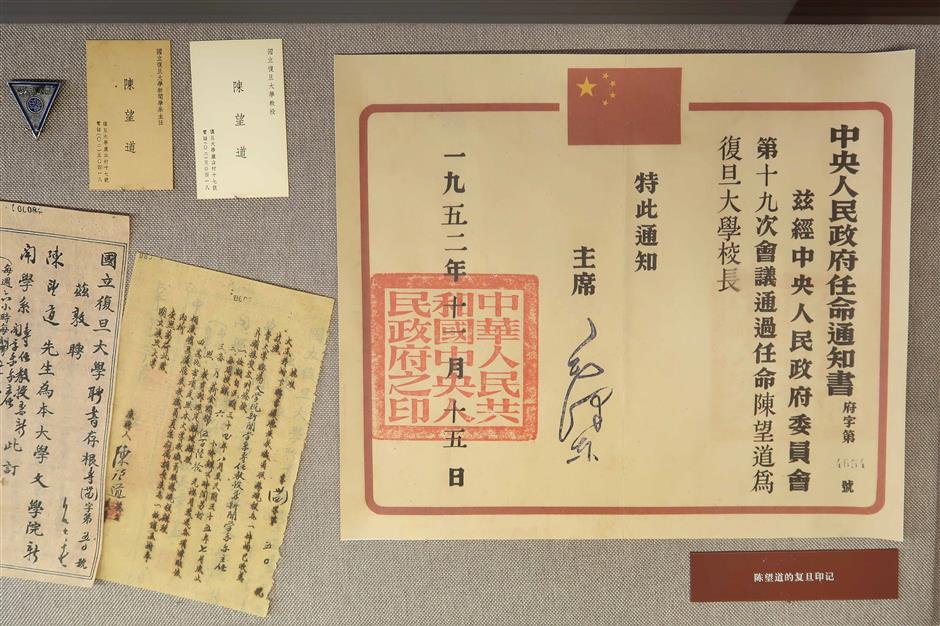 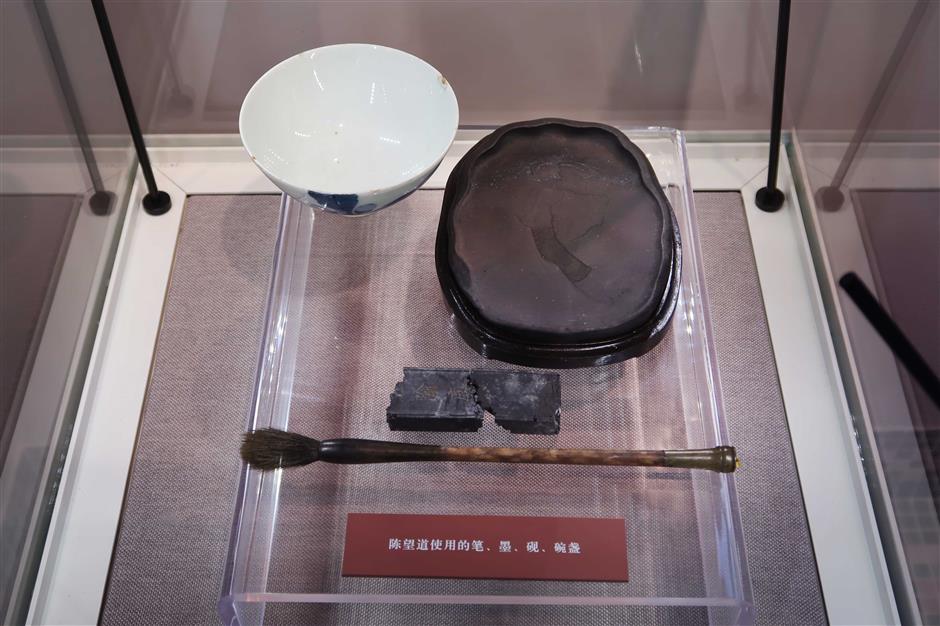 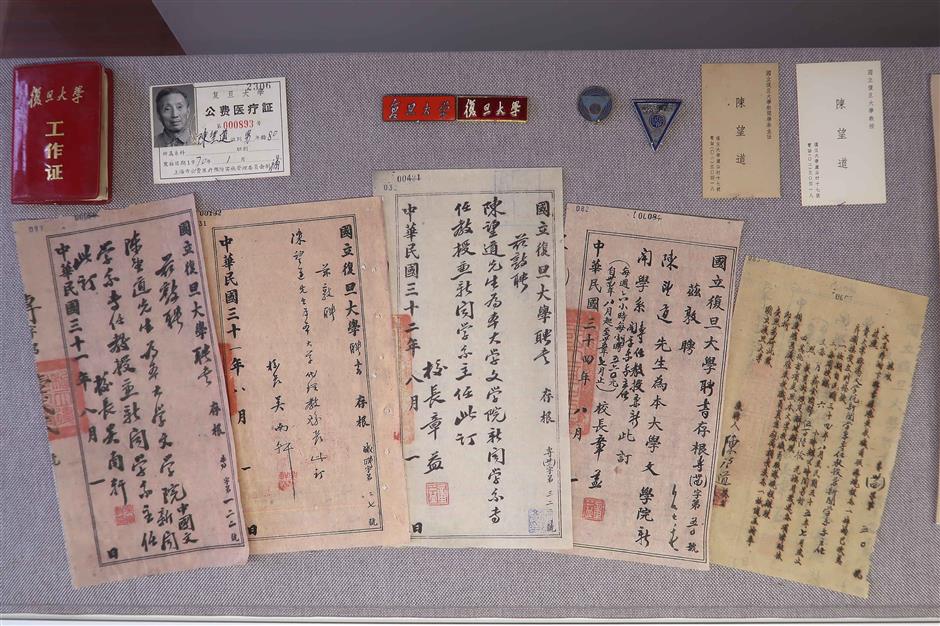 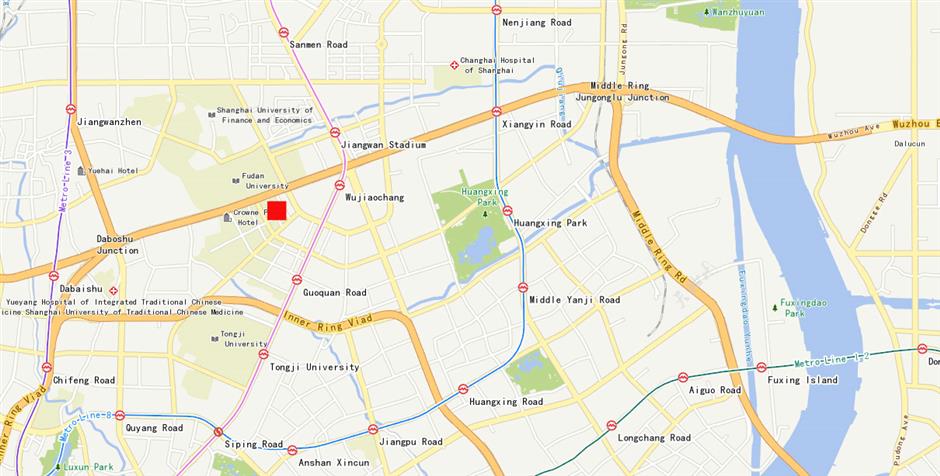 The venue is on Guofu Road and is close to Fudan University in Wujiaochang area.

Reservation: Only 10 people are allowed inside at a time. Groups of five or more will have to make reservations by calling 021-65642527.

Guide service: Volunteers will provide a free guide service for group visitors. Currently, the service is only in Chinese, but English and other languages will be available in the future. 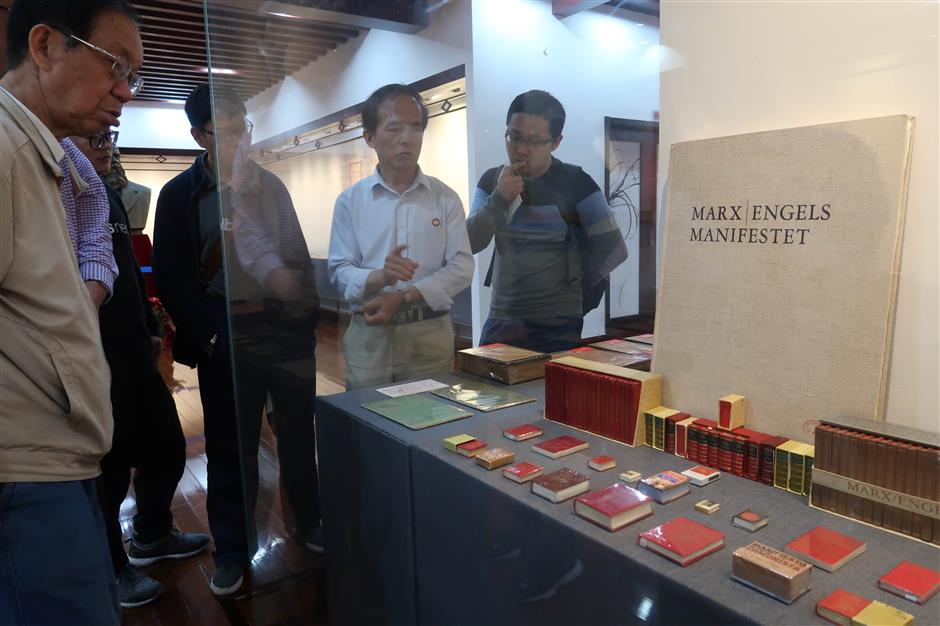 More than 2,200 versions of The Communist Manifesto are on display at the Fudan University museum.

The exhibits include a version published in 1872 with preface written by Marx and Friedrich Engels.

The smallest version on display is from Hungary. It is 2.5 centimeters long by 2 centimeters wide but contains the full text.