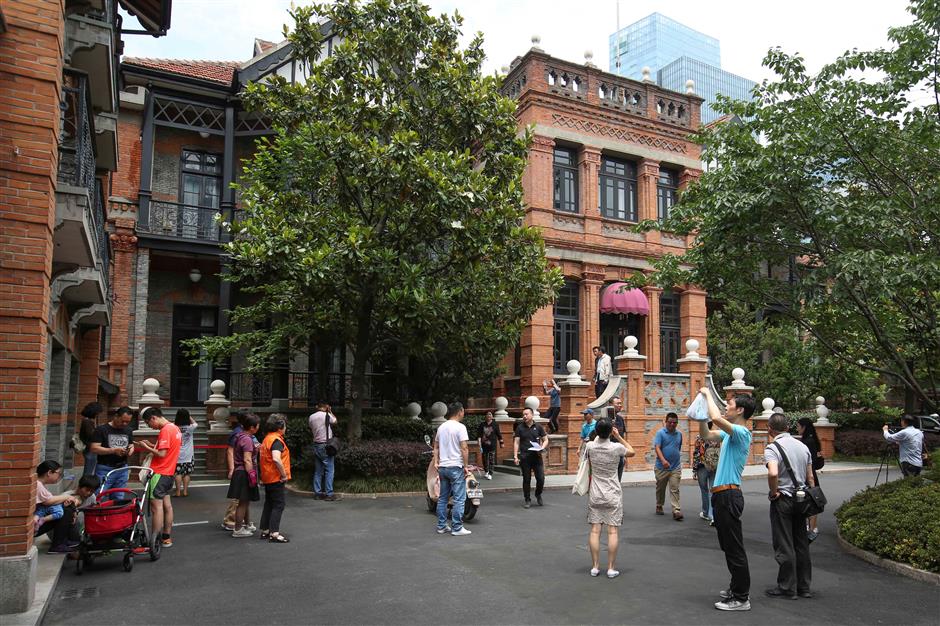 People taking pictures at the Drummond Apartment on Saturday.

Shanghai residents flocked to the city’s historic buildings over the weekend as the country celebrated the annual Cultural and Natural Heritage Day.

As part of events for the holiday, 97 local historic buildings opened free to public, some for the first time in decades.

The procuratorate of Huangpu District, located at 22 Jianguo Road M., was one of the buildings welcoming the public free of charge on Saturday. Normally, its doors are closed to visitors and those not on official business.

Liu Jing, deputy procurator general of the procuratorate, was among those who volunteered for guide duties on Saturday. When he arrived at the building at 7am, there was already a line outside the door.

“All 300 free tickets to visit the building were booked within 15 minutes after we started to accept reservations on June 7,” said Liu. “We offered another 100.”

The procuratorate also allowed people without tickets to enter if they showed ID. “We anticipated about 300 would come,” said Liu. “It turned out more than 300 lined up outside the gate just in the morning.”

The buildings was once home of the former French Concession Mixed Court and Police Station. The neo-classical style complex was completed in 1918, and was originally used for trials involving both Chinese and foreigners. The police station located next to the court once held Chen Duxiu, one of the founders of the Communist Party of China, among other notable figures.

Three cells are preserved in their original condition, and contain pictures and photographs reminding visitors of darker times in Shanghai’s history.

“The buildings epitomize history and you can only truly feel it after seeing the cells and the court,” said Li Lihua, a history buff. “It’s a pity that the buildings are open to the public only today.”

As Liu explained, the procuratorate is a place of official business and it’s unlikely that the building will open on a more regular basis to the public.

Another building which opened on Saturday was the Drummond Apartment, located on Huashan Road in Jing’an District.

The English Renaissance-style villa was built in 1917 by Price’s (China) Limited, a subsidiary of London-based candle maker Price’s Candles. Now, it is used by local firm Bright Dairy.

The Drummond, which opened to the public for the first time, was also a hit with visitors.

Retiree Ye Hegui came with 30 members of his cycling club. The group met at the villa around 8:30am.

“We thought we arrived early but still had to wait in a line,” said Ye.