Taking to the skies in the 787 Dreamliner

One of Boeing’s catchphrases for the 787 Dreamliner is “helping aviation dreams take flight,” and that’s exactly what happened for me on Friday.

Known for its fuel efficiency and flexible range, the 787 is opening up new opportunities for airlines and passengers alike. On Friday I had the chance to fly one, sort of, at the Boeing site of the China International Import Expo.

Boeing has quite some history in China. Their first aircraft to serve the skies of the Middle Kingdom, a 707, touched down in 1972. In 2013, the 1,000th Boeing plane was delivered here, making China the first ever country to have that many planes. By the end of the year, the US plane maker will deliver its 2,000th plane.

I’ve always been a fan of Flight Simulator, the realistic flight game, and often fancied myself as that guy who could rush the cockpit after both pilots choked on their coffees and land the plane in one piece, saving the day.

I seriously doubt it would be that easy, but my ego was boosted slightly on Friday when Mark Fife from Boeing sat down with me in the 787 simulator here at the import expo to try my best at landing the plane from the captain’s seat.

To my surprise I found that many of the flight controls needed to land, like the flaps (they need to be set to 30 for landing), speed brake, and landing gear, were all as they should be according to the game.

But it turned out I didn’t need them because, according to Fife, most things can be done automatically now. The flaps will gradually reach 30 based on altitude and speed, the landing gear will drop on its own, and we don’t even need to steer the plane in. But what fun would that be for me in the pilot’s seat, right?

I was nervous and my hands were a bit sweaty as we made our manual approach to Boeing’s base in Seattle. “I’m way too high!” I told my co-pilot. “Don’t worry,” he assured me, “because the runway is quite long.”

Like any good co-pilot, Fife kept me calm and reassured me as we lined up for final and were coming in a little too high.

Pretty soon we touched down, albeit a bit rough, and my co-pilot congratulated me.

“So we didn’t die,” I laughed. “No, actually it was a great landing!” Fife said.

I noticed at that moment that Jack, our cameraman, was perhaps out of earshot. “Can you say that again?” I asked Fife. I needed that evidence.

Now at least if the robots take over Shanghai Daily, I might be a shoe-in with Boeing! 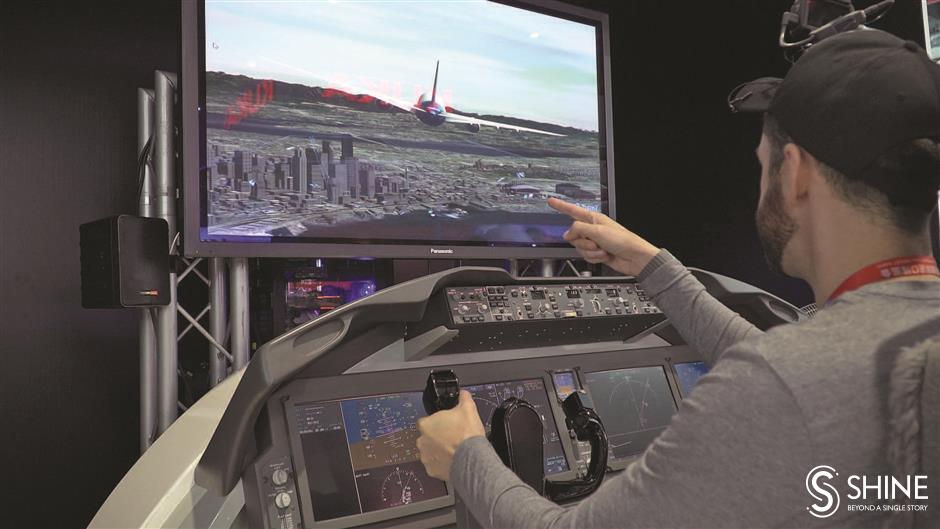 Andy Boreham fulfills his dream of being a pilot in a 787 simulator at the Boeing site of the China International Import Expo.