Some multinational companies in Shanghai are joining in the government’s efforts to promote garbage sorting to their own employees.

The city enacts its first domestic garbage management regulation on July 1, requiring garbage to be classified into four categories before it is binned.

German chemical group Wacker finished the placement of different bins inside its office building on Hongmei Road as early as June 14. 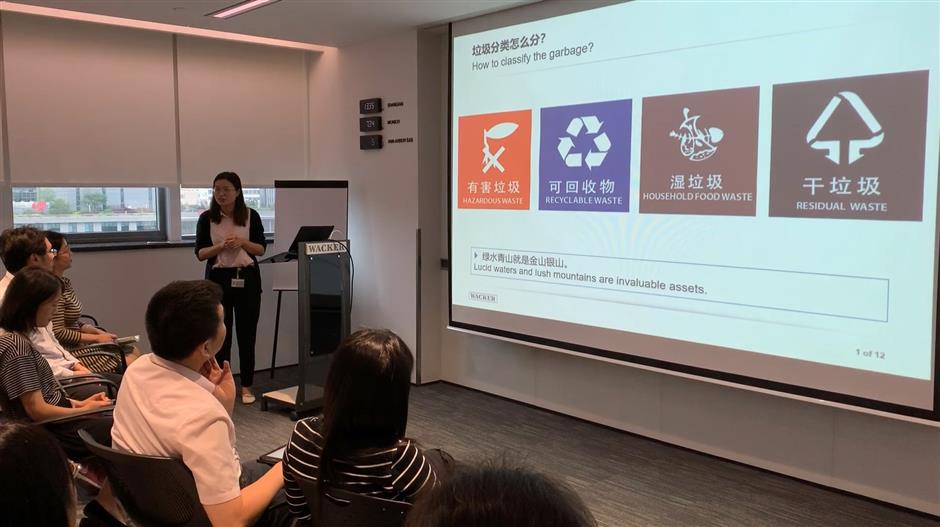 An internal training session is held at the office building of German chemical group Wacker on Hongmei Road, Xuhui District on June 25.

The company also hosted several training sessions for its employees, including cleaning staff. Small gifts were given after they finished a quiz at the end of each session.

“Waste sorting in Germany ... has been going on for decades,” said Paul Lindblad, President of Wacker Chemicals China. 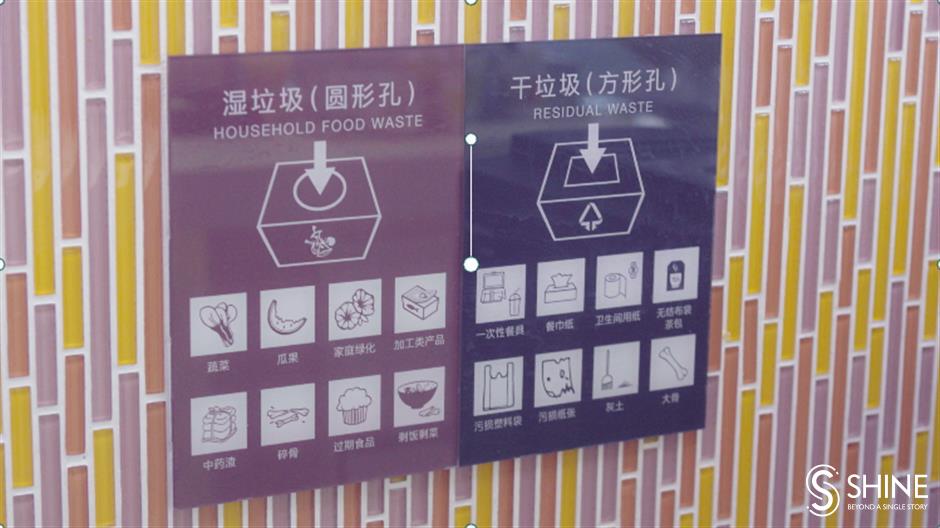 Signs indicating different waste are placed above the bins at the office building of German chemical group Wacker on Hongmei Road.

“The benefit of moving it (waste sorting) to the front, to the consumers, is that we actually see the type of waste we are creating, and hopefully (it can) put pressure on the producers of the waste to reduce it because we are more sensitive to it,” Lindblad said.

French cosmetic giant L'Oreal has created an online platform for its employees in China to learn about waste separation.

"We have a quiz and an online game which everybody is playing to ensure awareness is high," said Jean-Marc Cazenave, L’Oreal China Sustainability Director. "We want all L'Oreal employees to be experts so they can pass the information on to consumers." 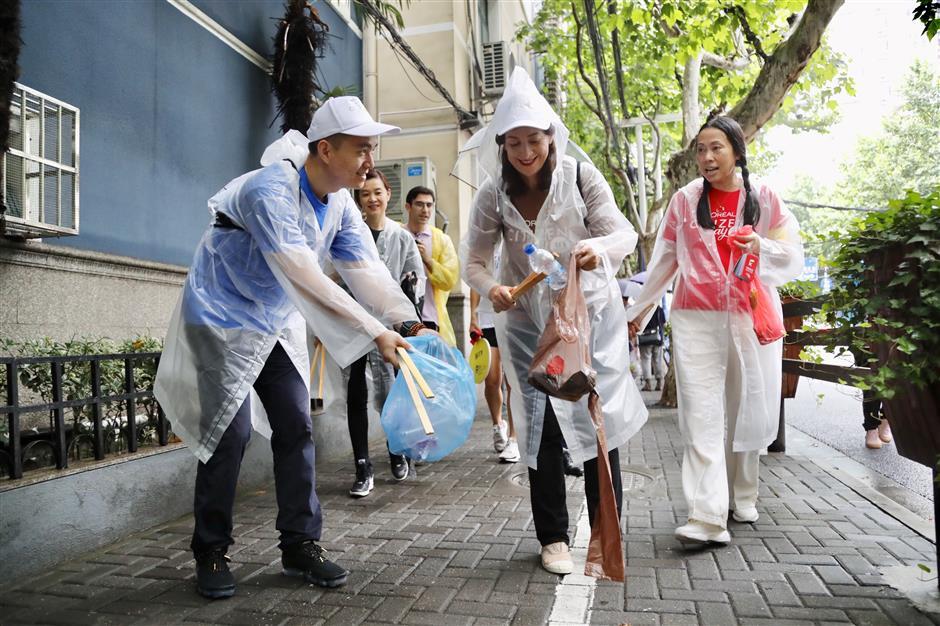 Joggers pick up waste during the "Plogging" campaign on June 21.

"We have already had four types of bins at our offices, so that all employees are aware of different categories," Cazenave said.

On June 21, nearly 1,000 L’Oreal China employees participated in a "Plogging" (jogging while picking up trash) campaign in Jing’an District to promote waste sorting, as part of the 10th anniversary of L'Oreal China Citizen Day.

US auto company General Motors has also paid a lot of attention to waste sorting.

Different bins have been set up inside the office and canteen of is China headquarters in Shanghai, and there are special staff ready to help.

To promote waste sorting, the company has also hosted many creative games and activities to spark employee interest. 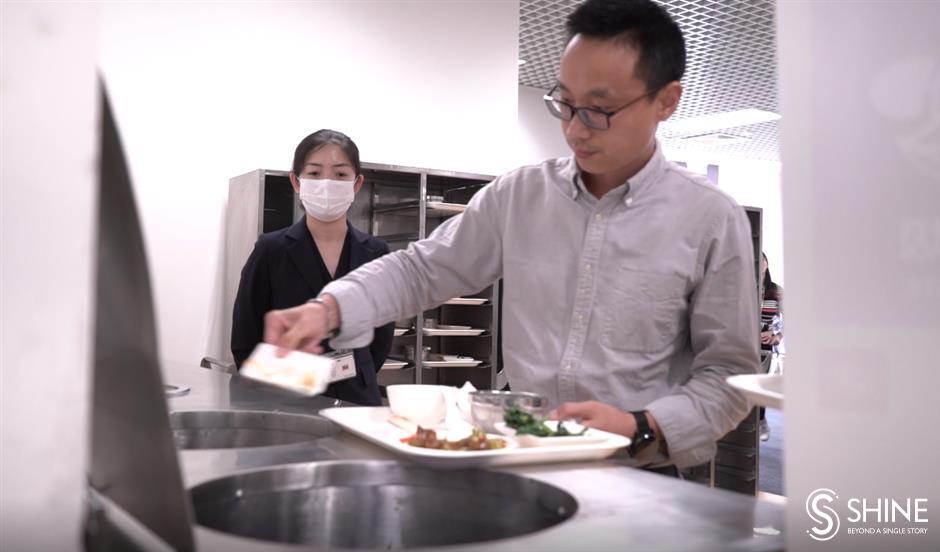 An employee sorts food waste in the canteen of General Motors China's headquarters in Shanghai.

“Most of our employees are willing to do this (sort waste), but it’s still a little hard for them to identify all kinds of waste, since there are so many kinds of garbage in our life, and some of them are really hard to classify,” said Shirley Chen, Manager of GM China Environmental Group.

"In the future, we will do more promotion to help our employees, and we also encourage them to go out of the office to sort garbage, so that we can create a better environment for our company.” 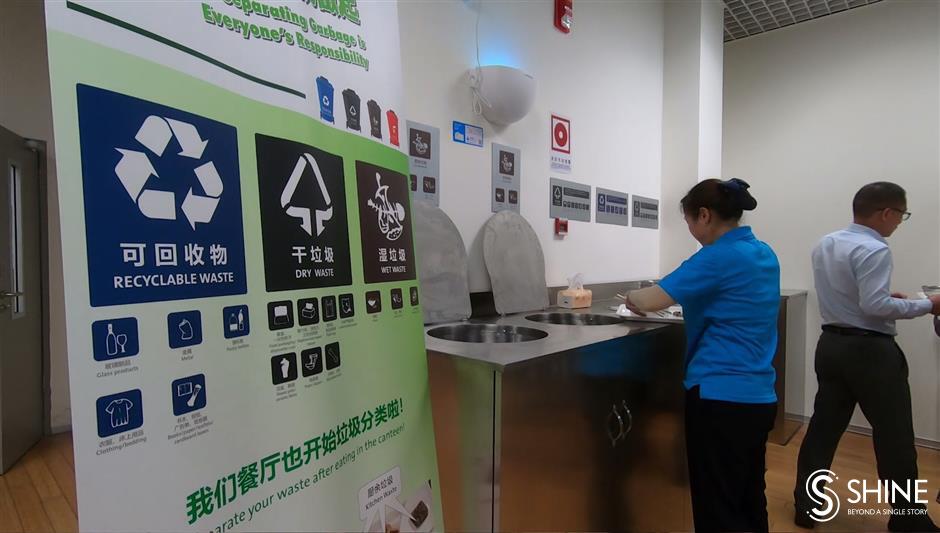 A poster about garbage sorting stands beside the bins at the canteen of General Motors China headquarters.