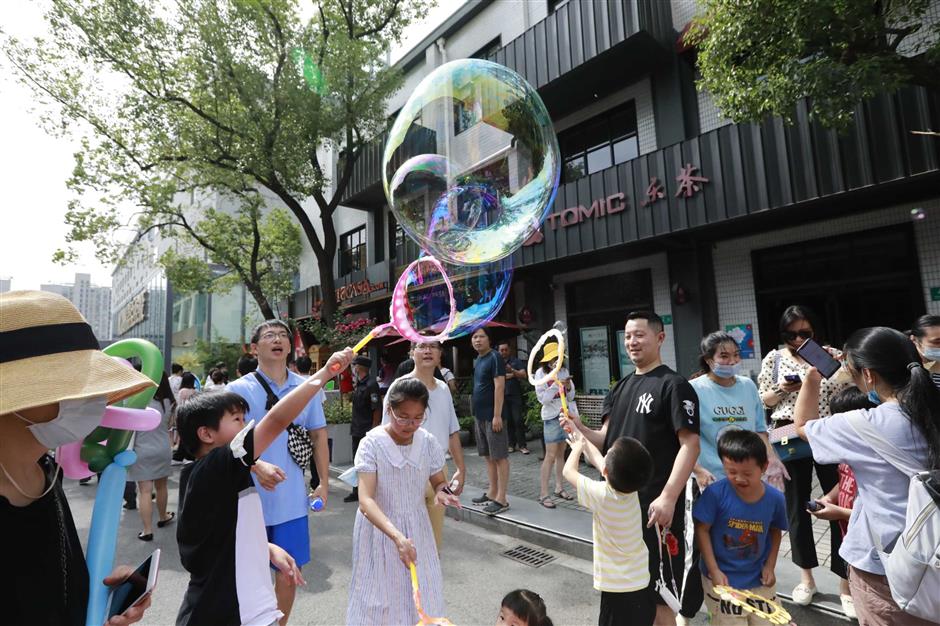 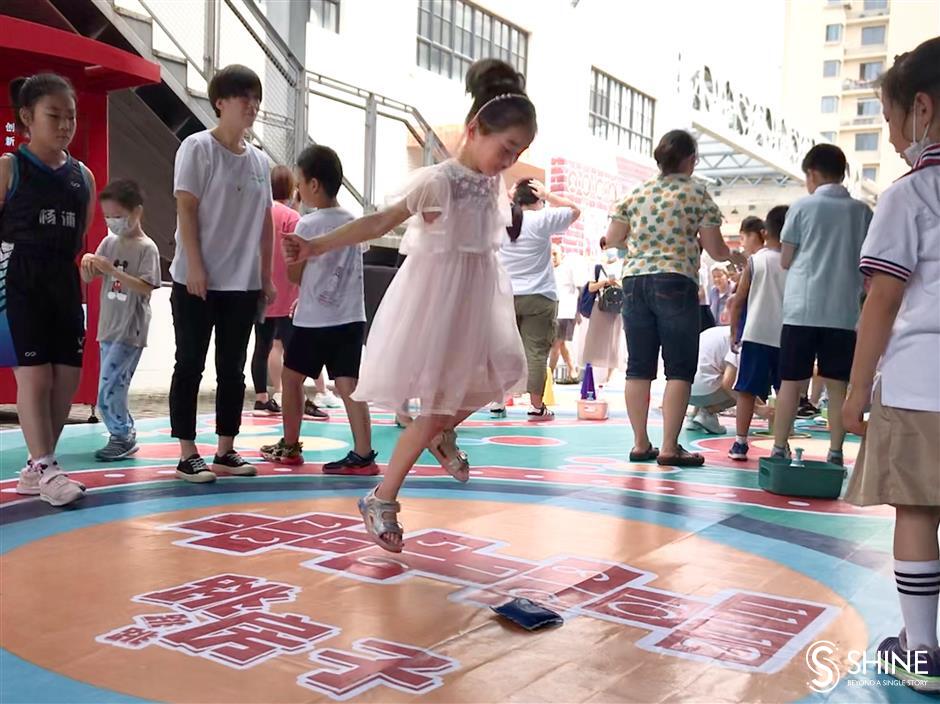 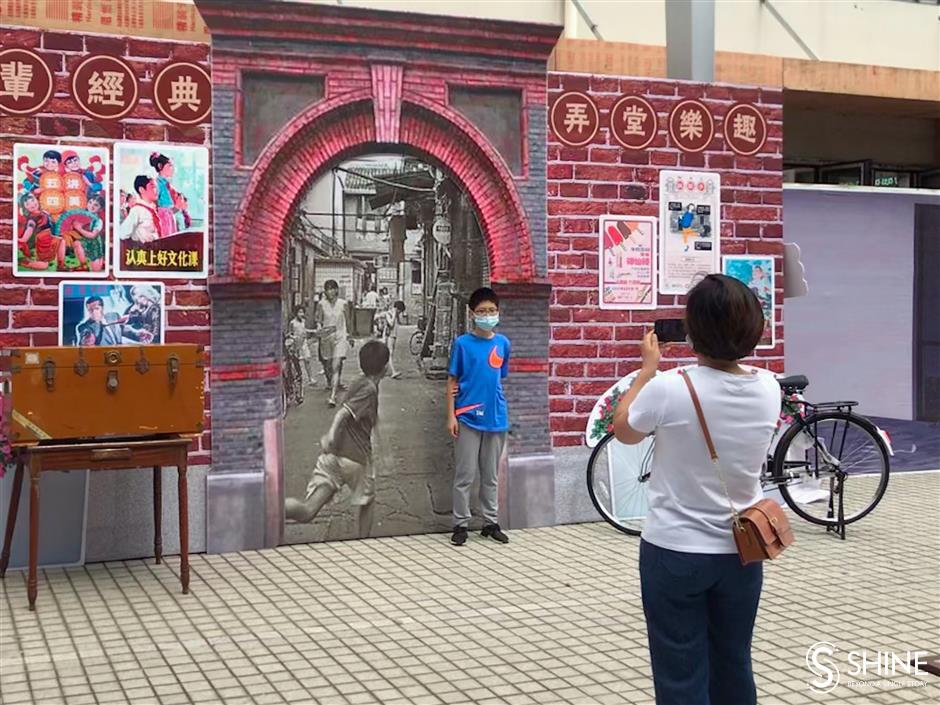 A woman takes photo of her son against the backdrop of design of an old alley.

A retro-style garden party was held at the Changyang Campus on Saturday, raising the curtain on Shanghai's 18th Family Cultural Festival.

Stalls were put up across the campus, formerly a cotton mill built in 1920 and now a creative park, offering a wide range of interactive activities.

Children had the chance to experience outdoor games, such as hopscotch, ring tossing and rubber band skipping, that were traditionally played in longtang, or alleys, in old shikumen neighborhoods by their parents when they were young.

At the street corner, clowns made balloon flowers for children, and soapy water was available for children to make bubbles. Dragon and lion dancing was also popular among children. 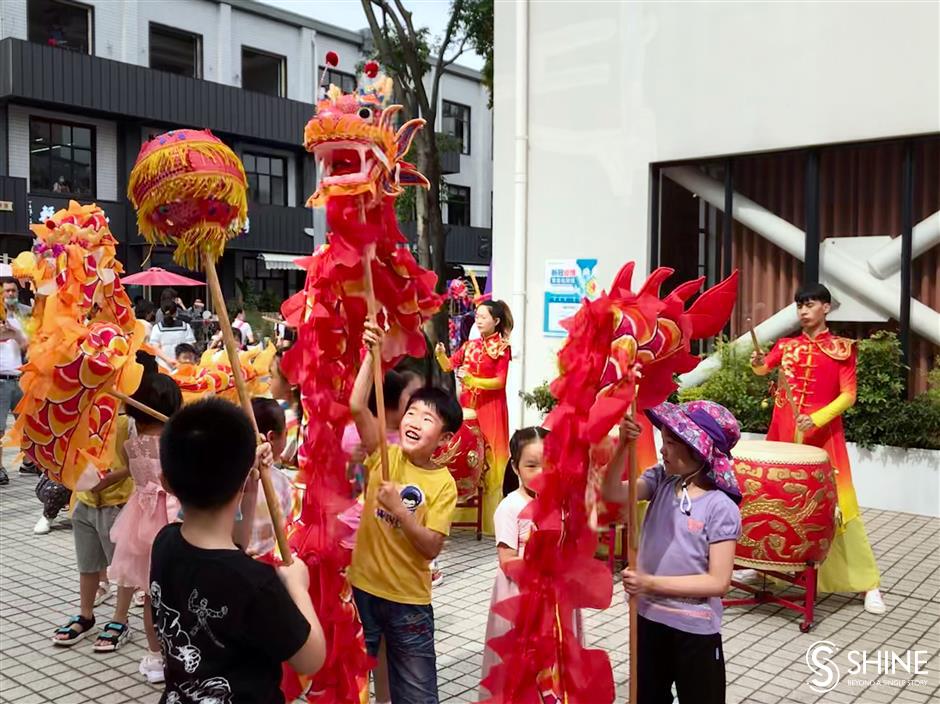 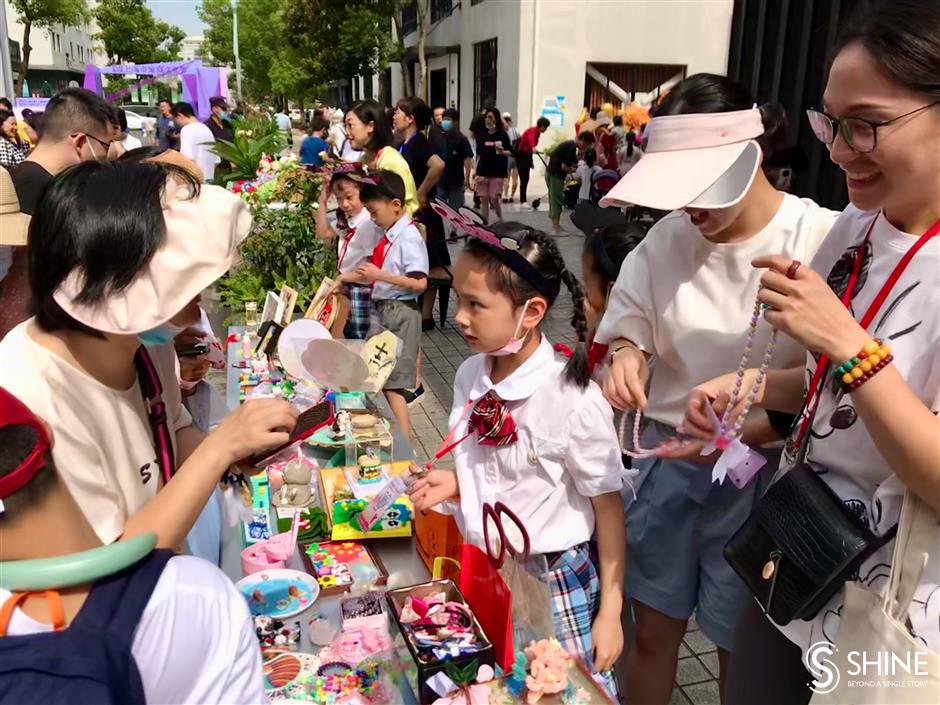 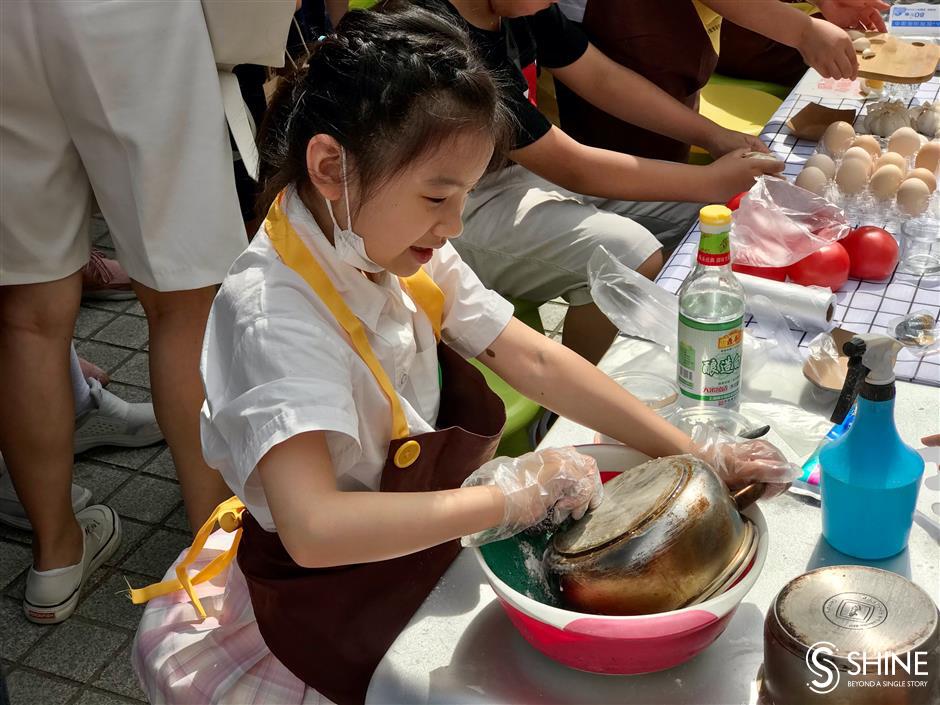 A girl learns how to use white vinegar and baking soda to clean a pot.

The garden party was more than just fun. There were some "edutainment"- themed activities on offer.

Combining education and entertainment, it allowed children to take part in competitions such as who peels eggs first and who washes dishes cleaner. The aim is to encourage them to take part in housework at home.

Also, local pupils held a charity bazaar selling their handicrafts to their peers. The revenues were all donated to the Shanghai Children's Foundation to help poverty-stricken female students in the remote regions of Yunnan Province.

According to the Shanghai Women's Federation, the festival will last to October, and activities like this will be held across the city. 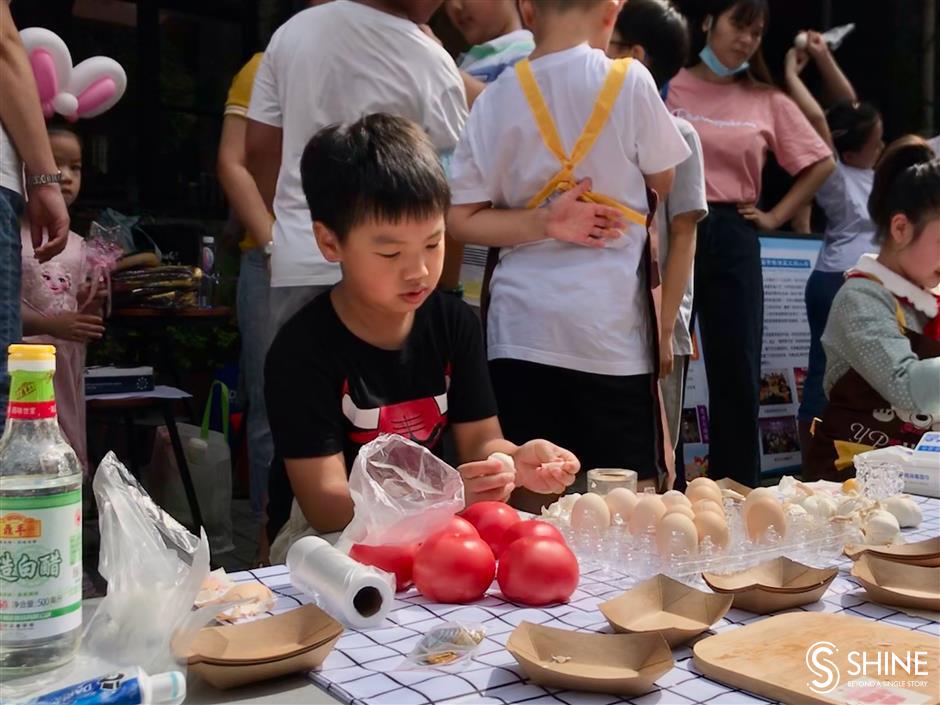 A boy immerses himself in peeling garlic. 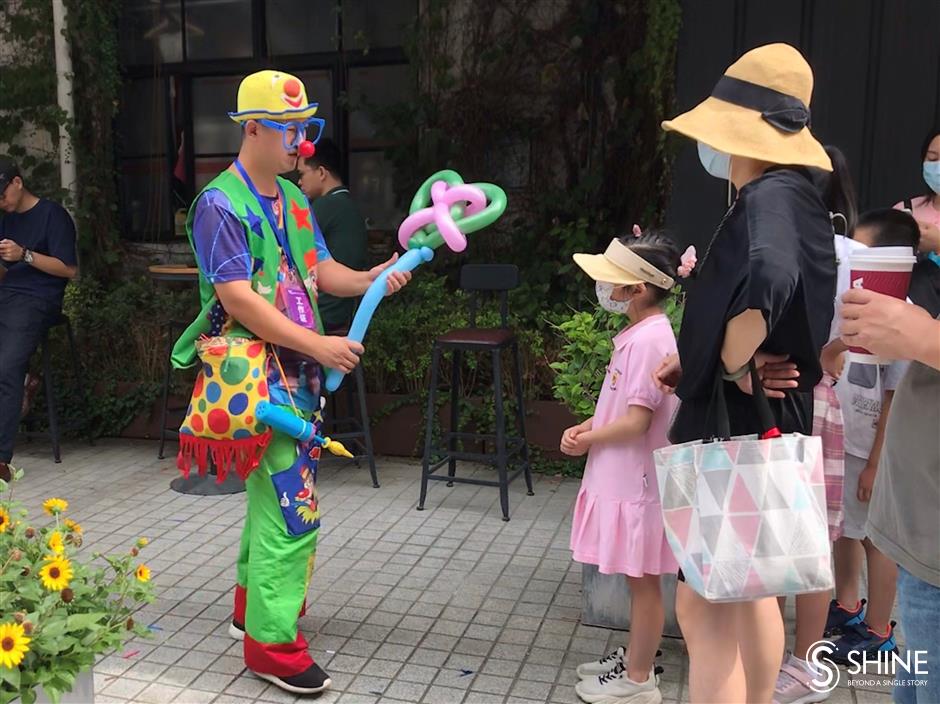 A clown makes a balloon flower for a girl. 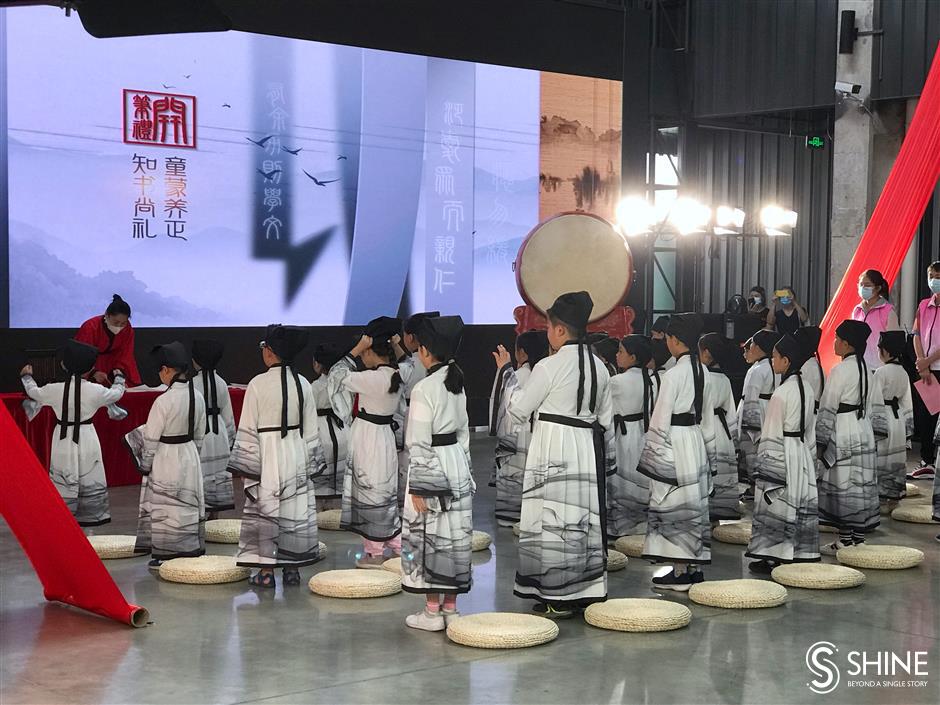 At the opening ceremony, this year's 199 "most beautiful families" of Shanghai were also announced.

They include doctor Miao Xiansheng who volunteered to work in the Xizang Autonomous Region to assist with echinococcosis screening, and Bian Weitang who worked in a no-man's land for more than 10 years for nuclear bomb research.

Representatives of this year's Shanghai's "most beautiful families" receive their honors.