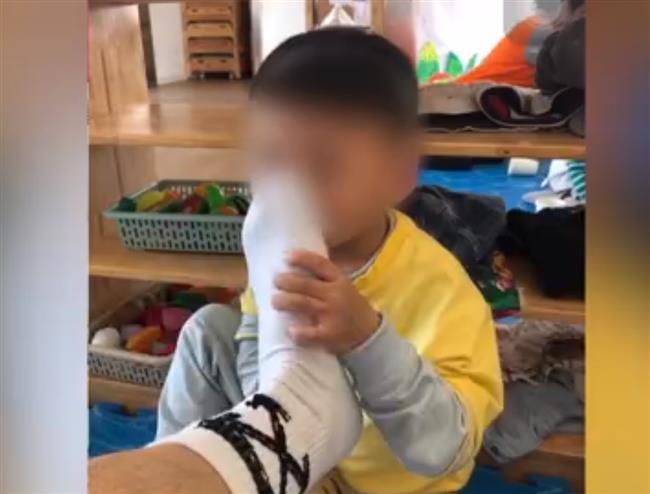 An assistant teacher at a kindergarten in an eastern Chinese city was fired and received seven days of administrative detention for posting pictures of a boy smelling his foot on social media.

The man surnamed Liu of RYB Chengdong Kindergarten in Ruijin, Jiangxi Province, posted three photos of a boy smelling his foot on WeChat Moments on April 12, saying “train somebody to be an ‘M’ from childhood.”

In the language of the Internet, “M” could refer to masochist. He said he blocked his supervisors and the boy’s parents from seeing the post.

The post quickly triggered outrage and prompted the local city government to launch an investigation.

That day, Liu took off his shoes and entered the play area with several children. After some of them complained that his feet smelled, he asked a child to smell his foot and take some photos, Ruijin’s publicity department said in a statement on April 13.

The kindergarten was given a warning and ordered to conduct a rectification.

This is not the first time the kindergartens under New York-listed RYB Education have been embroiled in a scandal. A teacher of a RYB Kindergarten in Guangzhuang, Beijing, was convicted of abuse for using needles to prick children in November 2017. A foreign teacher at RYB Qingdao Vanke City Kindergarten was arrested for molesting a girl in January 2019.

RYB Education said in a statement yesterday that no coercion, abuse or molestation was uncovered. However, the assistant teacher’s improper behavior seriously violated the norms and ethics of teachers.

Song Chunlei, a lawyer with Ganus Law, said Liu’s behavior constituted molestation because of what he said in the online post, according to news portal iFeng.com.

“It was not a simple game," Song said. "He treated the boy as an abuser and the behavior served the purpose of satisfying his abnormal sexual desire."

If a court convicts him of sexual harassment, the boy’s parents are entitled to demand compensation from the kindergarten, he said.