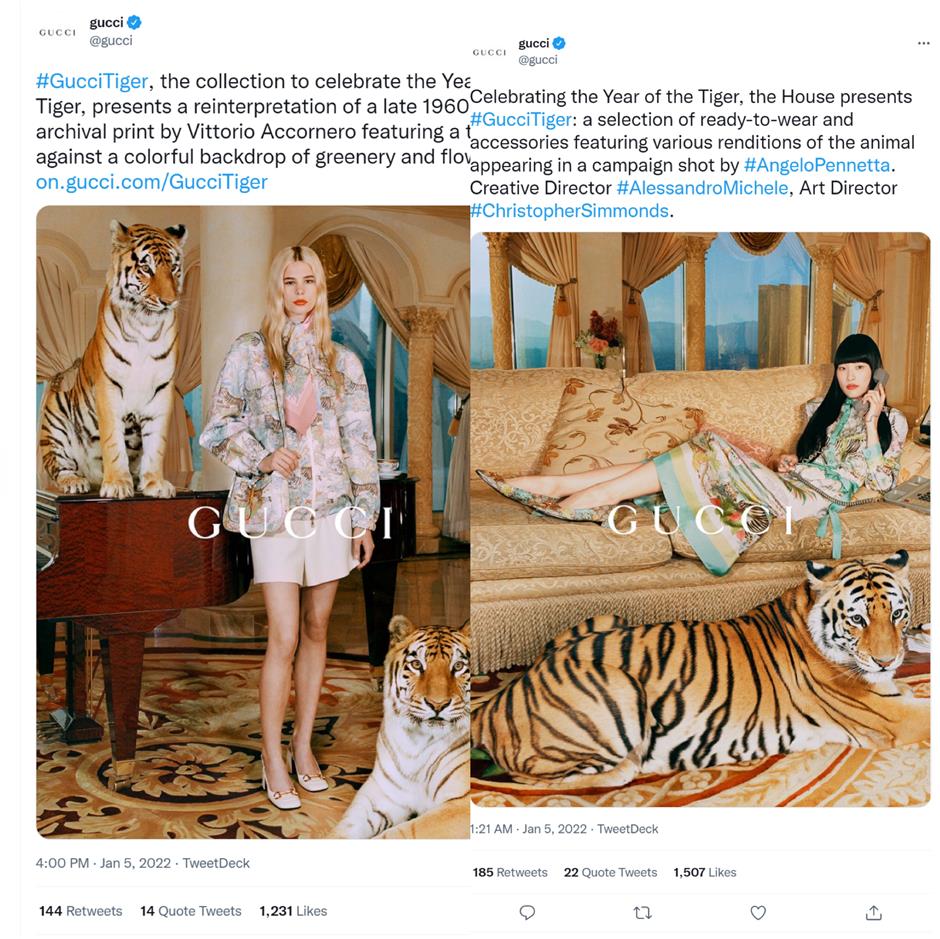 As usual, with the Lunar New Year approaching, luxury brands are unveiling limited-edition collections, which this year is all about the Year of the Tiger. Gucci's tiger-themed collection features various renditions of the tiger appearing on clothes, shoes and accessories.

In the advertisements, tigers sit perched on a piano, lay prone on rugs or walk around as a group of models enjoy an afternoon tea party in a grand house. The tigers are seemingly their pets.

But the depictions soon drew fire on the Internet. Animal rights activities accused the Italian fashion house of using the tigers as props to promote its new collection.

Elisa Allen, director of People for the Ethical Treatment of Animals, or PETA, said: "Gucci is hopelessly out of touch with our current understanding of wild animals' needs and best interests."

The China Biodiversity Conservation and Green Development Foundation also released a statement in protest of Gucci's "exploitation of tigers."

"We are not opposed to filming wildlife in the natural landscape if it's within animal ethics. But we don't accept such commercial promotions," it stated on its Weibo account. "Gucci filmed tigers for commercial purposes, which violates business ethics and encourages illegal hunting and trading of endangered animals in a disguised form."

In its response to the outcry, however, Gucci insisted that "no animals were harmed."

"A third-party animal welfare organization, American Humane, monitored the sets on which animals were present and verified that no animals were harmed," it stated. "The tigers were photographed and filmed in a separate safe environment complying to Gucci's policies and then featured within the campaign."

It has also claimed that nature, wildlife and its denizens are particularly important to Gucci, which in February 2020 joined The Lion's Share Fund, a unique initiative raising much-needed funds to protect endangered species and their natural habitats.

In China, there was another heated debate over the tiger images.

Some netizens gave the thumbs-up for Gucci's use of real tigers but quite a few thought the tigers seemed as tame as cats, which didn't tally with the former's personality. "These luxury brands don't really understand Chinese culture. It's just so superficial," read one comment on Gucci's Weibo account.

And this is not the first time. In fact, many a luxury brands' special China-only collections have been considered ugly or unacceptable, such as Burberry's braided bag-like tote for the Year of the Ox or Balenciaga's tacky Qixi Festival promotions, to name a few.