The Shenzhen market watchdog said it had checked all supermarkets and their suppliers in the city and did not find any blue-ringed octopus after a person claimed he bought one at the city's Sam's Club.

The watchdog officials also searched the shelves and the storerooms of all 27 Sam's Club and Walmart stores on Wednesday and did not find any of the extremely poisonous octopus.

The market watchdog reminded consumers to be cautious about seafood safety and urged units to strengthen inspection of the products. People can tip off the authorities on food safety issues by calling 12345. 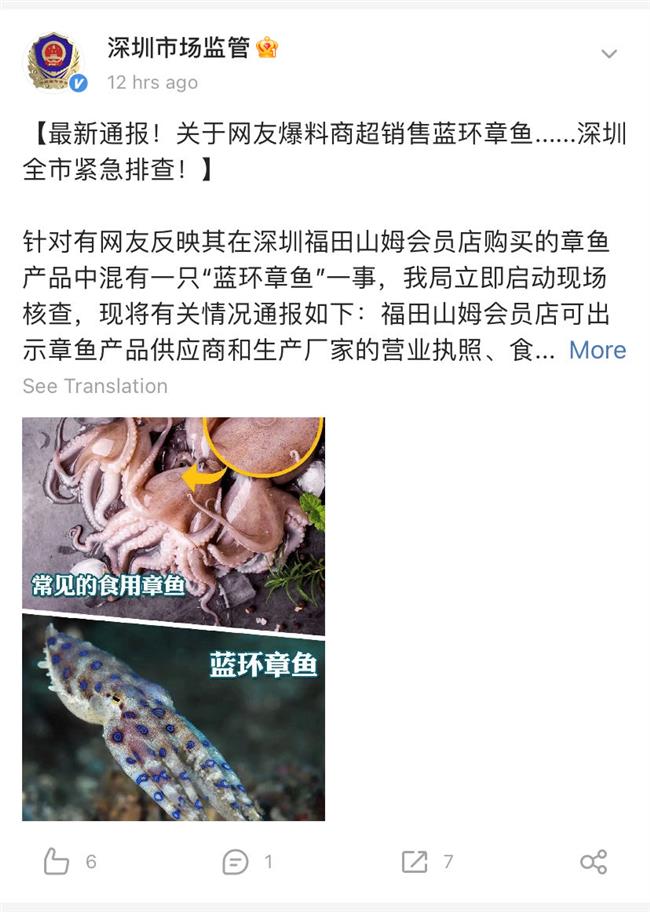 A Weibo user from Shenzhen, southern Guangdong Province, claimed on Wednesday to have bought a "blue-ringed octopus" along with octopus products at a Sam's Club in Futian, according to news portal chendu.cn.

"I bought it on the Sam's Club app on December 28 last year, and it was delivered by the Futian branch," the customer told news portal nbd.com. 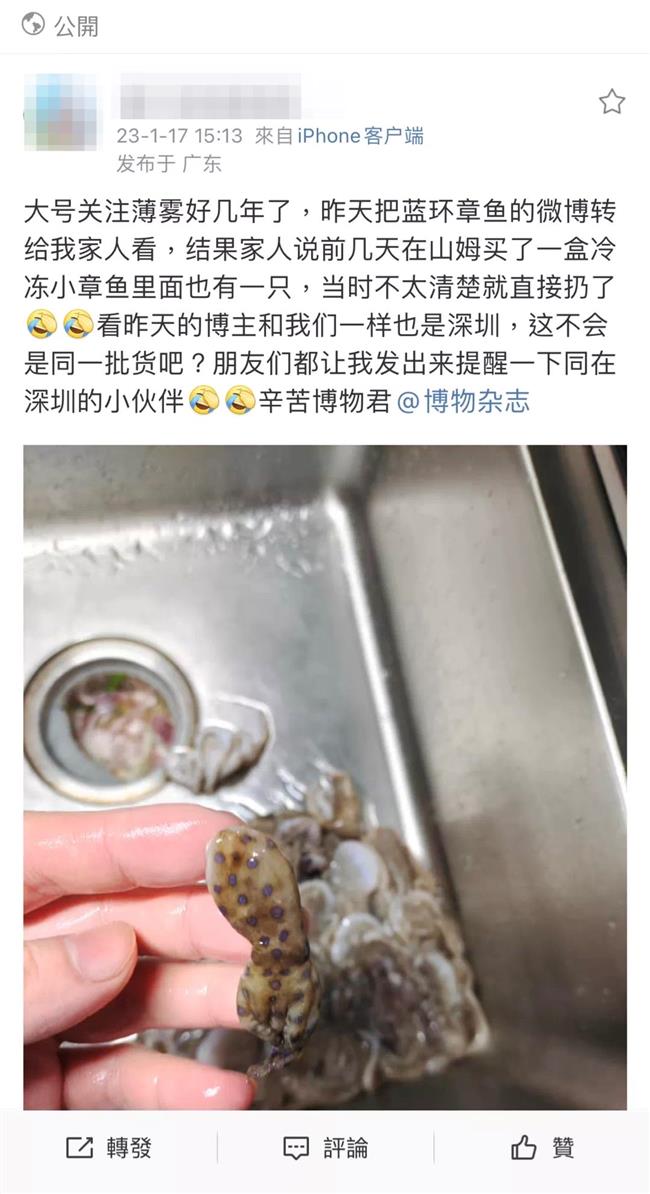 Shenzhen market watchdog immediately conducted checks but did not find any of the deadly octopus. Sam's Club Futian also had all the necessary documents, the watchdog said in a note on Thursday.

"We checked with our suppliers and confirmed that the products come from Chinese waters... To date, we have never received or heard about this particular variety of octopus from other customers," Sam's Club said in a statement.

Sam's Club also provided a note from the suppliers, who said that the frozen octopus supplied by them did not contain the blue-ringed octopus, the news portal nandu.com said. 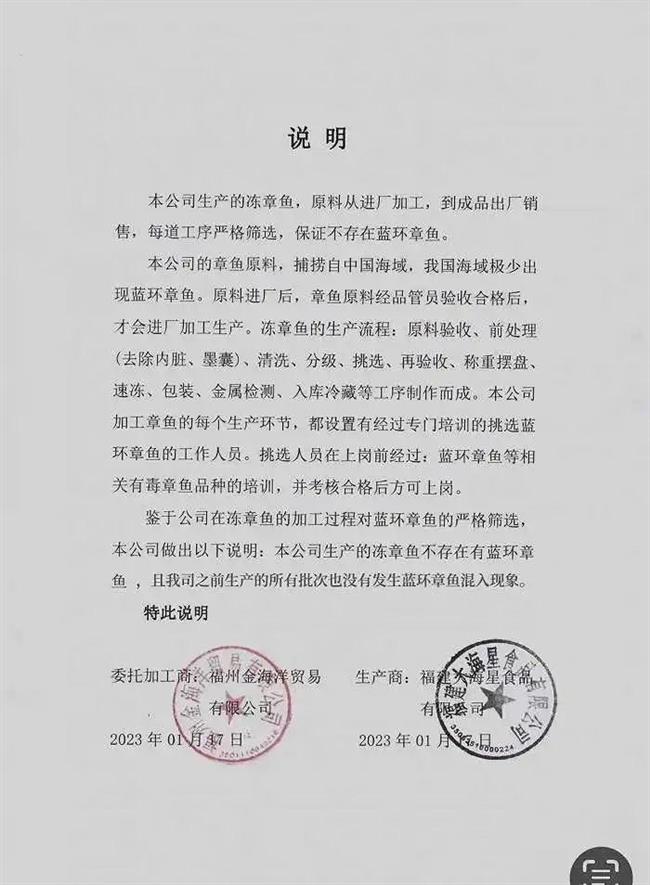 The note from the suppliers of Sam's Club Futian in Shenzhen

"Blue-ringed octopus may be caught by fishermen by mistake, but its pattern is easily recognizable," Professor Zheng Xiaodong of the Ocean University of China told the Beijing News. "They are scarce and not easy to catch."

"Processors screen the octopus they catch," a person who works in the seafood business told the news portal jiemian.com. "But because it is screened manually, there may be oversights."

The majority of octopuses with a single ring are short octopuses, one of the most prevalent species in the country. According to China Central Television, blue-ringed octopus is the collective name for octopuses in the species leopard's octopus that are coated with numerous blue circles, spots, or stripes.

According to China Fisheries, the toxin of the blue-ringed octopus is gradually metabolised by the body. If bitten, it takes three or four weeks to heal. 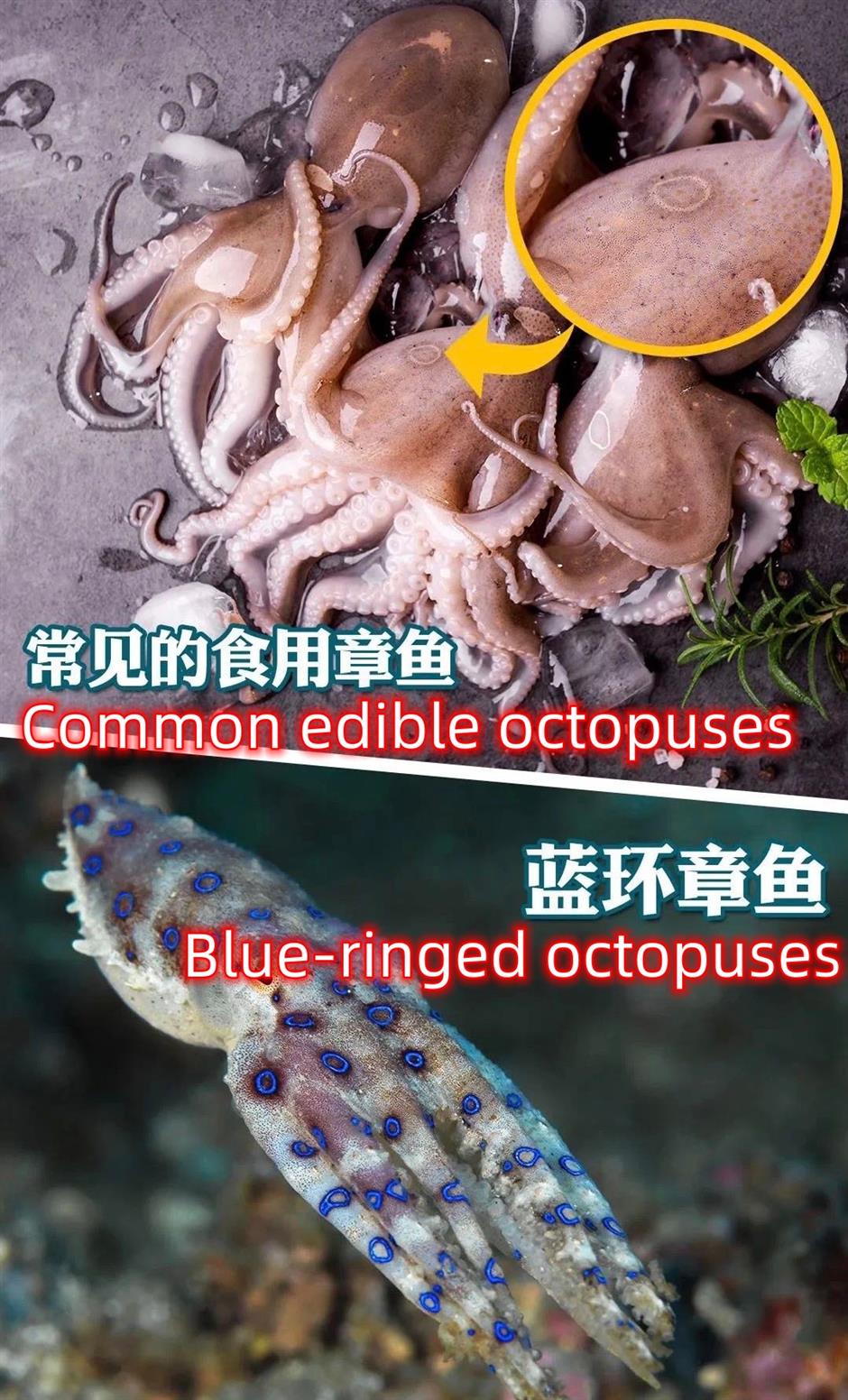 Tuesday's "blue-ringed octopus" controversy was started by a Weibo user who, while eating at a hotpot restaurant, discovered what appeared to be an octopus in a dish. A popular scientific blogger @博物杂志 identified the creature as a poisonous blue-ringed octopus.