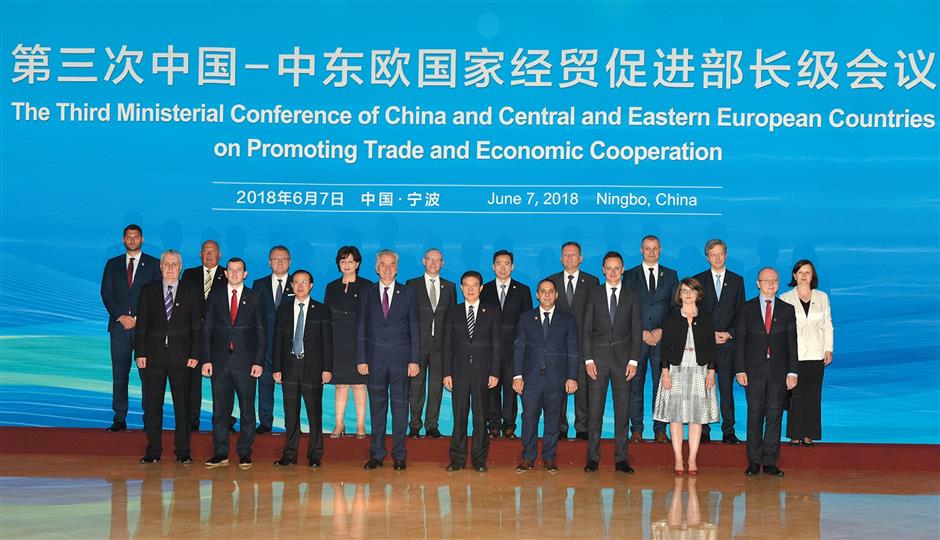 The Third Ministerial Conference of China and Central and Eastern European Countries on Promoting Trade and Economic Cooperation held this year announces the establishment of platforms in China to promote the cooperation with 16 CEEC in part of small and medium enterprises, e-commerce, customs coordination, digital economy and intelligent industry.

“We adopt the same standard as vineyards in France and Italy and are very confident about the quality of our products, and our annual sales were around 250,000 bottles for a while,” Peter said. “I was told that e-commerce is well developed in China and I’d like to find my partners here.”

During the expo, purchase deals or intent worth US$30 million were reached.

Ningbo has become the biggest distribution center of CEEC products throughout China and established more than 30 sub-centers around the country.

It also built stores for CEEC products at major online shopping sites, such as Taobao, T-mall as well as Kjb2c.com, the e-commerce platform of Ningbo Free Trade Zone, to help expand business in China.

“The expo this year for the first time cooperated with domestic major cross-border e-commerce platforms and supermarket chains,” said Zhang Yan, director of Ningbo Commission of Commerce. “We invited JD.com, NetEase and CR Vanguard, among others, to conduct on-the-spot procurement and expect more trade orders through this move.”

Assistant Minister of Commerce of China Ren Hongbin said that China-CEEC cooperation had already entered the maturity and harvest period.

The “16+1” cooperation is jointly established by China and 16 Central and Eastern European countries and a major part of the integration of Belt and Road Initiative into the Europe’s economic circle.

The China-CEEC expo this year also included investment project introduction, entrepreneurship, art and cultural exchange to boost economic and trade ties between the two sides, according to the Commerce Bureau of Jiangbei District, Ningbo.

Economic and trade cooperation is always an important part of China-CEEC cooperation.

The number of investment projects from Central and Eastern European countries has reached 177 since the beginning of the year, involving more than 10 billion euros (US$11.6 billion).

City mayors and some business representatives from Central and Eastern European countries attend the 4th China-CEEC Investment and Trade Expo in Ningbo.

The Czech light aircraft project was among the first launched in the Cixi-Zhejiang Sino-Czech (Ningbo) Industrial Cooperation Park early this year.

A complete set of cutting-edge technology and the entire production chain will be imported from the Czech Republic for the manufacturing of light aircraft. A total of 140 light aircrafts will be delivered in the next five years. The first Cessna Authorized Service Center in China will be established.

More than 1,000 companies in Cixi have businesses in Central and Eastern European countries.

The first phase of 12,000 square meters of bonded warehouses has been put into use. Construction on the second phase is expected to start by the end of this year.

The two-way investment between Ningbo and CEEC involves 125 projects in fields of medical care and pharmaceuticals, auto parts, photovoltaic, education and tourism.

The Hungarian National Trading House and the Investment and Development Agency of Latvia have established representative offices in Ningbo.

In the past four years, four vice premiers, 47 minister-level officials and more than 70 provincial governors or city mayors from CEEC have visited Ningbo.

Ningbo will also introduce more professionals from Central and Eastern Europe and send their own to the 16 countries after signing talent exchange agreements during the expo.