Kiln's porcelain paints a picture of the past 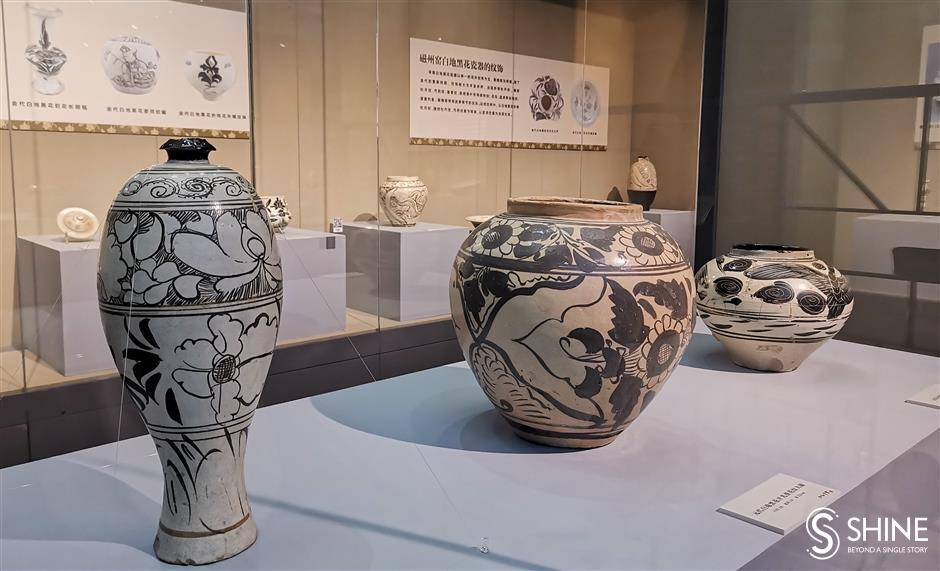 Cizhou porcelain in various shapes depicting different patterns are on display in Hangzhou Museum through March 31, 2021. One of the highlights, a meiping (left), which was designed to display branches of plum blossoms, but was later used to contain wine. It has a narrow base spreading gracefully into a wide body, followed by a sharp rounded shoulder, a short and narrow neck and a small opening.

Porcelain making was in its heyday in the Song Dynasty (960-1279), with a myriad of ceramic varieties and kilns springing up throughout the country. Cizhou Kiln in Handan, Hebei Province produced porcelain featuring white glaze and black patterns which was exported to the Middle East on a large scale.

Eighty pieces on loan from Cizhou Kiln Museum are on display at the Hangzhou Museum through March 31, 2021.

The origin of Cizhou porcelain could date back to the Southern and Northern Dynasties (AD 420-581) when craftspeople started to create ceramics with local fine clay. At the time, Cizhou porcelain was in multiple shades of white.

In the Tang Dynasty (AD 618-907), people ground a kind of iron ore into pigment and applied it on surfaces. The previous monochromatic designs gradually developed with fixed black-and-white patterns which finally evolved into the epitome of Cizhou Kiln products.

Craftspeople drew experience from gold handicrafts, applying gilding and carving techniques in creating porcelain. They used tools to engrave patterns on the surface instead of using brush pens. These innovative products soon gained popularity across the north part of China and were then exported overseas.

Sunken ships have been found miles off the coast of China since the 1980s. These ships had been heading for the Middle East but sank shortly after departure. They carried large loads of porcelain.

It was not until 2007 that archeologists began the salvage work on these ships. A number of Cizhou Kiln products have been recovered.

A jar on display is painted with a chubby toddler holding a lotus leaf. Scenes of infants and toddlers playing games are common in Cizhou porcelain.

Cizhou Kiln produced many types of vessels for daily use. The teapots, wine containers and vases on display reflect the lifestyle of people in the Song Dynasty. 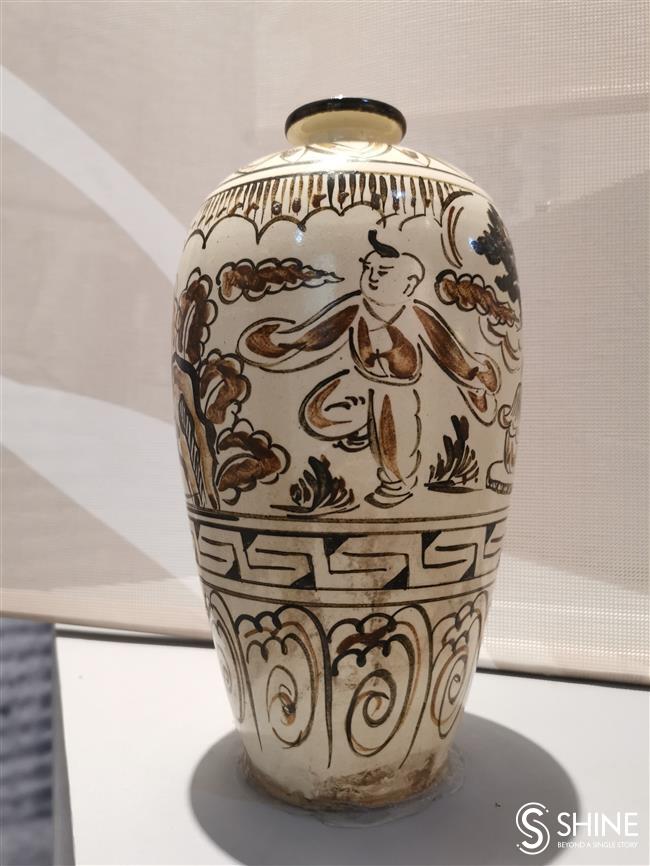 A porcelain features a toddler wandering around. Scenes of infants and toddlers playing games are common in Cizhou porcelain.

A meiping, which was used to display branches of plum blossoms, on show ornamented with gardenia patterns could typify ancient people’s integration of aesthetics and practicability.

The meiping is tall, with a narrow base spreading gracefully into a wide body, followed by a sharply rounded shoulder, a short and narrow neck and a small opening. It was traditionally used to hold plum branches, but later used to contain wine.

During the Song Dynasty, ceramic pillows also reached a new height of craftsmanship as artisans incorporated shapes and patterns into their designs, a development which coincided with breakthroughs in artistic fields such as painting and calligraphy.

For many people in ancient China, getting a good night’s rest meant snuggling up with a Cizhou Kiln ceramic pillow. The exhibition displays some that are considered the top-flight of ancient pillows.

One displayed pillow is monochromatic, reflecting a preference among people for simply adorned porcelain goods. Without complicated patterns or color schemes to mask flaws, this lightly decorated pillow is an example of fine craftsmanship.

As the Song Dynasty also gave rise to a renaissance in the calligraphic arts, pillows of the time frequently bore poems or auspicious characters written in a variety of artistically rendered scripts.

During this dynasty, ceramic pillows took on a new cultural significance. They were given as dowry items. In a bid to pray for more offspring, some pillows are decorated with infants and toddlers.

It was also believed that pillows bearing the images of immortal figures or mythical creatures had the power to ward off evil. Figure drawings on pillows were also common at the time, with many of these images reflecting contemporary aspirations and aesthetic tastes. 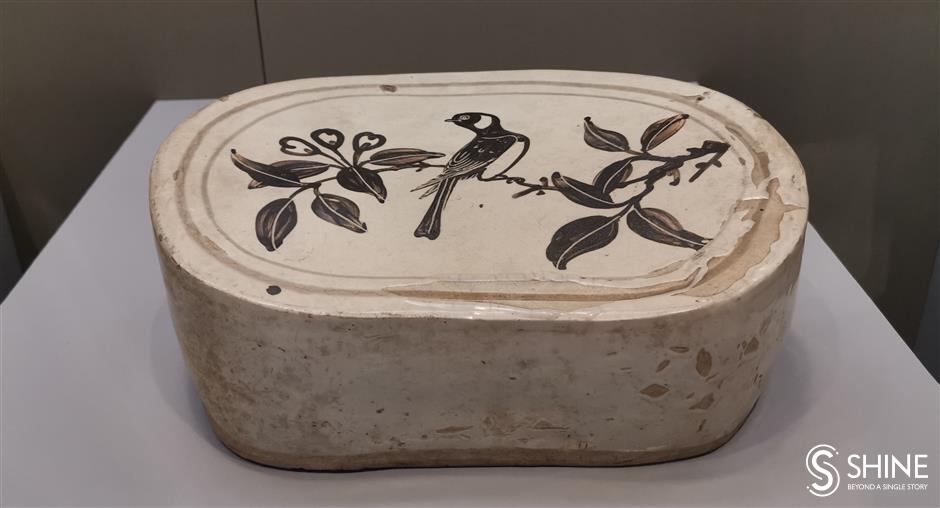 A ceramic pillow with a pattern depicting a bird standing on a branch is on display.