An ancient Chinese artwork once used to regulate troop movement 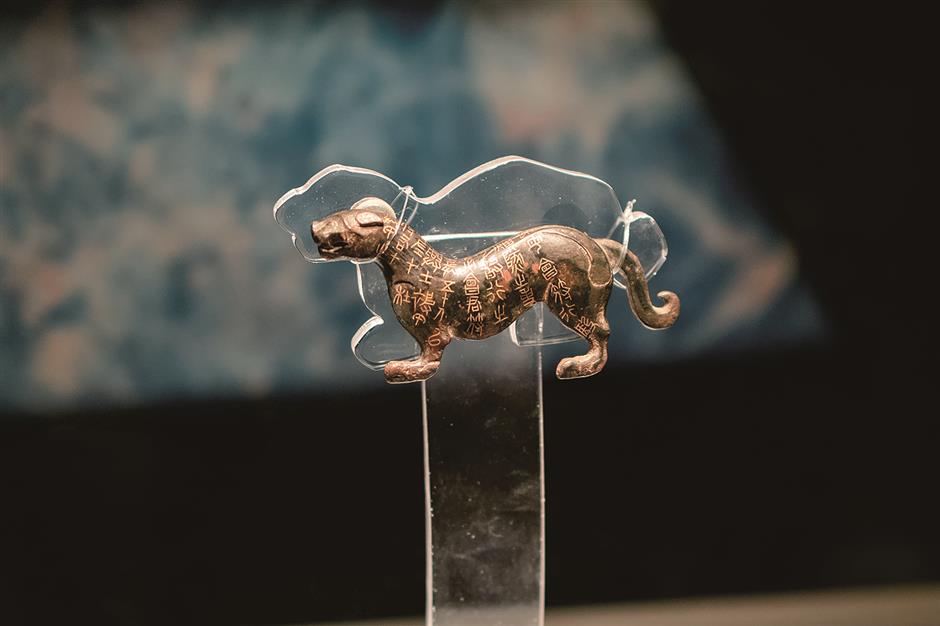 The tiger-shaped tallies, called hufu in Chinese, can be traced back to the Spring and Autumn Period (770-476 BC).

In Chinese, the word fuhe means "in accordance with," but many people, even Chinese, don't know it was split into two words more than 2,000 years ago.

The noun fu represents the tally used to regulate the movement of Chinese troops. Meanwhile, the verb he means "placing together."

Issued to military commanders as documents of imperial authorization, tallies in ancient China were often shaped like tigers – a fierce and powerful animal that represent the masculine principle in nature, and believed to be the king of all animals in Chinese civilization.

The tiger-shaped tallies, called hufu in Chinese, can be traced back to the Spring and Autumn Period (770-476 BC).

The hollow, tiger-shaped tallies could be divided into halves.

The right half was kept by the central government, and the left half was issued to governors of prefectures and military leaders. Tallies were often carved with characters, which were further inlaid with gold on the backs of the tigers.

The earliest-discovered bronze hufu is in the Shaanxi History Museum's collection.

Made in late Warring States Period, the tiger-shaped tally is known as du hufu. Du, which stands for Duxian, was a county located in today's Xi'an in Shaanxi Province.

The cultural relic was discovered by a farmer named Yang Dongfeng while he was leveling soil in a Xi'an suburb in the winter of 1975.

He had intended to sell the rusty metal as waste, but finally dropped the idea as it was too light and couldn't sell for much. He sent it as a toy to his sister instead. Yang didn't realize the significance of the artifact until the gold inlaid characters appeared after the rust was rubbed off a few years later.

He then brought the artifact to the Shaanxi History Museum and happened to encounter archeologist and historian Dai Yingxin.

After some inspection, Dai judged that it was probably a rare hufu from the Warring States Period. To thank him for his donation, the museum sent him a commendatory letter and a 7 yuan (US$1.08) bonus.

Measuring 4.4 x 9.5 x 0.7 centimeters, the bronze du hufu weighs 80 grams. It is cast into a walking tiger with its mouth open, ears facing backward and tail curling up. It features 40 characters on nine lines, mostly written in xiaozhuan, or small seal script, a calligraphy in which all lines are of even thickness, with predominant curves and circles.

The text indicates the right half of the rally is held in the hand of the emperor, while the left half is issued to the governor of Duxian County. When these two parts are combined into one piece, the military order of dispatching more than 50 soldiers takes effect. Additionally, if soldiers set smoke and light fire on the beacon tower, the tiger tally is not necessary.

The tally played a significant role in ancient wars. The "Historical Records" by Sima Qian documents a story that the state of Qin besieged Handan, the capital of the state of Zhao, in 257BC, and Zhao requested aid from the neighboring state of Wei.

The King of Wei asked the senior general Jin Bi to lead 100,000 soldiers to save Zhao. However, Jin was afraid of Qin's power and halted the offensive. Lord Xinling, son of the King of Wei, was determined to save Zhao and requested that Lady Ru, the king's concubine, steal the tiger-shaped tally from the king's bedroom. She succeeded. Seeing the tally, the soldiers obeyed orders and finally rescued Zhao.

The shape of tallies changed over time. In the Sui Dynasty (AD 581-618), the tiger shape was replaced by a qilin, a mythical hooved chimerical creature that appears in Chinese mythology.