The mystery and majesty of a multi-cultural Buddhist monastery 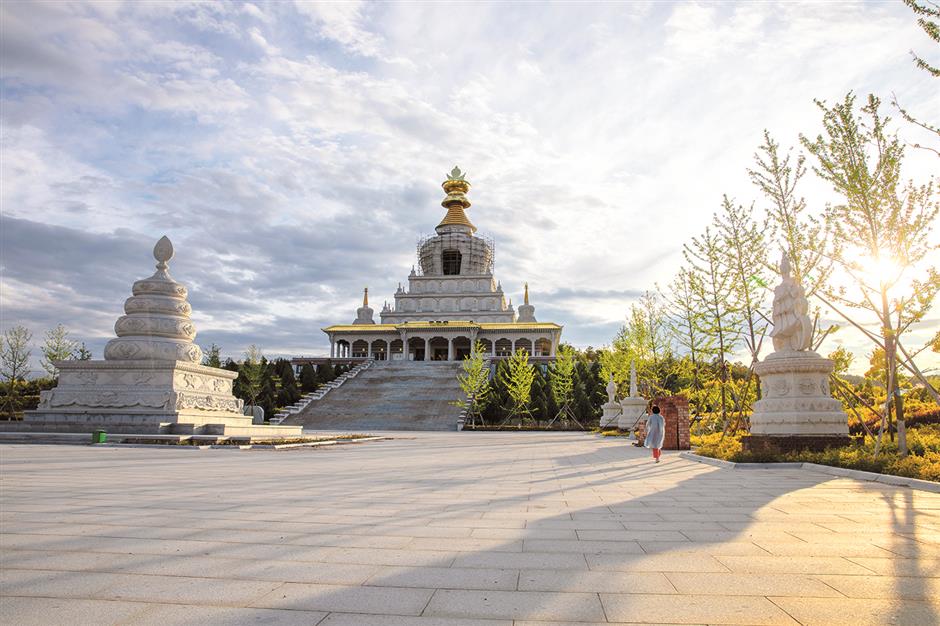 The Buddhist monastery Ruiying Temple, located in Mongol Autonomous County in Fuxin, a city in the northeastern Liaoning Province, is a religious shrine that embodies the cultures of Han, Manchu, Mongol and Tibet.

The Buddhist monastery Ruiying Temple, located in Mongol Autonomous County in Fuxin, a city in the northeastern Liaoning Province, is a religious shrine that embodies the cultures of Han, Manchu, Mongol and Tibet.

Built in 1669, the temple runs from south to north, with the center part as its major construction. It follows the structure of Potala Palace to some extent, but makes a greater variation that combines the architectural styles of different ethnic groups.

The Great Hall is surrounded by four halls that sit on four different hills linked by a 6,000-meter-long road, with hundreds of stone-carved Buddha sculptures on each side.

An old one-liner said, "Ruiying had 3,600 famous monks, and the nameless are a dime a dozen."

The Hall of Living Buddha is made up of two structures in the east and west, with a total of 999 rooms and seven doors. Each room and window is posted with green and red auspicious patterns. The quiet and spacious courtyards, and neat, well-organized streets give the entire area an aura of serenity and sacredness.

Each generation of the living Buddha was highly respected by the emperors, and every year they traveled to the capital to recite sutra and hold worship ceremonies for the royal family. The temple's name board was a personal inscription in the Han, Manchu, Mongol and Tibetan languages by Emperor Kangxi (1654-1722), who visited in 1669, the year the temple broke ground.

The anecdote said the emperor in plain clothes paid a visit to northeast China in today's Liaoning Province, from where his ancestor overthrew the Ming Dynasty (1368-1644) and later established the Qing Dynasty (1644-1911).

He walked in the woods and bumped into a tiger lying in front of a stone cave. Scared, the emperor was ready to fight. A smiley middle-aged Lama monk stepped out of the cave and waved to the distinguished guest, "Your majesty, please come inside and have a cup of fragrant tea!"

They had a pleasant talk about religion, politics and culture. "Why practice Buddhism in a shabby cave?" Emperor Kangxi asked. "It's impossible to build a temple by myself," replied the monk, living Buddha Sangdansangbu. When Emperor Kangxi was about to leave, he ordered the King of Northeast Zhuoliketu to help the monk set up a new temple.

The story might not be true, but it somehow implies the temple's connection with the royal court. In fact, the living Buddha worked as a conciliator to mediate between the central government and the rebellious forces of King Da'erhan in 1699, helping to pacify the rebels.

The temple had a very strict administration structure with the top leader, the living Buddha and all levels of managers and secretaries for halls, libraries and conferences.

It also had its own honor guard. Each time the monks held a parade around the temple, local Mongols gathered from all directions to celebrate, as did businessmen, who came to trade. This not only promoted the economy but also facilitated the local life.

In 1823, temple officials wrote a memorial to the emperor to ask for more land, as it had more than 3,000 monks and was supporting 800 families. The central government approved and confirmed its "integration of politics and religion" management system, thus making Ruiying Temple a Buddhist cultural center in the eastern Mongol area known as "Eastern Tibet" among the people.

Today, it is a popular tourist destination, where visitors can enjoy not only exotic architecture, but also many beautiful Mongol paintings, medication books and an ancient astronomical calendar system.