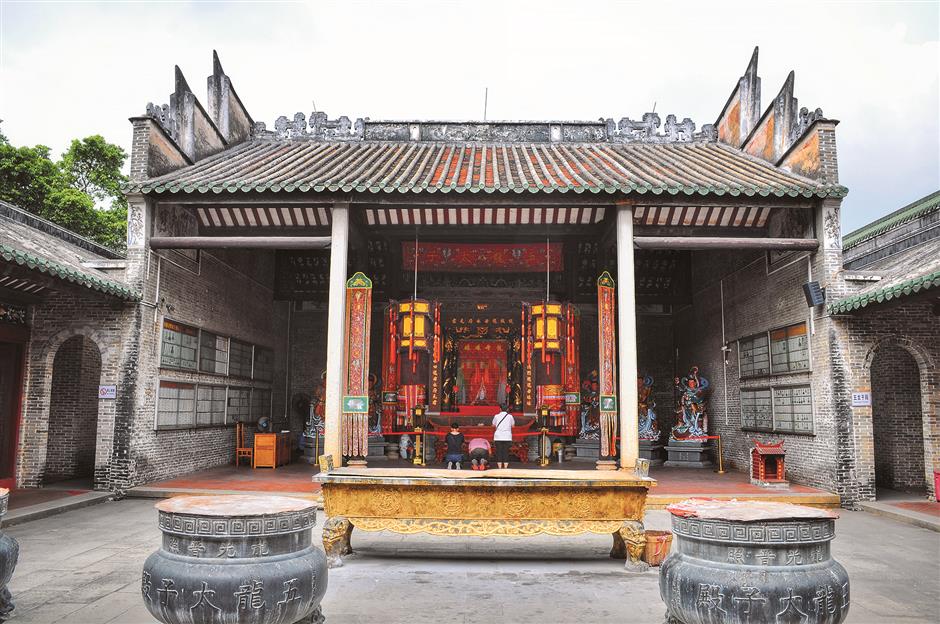 Nestled in the gentle arms of the Xijiang River and leaning against Wulong (Five Dragons) Mountain, the Temple of Dragon's Mother in Zhaoqing, Guangdong Province, is a spiritual home for her disciples across the Pearl River Delta.

In Chinese culture, the dragon is the god of water that tames rainfall and harnesses every sea, river, canal, lake, pond and creek. It's been a centuries-old tradition that people, especially those living near water, pray to the dragon for safe voyages, propitious rain or bumper sea harvests.

The mother of the dragon has been respected as an ancient heroine who made contributions to the nation, and a goddess of mercy who was kind to the people.

There are countless dragon mother temples in the country, but the one in the city of Zhaoqing, Guangdong Province, has the longest story to tell.

Nestled in the gentle arms of the Xijiang River and leaning against Wulong (Five Dragons) Mountain, the temple is a spiritual home for her disciples across the Pearl River Delta, including Hong Kong and Macau.

On the mother's birthday, the eighth day of the fifth month on the lunar calender, more than 100,000 pious followers gather in the temple to celebrate, worship and give thanks to this goddess.

The Temple of Dragon's Mother dates back around 2,000 years. The legend goes that a lady surnamed Wen found five stone eggs on a riverbank.

She picked them up, brought them home and incubated them gingerly. The eggs hatched into five small lizards, and grew bigger day by day until they became five giant dragons.

Wen tamed and taught them to bring benefits to the people with their talent for dominating water.

She led her dragon children to fight floods and save fishermen from monstrous sea billows.

When the mother ascended to heaven and became an immortal, local people set up the temple to remember her and thank her for her good deeds.

The temple as it stands today is the result of hundreds of years of renovations and expansion that stands as one of the finest examples of traditional Guangdong architecture, focusing heavily on complicated carvings and sculptures.

The four stone columns in the Incense Pavilion are carved with curled-up dragons by fretwork in different knife techniques, so delicate that the stone bead can roll freely in each dragon mouth.

The most recent memorial archway was set up in 1907, 10 meters high, made entirely of granite. Its carvings feature a distinctly Western style, but the themes center on ancient Chinese mythology.

The front gate is covered with green, glazed tiles on the roof, while the main ridge is decorated with vivid pottery sculptures of double dragons playing with beads in the middle, and other figures, flora and fauna on the sides.

The dragon mother's tomb lies silently near the main hall. It is said the mother died in 210 BC, and her five dragon sons, saddened, hovered in the middle air to sweep sand and stones that formed a grave mound.

According to the temple's archives, the tomb's parapet wall was built in 1756, ordered by a government official named Tong.

The tomb's stele inscription is the original one created in 1782 while the temple underwent renovations.

In 1905, a seven-year facelift restoration commenced that gathered the most skilled craftsmen in Guangdong and Guangxi. The most clever design was its high platform with an all-granite floor that resisted floods. Each time after a flood when the streets were congested with knee-deep sludge, the temple was easily swept clean.

Over the past century, the temple has survived numerous floods and storms without a wall crack, floor collapse, worm damage or thunder shock.

The "dragon mother culture" in the Pearl River Delta is a maternal worship of truthfulness and kindness, which nourished the land and cultivated its people for hundreds of years.

On the mother's birthday, followers keep to the ancient ritual. First, they wash their hands in the Dragon Spring to clean off the worldly dirt, and then burn incense, present gifts, bow, kneel down and pray hard. In the end, people set off firecrackers to respectfully invite the mother to receive their gifts and fulfill their wishes.