Parents and children found much shorter queues at the 5th China Shanghai International Children’s Book Fair last weekend. The fair went ahead as scheduled, only four days after the city’s health authority reported the first local case of novel coronavirus in more than half a year.

The stricter-than-usual pandemic control measures, this year’s new titles explaining the virus to children, and the various programs discussing its impact on the industry reminded local visitors of the testing year. Many of them thought their lives were back to normal, but publishers attending the fair believe that the adapted pandemic control measures may well stay and change the children’s book publishing industry forever. 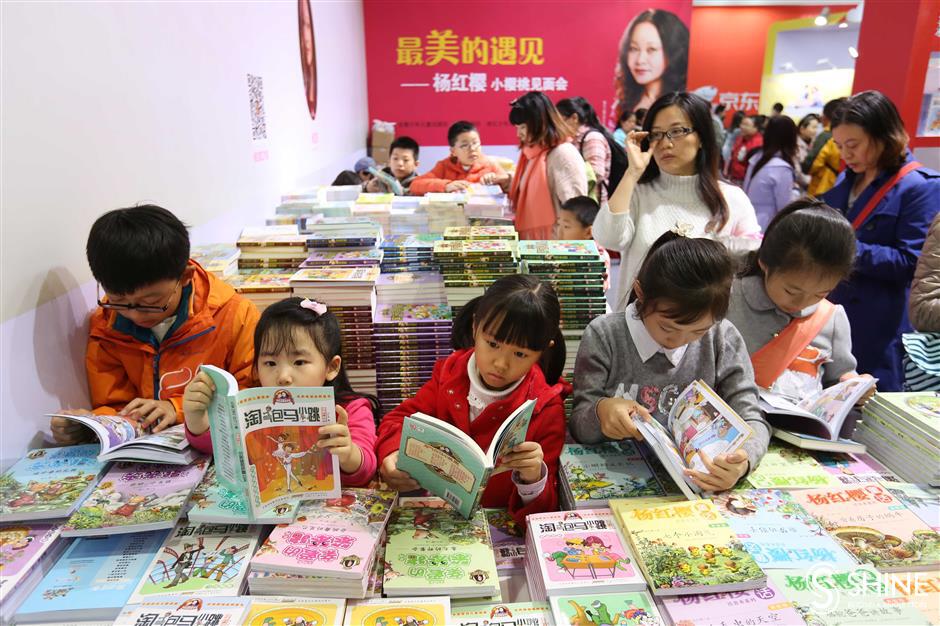 “When I heard about the new local case, I did hesitate and thought about not coming, but my son had been looking forward to this for a long time since many kids’ events earlier this year were cancelled,” Chloe Shen, a 33-year-old mother, told Shanghai Daily as her five-year-old son enjoyed a story-reading session from his favorite illustrator.

“To be honest, I haven’t worn masks recently. Even though there are news about imported cases every now and then, it doesn’t really affect us. I feel quite safe in the city. But this one is local, even though it is just one case. My husband dug out the masks from storage and alerted me about social distancing at the fair a few times every day.”

Exhibitors and visitors were required to pre-register, provide a health code, and have their temperature taken a few times before entrance. The organizer tried to infuse online events with the fair that was originally designed for offline activities.

Over 60,000 recent titles were on show, among which one-third were from overseas. Foreign publishers and children’s content players, accounting for more than 30 percent of the 350 exhibitors, couldn’t travel in person and participated with publications and online panels.

“Many of our authors used to rely on promoting their books in schools. But schools were closed. It is also a big challenge for a small independent publisher like us. We focus mostly on illustrations, which depend a lot on how kids touch and feel the books, a reflection of their emotions.”

Based in the populated Victoria State, she added that there were a few different lockdown levels, and the publishing industry there had only just started to recover. Many publishers, including hers, adjusted to a yearly plan and explored online measures to connect with readers. Publishing plans were largely delayed until September, making it an extremely competitive month in Australia’s publishing industry.

Her Chinese peers experienced all of it earlier, and explored the vast channels and tools in China’s Internet business to find the best combination to boost sales both online and in physical bookstores.

“The real impact on the industry may turn up next year, or even the year after,” said Yan Xiaoli, editor-in-chief of Dandelion Children’s Book House, one of the fastest-growing in China’s children’s book market.

“For example, we may choose different types of topics to publish, because parents want something more pragmatic for their children, like popular science books about the virus, or medical or disaster books in general. The market might be more segmented, with new niche markets for in-depth titles on some topics.”

She added that children’s publishers also need to be prepared for more diverse demands, and requests for better services.

“On the surface, this year’s online exploration revealed that books would become text plus picture, audio, interactivity and even artificial intelligence in the future. I believe we would also enter a post-service era, meaning how to provide better, more detailed and more effective services in a variety and innovative ways for readers. That is what we as publishers need to understand and think about now.” With strict pandemic control measures, the children’s book fair went ahead as scheduled in the city last weekend.

Most Chinese children’s book publishers used to rely on distribution or sales partners for online channels. This year, many founded their own online department that includes both professionals of sales and editorial to find better ways to reach potential readers at the very beginning, sometimes before books were published. They also ventured into new online channels such as livestreaming or community e-commerce platforms.

Zhang Mingzhou, president of the International Board on Books for Young People, took a different approach by launching a website to provide free pandemic-related children’s content in different languages, hoping to share the knowledge and connect children around the world.

“When the pandemic first broke out in China, children couldn’t go to school and were stuck at home. Many were afraid. Others wanted to rush out of the door to play with their pals. Parents felt helpless,” he said.

“I was very anxious about what I could do as a children’s publisher. I discussed it with my colleagues in 81 IBBF branches around the world, and surprisingly discovered that most of them were not alerted at all, even when it was starting to break out in their countries.”

One digitally-printed book inspired Zhang, Changjiang Children’s Press, headquartered in the original epicenter Wuhan, to put together “A Brief History of Viruses for Children (Illustrated)” in seven days. It also became one of the 11 titles on Life Tree Books, the translation and reading program Zhang initiated in early February.

He called for Chinese publishers to donate the skills and time or their copyrighters and translators. The feedback went beyond his expectation.

Publishers around the country submitted their books related to COVID-19 and 10 titles were selected. More than 300 translators, including many well-established ones like Harry Potter’s Chinese translator Ma Ainong, volunteered to turn the titles into 11 languages.

It was followed by international publishers and volunteers, leading to one Iranian title and six more translation languages added to the website — www.lifetreebooks.org.cn.

“We hope that the pandemic will gradually get under control around the world, and after that, we will extend Life Tree Books into a multi-language free children’s contents of the best quality,” Zhang said.

“We will select and translate the best children’s books from around the world, hoping to promote more dialogue and better exchanges among kids.”