With the end of the scorching summer, the colorful autumn with its pleasant weather as well as seasonal food will enrich life in Qingpu District.

It is a good time to sample lotus roots which absorb nourishment for lotus flowers during the summer and become plump in September.

After liqiu, or the start of autumn in the Chinese lunar calendar, it is the "digging season" for lotus roots. The white lotus root is embedded in mud, like a sleeping baby hiding there quietly.

It is tiring and hard work to dig out lotus roots. The lotus digger steps into water wearing waterproof pants. They carefully peel away the layers of lotus leaves, crouch low, then carefully search for the "sleeping" position of the "root baby."

To ensure the lotus root is unbroken, diggers must pay special attention. If you pull hard, it is very easy to break it. So, the lotus root diggers use water guns to flush away mud on the lotus root stalks and then gently pull them out.

Then, they use plastic sheeting to transport the lotus roots to the shore. After cooking, those lotus roots become delicious dishes for the table. 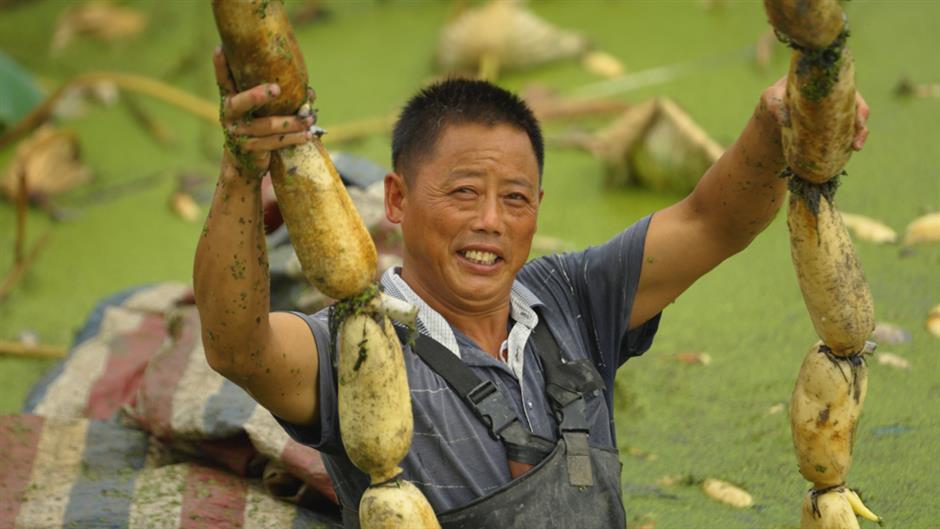 In addition to the sweet lotus roots, autumn is also a good time to enjoy the moon and taste mooncakes.

Taking Qingpu's rice culture as the starting point, Mile Farm in Liantang Town has innovatively launched a distinctive "mooncake" which is based on the traditional Liantang steamed cakes, injecting Qingpu intangible cultural elements.

On visiting Mile Farm, Yang Qinfeng, who is in charge of the farm, was washing rice, grinding rice flour and filling molds.

Unlike other mooncakes that use wheat flour and other raw materials, the steamed cakes use high-quality Qingpu local rice and glutinous rice, and the processing method is not baking, but steaming.

A small steamed mooncake inherits the old craftsmanship of Qingpu's intangible culture, and it also "steams" out the best wishes for the Mid-Autumn Festival.

Compared with traditional mooncakes, the taste of steamed mooncakes is soft, refreshing and non-greasy.

The fillings are various, such as jujube paste, bean paste, cocoa and matcha, making for a rich taste.

In order to make these mooncakes more attractive, Yang also adds butterfly pea pollen to the rice flour to give the mooncakes an elegant blue color, which shows originality.

"We want to put some elements of Chinese fairy tales of the Mid-Autumn Festival into the mooncakes through auspicious patterns, such as baxiansongzi (八仙送子), sending children by eight immortals, huahaoyueyuan (花好月圆), blooming flowers and the full moon and yutudaoyao (玉兔捣药), jade rabbit grinding medicine, to reflect the Chinese traditional culture of the Mid-Autumn Festival," Yang said.