All the ways we kept in touch

The booths that once connected us may be passing into history, but they won’t be forgotten. They have a new home in the Shanghai Telecom Museum near the Bund, which chronicles communications from wire to wireless, telegraph to telegram, faxes to smartphones.

The stone-and-wood museum, built in 1921, once housed the Danish Great Northern Telegraph Co. The grand lobby has been renovated to revive the original busy work scene of almost a century ago, with marble floors, wooden fireplace and mosaic walls.

A bronze statue of Edouard Suenson, the company’s first general manager, stands in the museum.

Great Northern came to Shanghai in 1881, renting a building on the Bund and setting up the city’s first telephone switchboard there a year later. The company later moved its location to the present museum site.

A bronze statue of Edouard Suenson, the company’s first general manager, stands in the museum. The Dane is credited with bringing the first telegraph to China. The statue was shipped back to Denmark in 1961, but in 2011, the Danish company donated it back to celebrate the museum’s opening. It was placed in its original spot.

It’s no exaggeration to say that Shanghai’s modern telecommunications emanated from this building.

Take the old-fashioned elevator, with its iron-grid door and wooden interior, to the exhibition halls on the third and fourth floors and see the evolution unfold.

Old photos in the exhibition show the company’s workshop at the Shanghai Telegraph Station, land-based cables being laid between downtown Shanghai and Wusong Port in 1901, and cable ships anchored on the Huangpu River in 1915.

An old map of submarine cables that once hung in Suenson office is also on display. 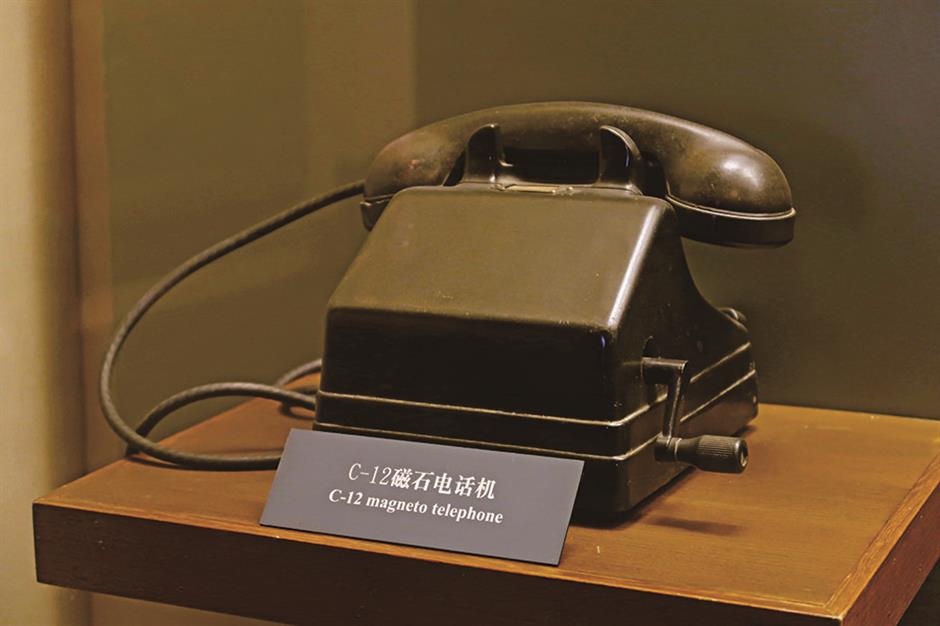 In 1877, the Chinese started to set up their own telegraph system. The first self-run private telegraph ran from a high-ranking official’s office to the Jiangnan Machine Manufacturing Bureau (later Jiangnan Shipyard).

The museum showcases a replica of the stone signboard of the Shanghai Telegraph Bureau. The original one was found in 1989. Local residents had been using it as a washing table for decades.

The BD55 tele-typewriter, the first domestically made machine, was developed in Shanghai in 1956. It ended the era when China had to import such equipment from overseas. 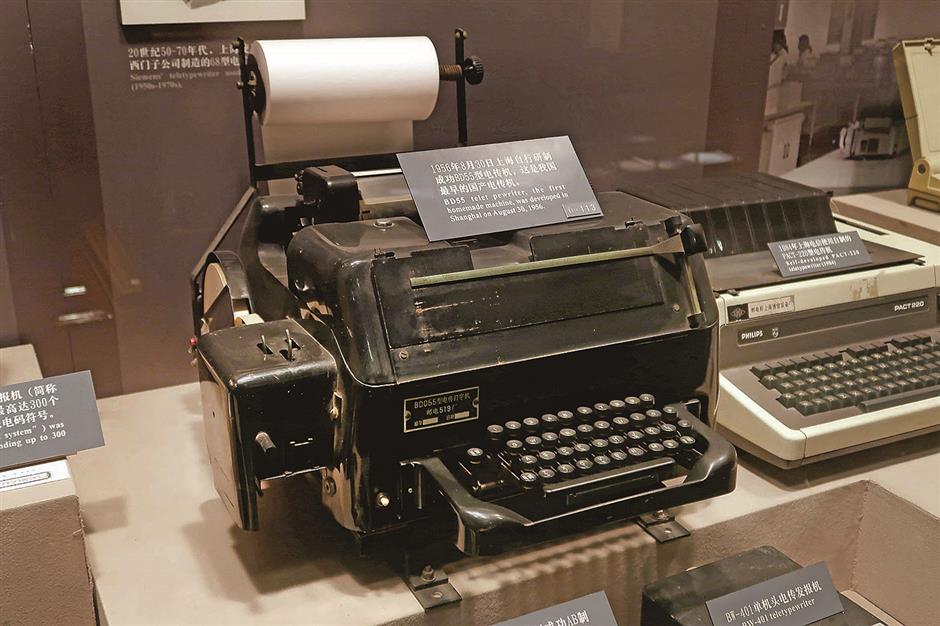 The BD55 tele-typewriter, the first of its kind in China

The automatic Shanghai-built telegraph transmitter won first prize at the National Major Achievements of Technical Innovation in Telecommunication in 1964.

The city opened a new chapter in telecommunications with the founding of the Shanghai Telephone Bureau in 1907, providing local service for Chinese.

At the same time, foreigners developed their own telephone service in the concession areas. The museum has a bronze board marking the groundbreaking ceremony for the Jiangxi Road central telephone exchange for British businessmen in 1908. The exchange today has become a local telephone bureau.

Perhaps the biggest treasure in the museum is a rotary device used for directory service by the US-funded Shanghai Telephone Co in the 1930s.

It was cleverly designed in a big wooden rotating cylinder, flanked by hundreds of small bamboo pegs where the catalogued numbers of firms, factories, schools, hospitals and shops were written in both Chinese and English. 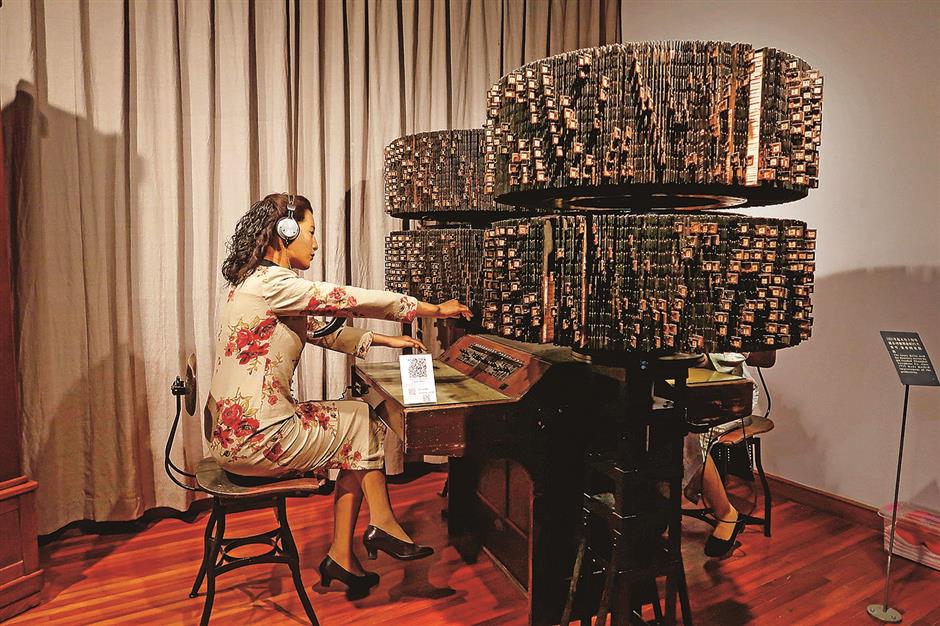 Two wax operator ladies, a Chinese and an American, sit at the two sides of the device. With just one easy rotation, they could find a phone number within 20 seconds.

The device was used in Shanghai from 1931 to 1989, before it was replaced by a computerized system.

A public telephone station has been replicated in the museum, taking visitors back to the 1980s, when a whole neighborhood might share only one or two telephones. An operator in the neighborhood would yell across the area to alert someone to an incoming call. If the person was not at home, the operator would jot down a message. There was little privacy in phone calls.

As of the end of 1989, Shanghai had more than 8,000 public telephones, ranking it first among cities on China’s mainland. People used coins or prepaid cards to make calls. The museum has collected various rechargeable cards issued in different times. 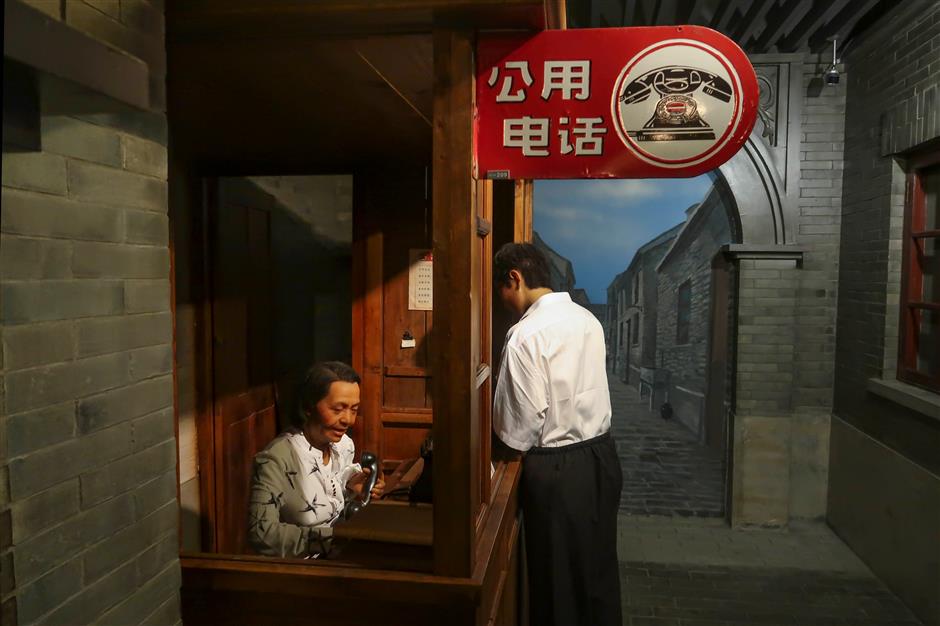 A public telephone station has been replicated in the museum.

By the early 1990s, private household phones were becoming commonplace. From magneto to central batteries, from hand cranks to push buttons, the exhibits trace how phones became more modern.

One of the highlight exhibits is Shanghai’s last magneto telephone from the early 1900s, found on Chongming Island.

Mobile phone technology first appeared in the 1990s. The first phones were large and clumsy.

The museum exhibits dozens of old-fashioned mobile phones of various brands and designs, including the Motorola 8500, the earliest arrival to Shanghai. It weighed 776 grams and was nicknamed the “boss’s phone” because only rich businessmen could afford one. The exhibits also include old beeper pagers that were popular with ordinary people. 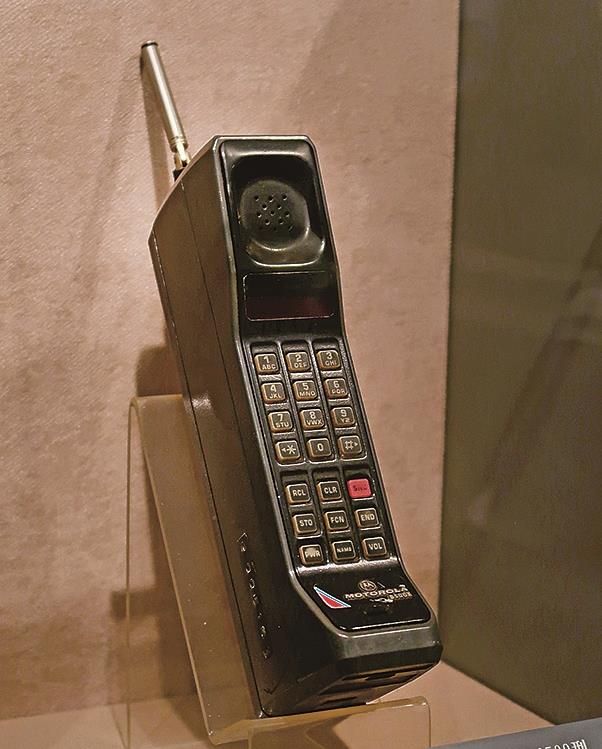 The Motorola 8500 mobile phone that appeared in Shanghai in the 1980s was dubbed the "boss's phone." 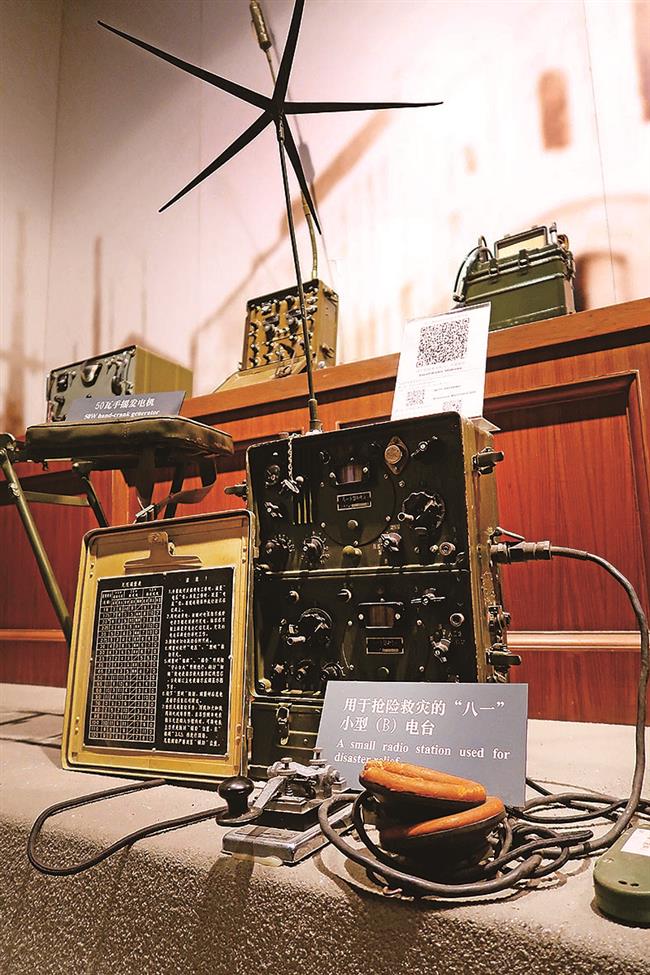