The operation lasted just two hours, there was no bleeding and the patient was able to walk by herself on the third day.

Lung transplants are difficult, risky and usually involve opening up the chest. How to lessen the trauma and enable a quicker recovery has been the aim of medical staff for years.

The 59-year-old female patient surnamed Liu had serious pulmonary fibrosis and difficulty breathing when she arrived at the hospital.

Doctors conducted comprehensive therapy while waiting for a donated organ. There is a 30 percent of death during the wait for a lung, they said.

A matching lung was found through the national organ donation network in two weeks.

Surgery was conducted immediately, but during the procedure doctors found the donated lung too big for the patient.

Compared with a single lung transplant, a lobe transplant is much more delicate and difficult but doctors were able to transplant the healthy upper left lobe and the new lung started working at once.

It was the second such lung transplant surgery using ERAS. The first patient, who had chronic obstructive pulmonary disease and coronary disease, had a right lung transplant earlier this year. Surgery lasted two hours and his tubes were removed the next day.

The hospital is the first one carrying out lung transplants in east China. So far, it has conducted nearly 100 lung transplants, with patients ranging from 18 to 71 years old. The longest survival record is 14 years.

Doctors said the hospital is focusing on individual treatment for each patient to reduce trauma and enhance recovery and quality of life. 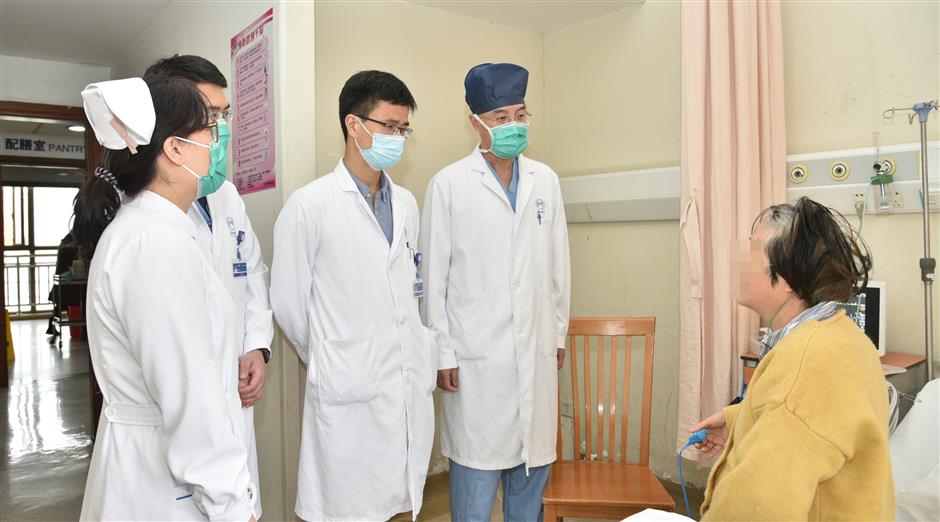 Doctors from Shanghai Chest Hospital check the patient, who recovers very well, after a lung transplant over the weekend.