Worker's community to have brand-new look 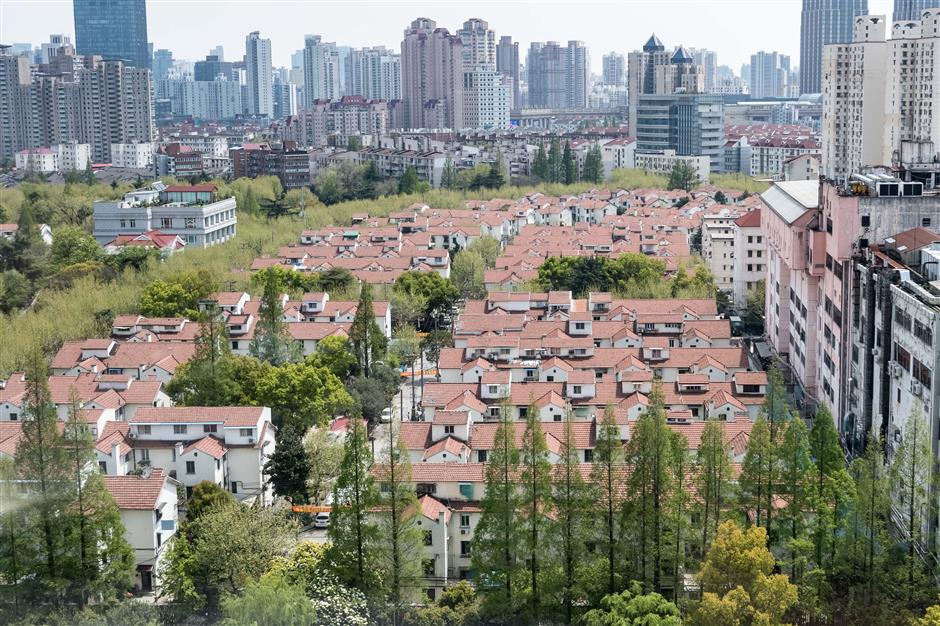 A bird's-eye view of the Caoyang No. 1 Community ahead of the renovation project

China’s first worker’s community, once a symbol of pride and a dream for local people as well as a popular reception site for foreign leaders, is being refurbished with its history preserved and modern facilities added.

Over 1,500 households, including many former model workers and their descendants, have been temporarily relocated. By the end of the year, they will move back to their brand-new apartments with modern facilities.

The Caoyang Community, covering some 2 square kilometers, sprung up in September 1951 as a home for model workers, a forerunner to other workers’ communities built nationwide to accommodate a growing workforce during a period of rapid industrialization.

As the first “new community” in Shanghai that opened up to the outside world, it has received more than 300,000 people from over 150 countries and regions. High-ranking visitors include former US President Richard Nixon and other national leaders.

The Caoyang community subdistrict has established a foreign affairs office to be in charge of receiving foreign guests. A community museum has also been established to showcase the history of the community. 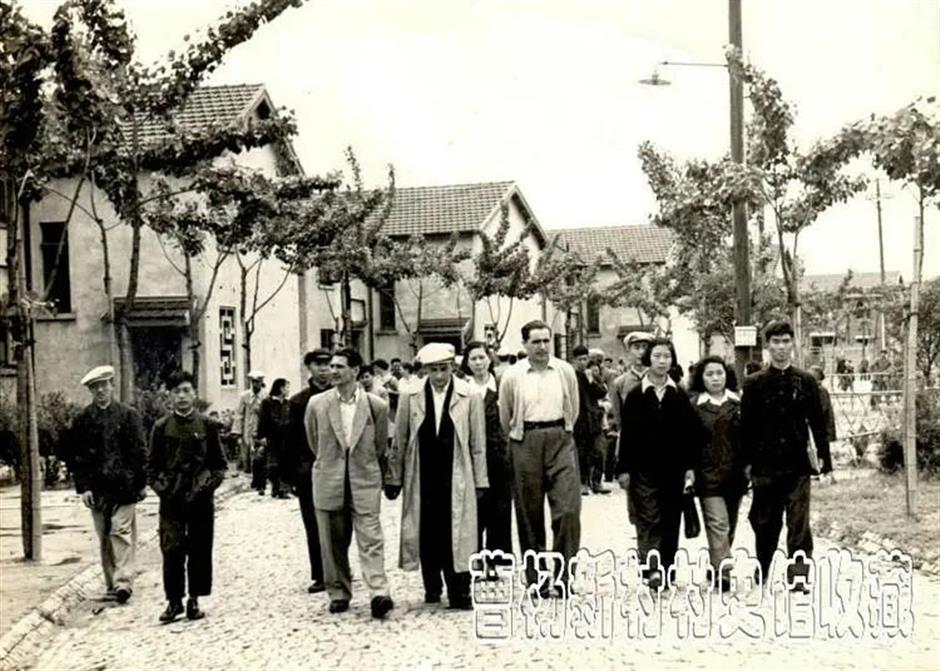 In this archive photo, foreign guests visit the Caoyang community after it was completed in the 1950s.

The planning, design and construction of the neighborhood represented the most advanced concept of modern communities. The houses with red roofs and white walls were covered by trees and flowers. A 15-minute service circle has been developed, with public service centers, schools, medical clinics, banks and wet markets spread around.

“We were among the few local communities that had gas and tap water at that time,” Pan recalled. “My mother said she would smile even in sleep after moving into the house.”

Walls have cracked while the wooden floors creak and are plagued by termites. The stairways are crammed with the inhabitants’ commodities. The shared kitchens have become oily and dirty while residents have difficulty in enjoying a warm bath in winter. 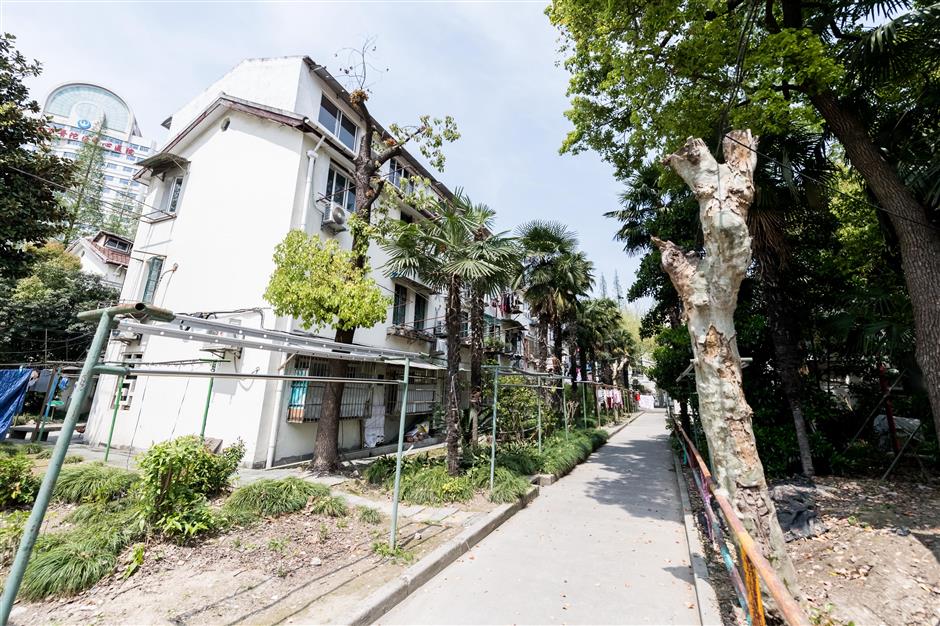 The Caoyang No. 1 Community before the renovation

“Without revitalization, the profound history of the historical community might be forgotten along with its aging population and facilities,” a designer for the renovation project said.

Shanghai built 18 “workers’ communities” in the 1950s but many are in poor condition now.

The renovation project at Caoyang aims to become a pilot for other local workers’ communities, according to the subdistrict.

The additional third floors will be rebuilt to be in harmony with the original features of the buildings. The appearance of the structures will be preserved as its old residents remember them. Some textile elements will be involved in the exterior decoration to showcase the “worker’s culture” of the community. 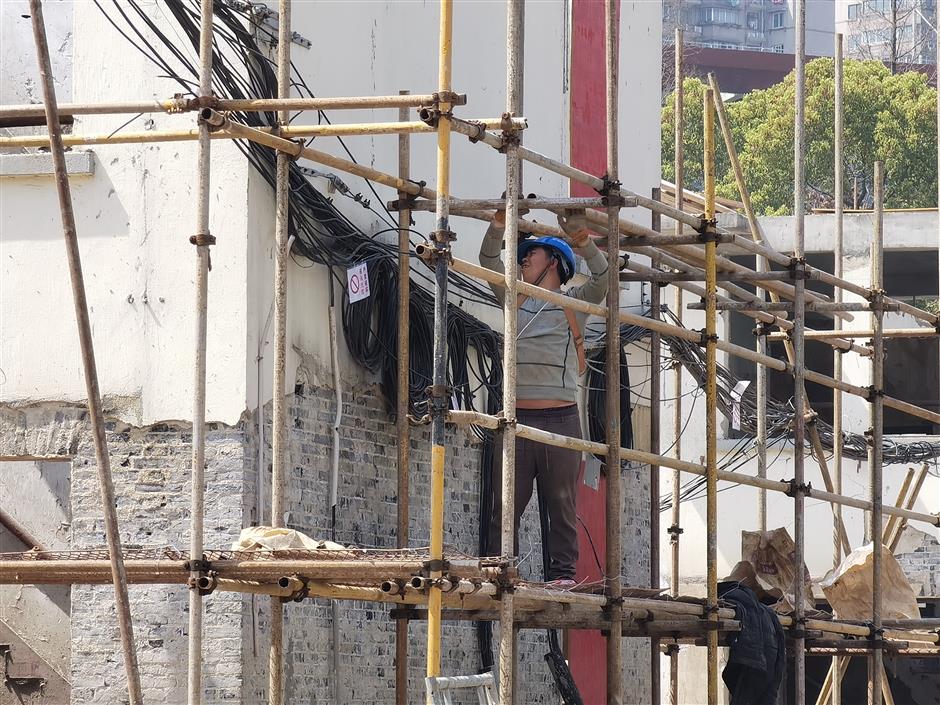 A worker erects scaffolding ahead of the renovation of the Caoyang No.1 Community on Tuesday.

The residential committee officials helped negotiate with the construction company to help restore part of Zhu’s interior after renovation.

“We’d like to keep every brick and tile for the historical community,” said Chen Zhongwei, an official in charge of the project. “The historic, cultural and art values are expected to be retained to the largest extent.” 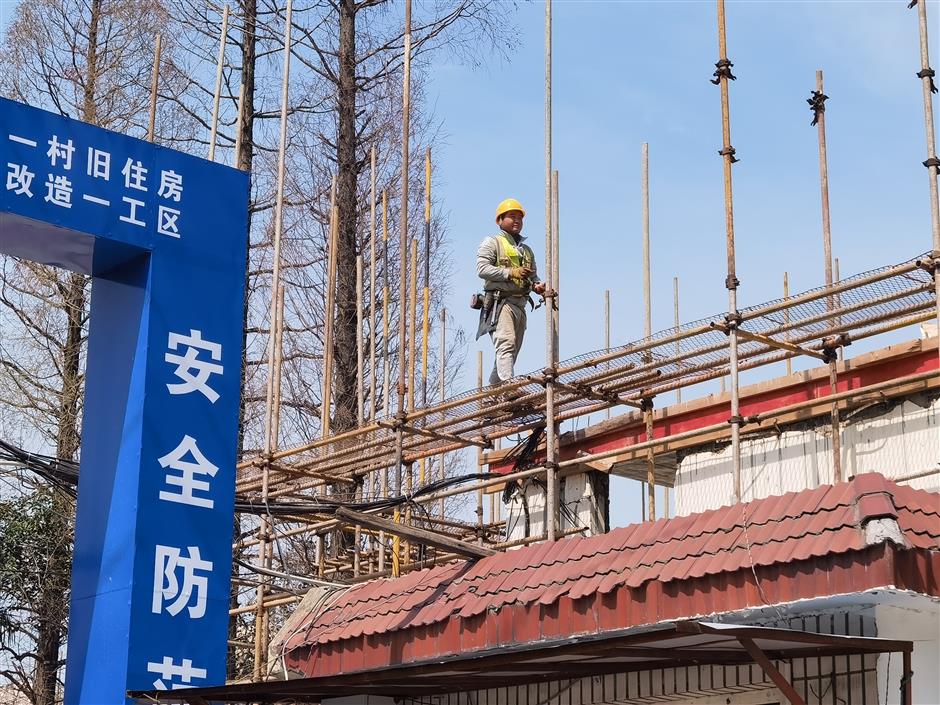 A worker works on an apartment building at the Caoyang No. 1 Community.