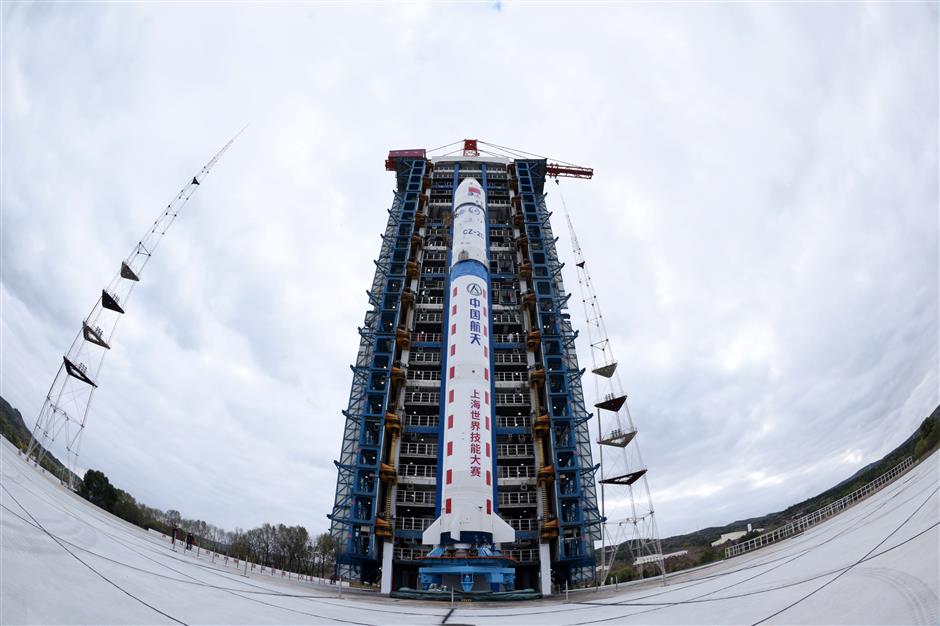 The satellite, which will conduct the first space exploration of solar Hα spectral imaging, will operate in a sun-synchronous orbit at an altitude of 517 kilometers, with a solar space telescope as its primary scientific payload. It will help researchers observe changes in the sun during solar flares, such as atmospheric temperature and velocity.

The naming of the rocket was part of celebrations signaling the one-year countdown to the 46th WorldSkills Competition which will take place in Shanghai on October 12-17 next year. It was a salute to the craftsmen who have made great contributions to the aerospace industry in China. It's also expected to promote public respect for craftsmanship, with a message that even common workers can achieve success with skills.

The satellite bears the patterns of the mascots and logo on the top and the name of the competition at the bottom. Its launch also propels a wish for candidates to skyrocket to success in the competition.

It was the 55th flight mission of the Long March-2D carrier rocket, which was developed by Shanghai Academy of Spaceflight Technology. It has sent 132 satellites, with a 100 percent success rate, into planned orbits in the past 30 years, well demonstrating craftsmen's extreme pursuit of skills excellence.

The solar-probe satellite's design includes the separation of its platform cabin and payload cabin, thus ensuring the ultra-high target accuracy and stability of the payload. Its production required high precision. For example, the range error of the gap between the payload hoverboard and the payload cabin floor should be controlled within 0.05 millimeters, which is as thin as a piece of hair.

The assembly team was well chosen, with all members highly skilled and familiar with the process to ensure the satellite was ready in time.

The naming of the rocket was another attempt by the 46th WorldSkills Competition organizing committee to promote the event. The WorldSkills flag was brought to the summit of Mount Qomolangma on May 27 last year and the Antarctic on January 19 this year.

WorldSkills is the highest-level vocational skills competition in the world and an important platform to promote skills excellence.

It will be organized on the Chinese mainland for the first time next year and Shanghai will be host city. By hosting the event, China wishes to enhance exchanges with other countries and help promote skills development around the world.

The rocket bears the mascots and logo of the 46th WorldSkills Competition at the top and the name of the event at the bottom.