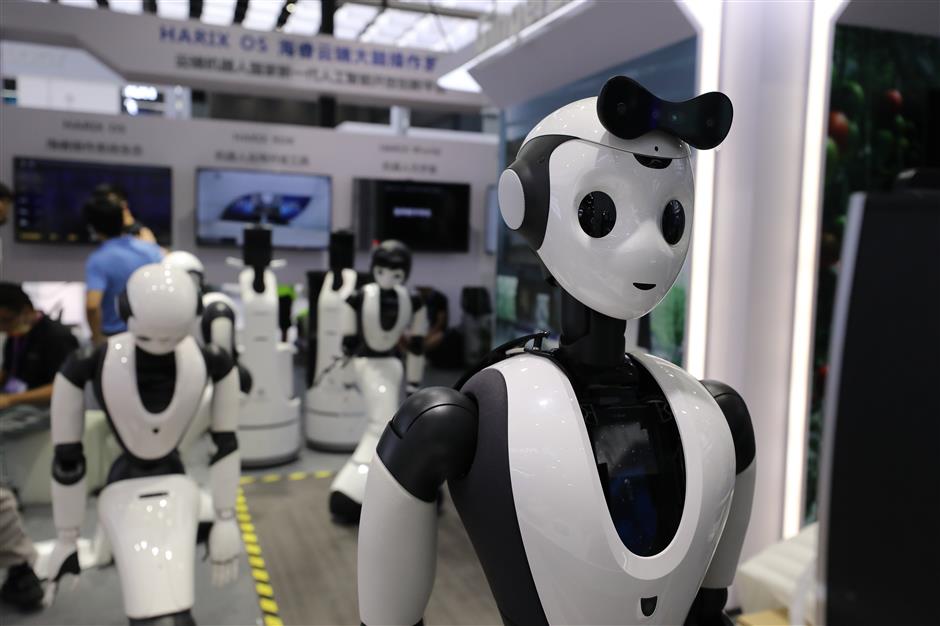 Some smart robots displayed during the 2022 World Artificial Intelligence Conference, which concluded in Shanghai recently.

Low-carbon, metaverse and smart terminals are among the new sectors that will provide fresh impetus for Shanghai's economy, attaining an industrial scale of more than 1 trillion yuan (US$143.7 billion) by 2025, according to a senior city official.

The city government has begun making arrangements on these "new tracks" to expand the city's novel industrial system, Wu Jincheng, director of the Shanghai Commission of Economy and Informatization, said on Wednesday.

Metaverse, or a network of 3D virtual worlds focused on social connection, will be used to enhance the substantial economy. An industrial highland of metaverse will be created with an industrial scale of over 350 billion yuan by 2025.

The industrial added value of Shanghai remains top among Chinese mainland cities. It increased to 1.07 trillion yuan in 2021 from 723 billion yuan a decade ago, Wu noted.

"Shanghai has attracted over 1,000 key integrated circuit companies and 40 percent of professionals nationwide," he said.

A fifth of China's high-end professionals and academicians in biomedicine are in the city, along with a third of the nation's AI talent, according to Wu.

The city began highlighting the "Shanghai manufacturing" brand in 2018. It aims to transform the former pillar industries developed in the 1990s, while developing new leading and key industries.

In the last decade, a number of major achievements have showcased the pinnacle of the city's manufacturing capability, Wu observed.

The nation's first home-developed C919 narrow-body aircraft, for instance, has successfully made its maiden flight in Shanghai, while the ARJ21 regional jetliners have been in commercial operations for years.

The first domestically-built large cruise liner has been assembled in the city's docks, while the Xuelong-2 polar expedition icebreaker sailed off from Shanghai.

"We aim to offer land for good projects, space for good industries, scenarios for good applications, talent for good innovation and resources for good teams," he promised.