Astronauts' keepsakes and entertainments are out of this world 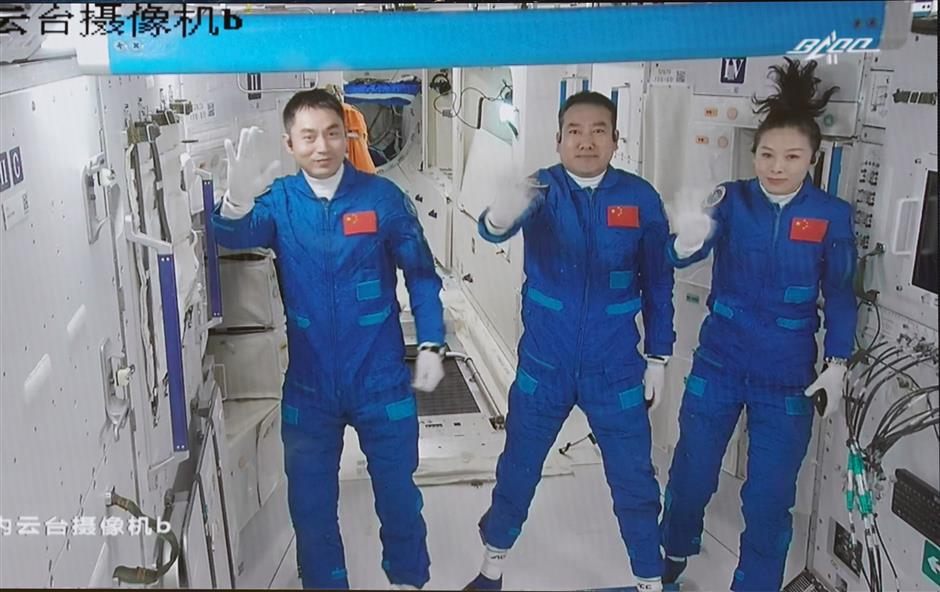 (From left to right) Astronauts Ye Guangfu, Zhai Zhigang and Wang Yaping wave after they enter the space station on October 16, 2021.

TV dramas, musical instruments, and an ink and brush set are among items brought on board by three Chinese astronauts who are set to spend six months in space.

Zhai Zhigang, the commander of the crew, has downloaded lots of TV dramas and songs to help them spend their leisure hours in Tianhe, the core module of China's space station, reported China Central Television. It will be the longest ever stay in space.

Zhai, also a lover of Chinese calligraphy, has brought ink, brush, paper and an inkstone along to continue to polish his calligraphic skills.

Ye Guangfu, the newcomer of the space mission, took along musical instruments, family photos and other items he would reveal later in space.

"The family photos will bring relaxation and comfort to me when I am agitated or tired," Ye told CCTV.

Wang Yaping, the first female astronaut to stay in China's space station, brought a larger musical instrument that she will reveal later.

Wang was considerate enough to bring gifts for the two other members for the Chinese New Year, which will be a big surprise for them.

A mother of a 5-year-old girl, Wang brought many photos of her adorable daughter and other families and friends.

Whether astronauts will be able to eat dumplings on the eve of the Chinese New Year, the traditional food for the most important Chinese festival, is one of the most popular topics among netizens.

Not only will they be able to east dumplings, but there will be three different types of stuffing, according to Zang Peng, director in charge of nutrition and food at the China Astronaut Research and Training Center, reported Xinhua news agency.

The three types of stuffing are the traditional pork and cabbage, mackerel, a delicacy of east China's Shandong Province, and the newly developed day-lily stuffing.