We all have seen or heard about "blind boxes," where customers buy a package from a brand containing unknown products. This is a popular marketing strategy for selling toys and other products. Now, some video makers on China's short-video sharing platforms like Douyin, or TikTok, and Bilibili have come up with a new form of cashing in on the trend – "blind unclaimed luggage."

The Douyin users who post these kinds of unboxing unclaimed luggage videos say that the unclaimed luggage come from airports, train stations, collateral from landowners whose tenants couldn't pay rent, or simply unwanted luggage left behind by graduates at their schools.

Most of the unwanted luggage appearing in the videos come from the Xianyu app, China's second-hand market. Their value range from a few dozen yuan to thousands of yuan.

Some of the video makers unboxed second-hand clothing items, cell phones, makeup items, and even jewelry of luxury brands from the bags. And, the steep price difference between some of the items and the bag has garnered a lot of online attention.

Can you really buy unclaimed luggage from airports?

One Bilibili (another video-sharing platform) user uploaded a video on July 30, in which she unboxed a luggage she claimed to have bought for 1,000 yuan (US$148). The user said in the video that the luggage came with a combination lock so it had never been opened and she didn't know what was inside.

The video later showed the luggage contained women's clothing, books, makeup items, a camera bag and a memory card as well as, most noticeably, a necklace from a luxury brand that was worth more than 40,000 yuan. 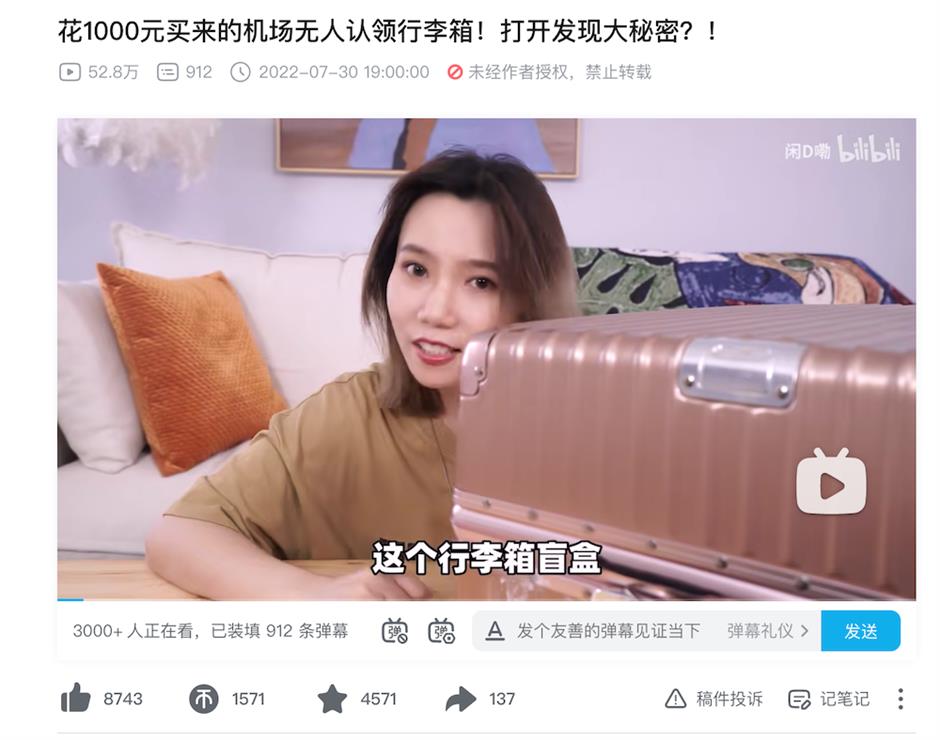 The Bilibili user unboxes an unclaimed luggage that she claimed to have bought for 1,000 yuan (U$148).

The unboxing of the luggage had many netizens doubting the authenticity of the suitcase. Some wondered if the owner was looking for the suitcase, others asked whether buying unclaimed luggage is legal at all.

The name tag of the luggage can be seen in the video and it said the shipment date was June 27 and it came from Yiwu Airport in Yiwu City, Zhejiang Province, famous for its commodities market. 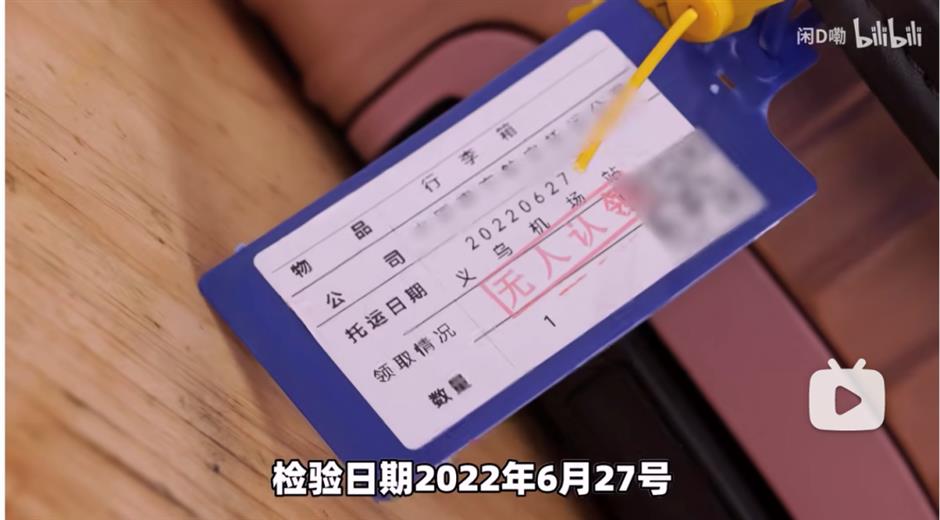 The name tag shows that the luggage came from Yiwu Airport.

A staff at Yiwu Airport said in an interview that they hold onto unclaimed luggage for seven days. After that the luggages are sent back to where they come from. They do not dispose of the unclaimed luggage, and definitely don't sell them, he added.

Each airport has different regulations on unclaimed luggage and other things

A staff member of the lost and found department at an airport in Shanghai said if the unclaimed item was a power bank, they hold onto it for only a week; the duration is six months for regular belongings and one year for valuables such as laptops, cellphones and cameras. If still unclaimed beyond their time, the items are handed over to other departments.

At some airports, unclaimed luggage is put away in a storehouse for as long as a year, if still unclaimed, they are handed over to related departments. Airlines will definitely not sell or auction the unclaimed luggage even if the bags lie unclaimed for years, according to the operator of a domestic airline.

A China Railway operator said that they keep the lost items for 180 days and if still unclaimed, they dispose of them.

Most of the unclaimed luggage comes from the second-hand market app, Xianyu

One of the sellers of unclaimed luggage on Xianyu said most of his luggage comes from students who leave their bags behind at their school dorms. The seller said he promises no legal issues with his luggage purchases but claimed that most of the unboxing videos' valuables were put in by the video makers themselves.

Another seller on the app claimed that his luggage came from airports, short-lease apartments collateral, and those dumped by relocated companies.

Other than unclear sources, the luggage sold on Xianyu contain key words such as "luggage used by girls," "luggage left by female tenants," which often go with blurred female pictures. 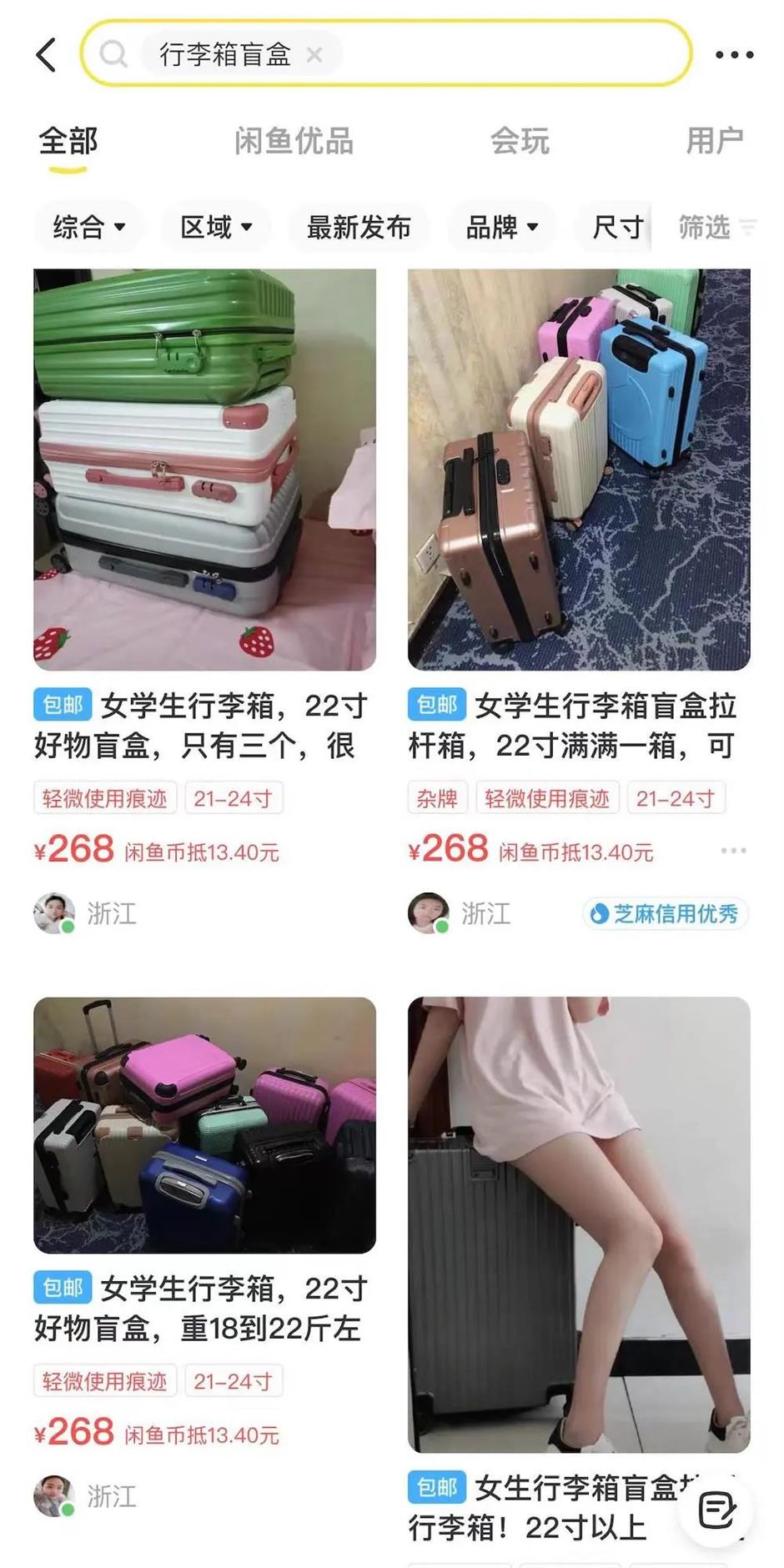 The owner has legal rights to retrieve the sold luggage

In China, it's illegal to buy and sell unclaimed luggage. Without the owner's consent or authorization, selling the luggage would be violating the owners' rights, even if the luggage remain unclaimed for a long period of time and have been handed over to a third party, a lawyer pointed out.

Still, many netizens believe that the unclaimed luggage are just a marketing gimmick – that plays into many viewers' curiosity – in order to sell overpriced second-hand items.