Mark the date, Chagall exhibition to open in city

The largest exhibition of works by modernist Marc Chagall (1887-1985) ever held in China will open at the Shanghai Jiushi Art Museum on July 31.

Following Beijing and Chengdu, Shanghai is the third and last stop of the "Love is the Color: Marc Chagall" touring exhibition.

Varying from oil on canvas, watercolors, etching to gouache and ink on canvas, the exhibition introduces the legacy of the master. Art critic Robert Hughes considered his work "not only the dream of one people but of all humanity."

Predating surrealism, Chagall's early works were among the first expressions of psychic reality in modern art.

He presented dreamlike subject matter in rich colors and in a fluent, painterly style while reflecting an awareness of artistic movements such as expressionism, cubism and even abstraction.

Chagall's repertory of images, including massive bouquets, melancholy clowns, flying lovers, fantastic animals, biblical prophets and fiddlers on roofs, all helped to make him one of the most popular major innovators of the 20th-century School of Paris.

The first flying figure appearing on his canvas was Bella, his first wife who died in 1945. His creativity was later inspired by his new love, Valentina Brodsky, whom he married in 1952. During this period, his works are marked with energetic and joyful feelings, expressed by vibrant lines and vivid colors, such as "Lovers on Yellow Background" (1960) that will be on show at the exhibition.

The exhibition also includes some works reflecting nostalgic touches. As an artist who had experienced two world wars, he traveled extensively. Yet he buried his deep passion toward his homeland under his brushstrokes, like "Russian Village" (1929) which will also be on show. 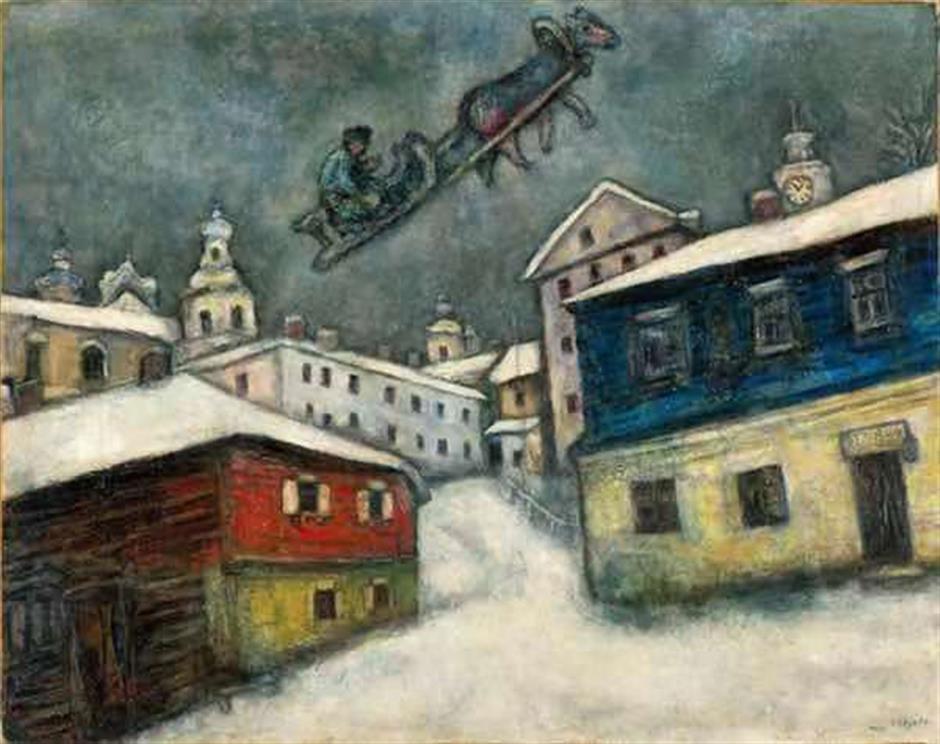