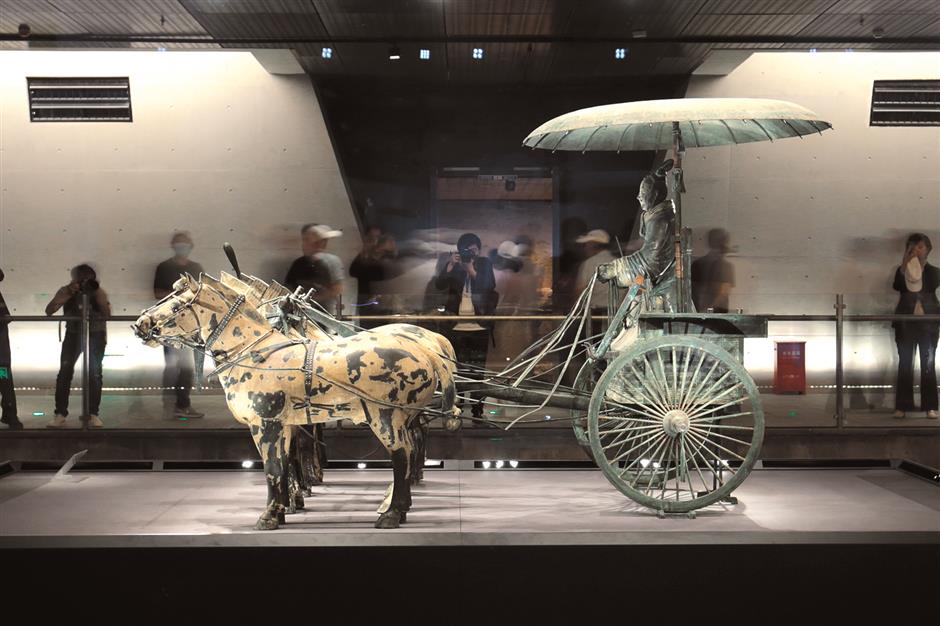 The bronze chariots excavated from the famous Mausoleum of the First Qin Emperor are listed as artifacts that are permanently prohibited from going abroad.

Listed as a UNESCO World Heritage Site, the famous Mausoleum of the First Qin Emperor – Qin Shi Huang (259-210 BC) – in northwest China's Shaanxi Province highlights not only a massive terracotta army but also magnificent bronze chariots.

The archeological discovery of the bronze chariots can be traced back to the summer of 1978, when archeologist Cheng Xuhua led a team to excavate the land about 20 meters west of the mound of the emperor's mausoleum by using Luoyang shovels, one of the most important tools in Chinese archeology.

In October of 1978, Cheng's team member Yang Xude found something with metal luster in the soil as deep as seven meters below ground. Taking a closer look, Yang believed it was a gold adornment but still had no idea exactly what it was.

Hearing the news, Cheng immediately extracted more soil samples. Driving the semicircular shovel head into the ground and lifting it up, Cheng observed another piece of silver and gold from the soil. More astonishingly, a golden tassel was also hidden in the soil. The thrilled Cheng believed there were precious bronze chariots underground, which he had searched for four years.

The official excavation, which confirmed Cheng's guess, was conducted in October of 1980. Cheng and another archeologist Yuan Zhongyi did careful calculations before marking the area. On November 19, they excavated an intact brick from the Qin Dynasty (221-207 BC) at a depth of 2.4 meters below the surface. In December, they found bronze fragments from the soil as deep as 5 meters below ground. They finally saw two exquisite chariots, although damaged, at a depth of eight meters below the surface.

Based on the damage, archeologists estimated the two bronze chariots were broken into 3,000 pieces, so both would require extensive restoration. They estimated it would take as long as six months to clear up and reassemble the fragments of the bronze horse head.

Due to uncertainties like weather and security, it was not considered safe to restore the chariots on site. Figuring out how to transfer them from the site to an indoor workshop was the primary task for the archeologists.

They finally decided to divide the chariots into four parts. After digging 10-meter-deep trenches, placing large steel plates under the four parts and covering them with planks of wood, archeologists then used a crane to lift the chariots to the surface before transporting them to the workshop.

It took experts three years to reassemble the fragments of the No.2 chariot, which was displayed on October 1, 1983. Four years later, the restoration of the No.1 chariot was completed.

Both of the restored chariots, each with a team of four horses and a charioteer, are half the size of the original ones. They are adorned with gold and silver pieces as well as colorful drawings. Emperor Qin Shi Huang was buried with everything he was thought to need in the afterlife, including the chariots.

Weighing 1,061 kilograms, the No.1 chariot is 2.25 meters long and 1.52 meters high. It serves as a safety car clearing the way for the No.2 chariot, which contains a chamber with three windows on three sides and a door on the back.

The No.1 chariot includes a large umbrella with an elaborate design that could be manipulated to shade the sun at different angles.

More surprisingly, the canopy and umbrella handle can be separated and transformed into a shield and spear.

During the final years of Qin Shi Huang's life, he was almost assassinated at least three times, explaining why the umbrella also functions as a defensive weapon.

Weighing 1.24 tons, the No.2 chariot is larger than the No.1, measuring 3.17 meters long and 1.06 meters high. Holding lead ropes, a man wearing a long robe and belt to carry a sword would drive the chariot.

Behind the charioteer is the chamber used to seat his master. With a turtle-shell like roof, the chamber is patterned with a dragon, phoenix and cloud. After thousands of years, the windows can still easily be opened and closed.

These two bronze chariots are displayed at the Emperor Qinshihuang's Mausoleum Site Museum in Xi'an. The national treasures are listed as artifacts that are permanently prohibited from going abroad.