Modern renaissance of the Chinese fiddle

When Lu Yiwen studied the two-stringed erhu in her childhood, she had to practice Western violin works like "Zigeunerweisen" or "Carmen." There just weren't many traditional compositions available for the Chinese instrument.

No ancient melodies survived for the instrument that can be traced back more than 1,000 years, and not many new compositions were created until about a century ago. But the situation has been changing rapidly.

"That's no longer the case for my students at the Shanghai Conservatory of Music," Lu, 30, told Shanghai Daily before a recent concert that featured erhu and violin.

"It is getting more popular these years, among the top three traditional Chinese musical instruments in terms of children's willingness to learn. Many new compositions have been made, and not just for solo but also for playing with orchestra, string quartet, guitar, piano, etc."

The rising popularity of the erhu can be seen in Lu, a graceful young player. 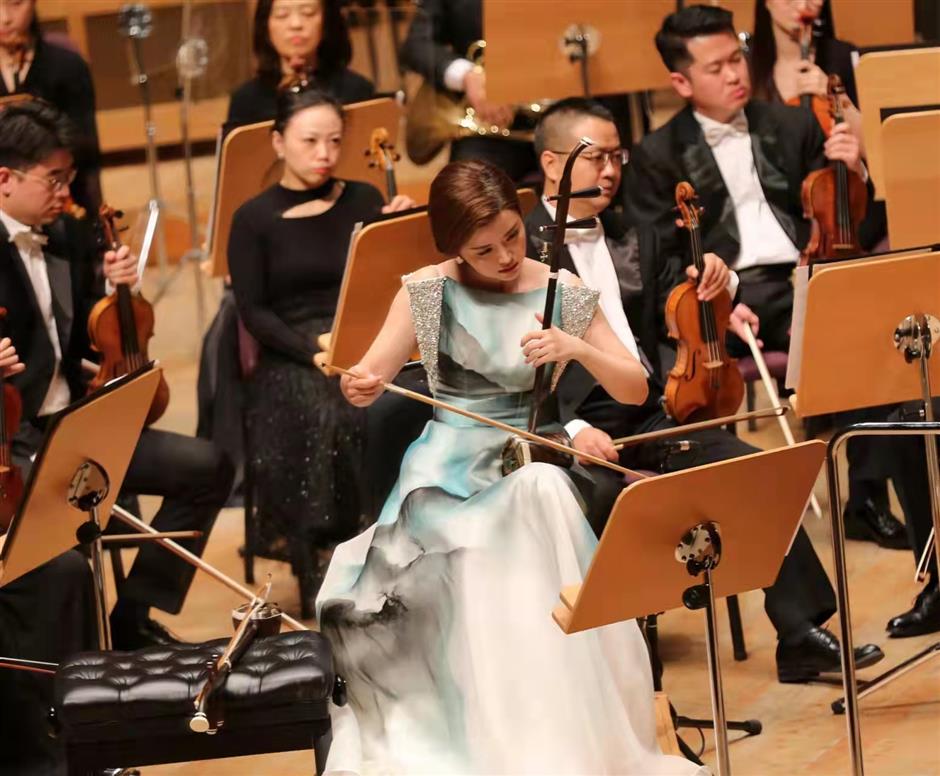 Lu Yiwen plays erhu in a recent concert in Shanghai.

Performances featuring erhu used to attract older audiences. Many people also associated erhu performers with older uncles, possibly an image left over from two of the most famous masters Abing (1893-1950) and Liu Tianhua (1895-1932).

Liu, who played violin, was a major contributor to creating erhu-making standards, composing music for the instrument and systematically perfecting performing skills.

But today's erhu players like Lu are tuning new life into the ancient instrument, creating a young, cool and fashionable image.

Since 2018, she has been the brand ambassador for instrument strings company Thomastik-Infeld and instrument case brand Bam. Seizing on the rising popularity of the instrument, the two international brands have extended their product lines into erhu in recent years.

Erhu is among the most popular instruments used when composers from all over the world try to create a Chinese sound in music. One can feel the spirit when its unique sound emerges in soundtracks for movies like "Kung Fu Panda" and "Crouching Tiger, Hidden Dragon."

Many violinists, including Isaac Stern and Yehudi Menuhin, were fascinated by the sounds and colors created by the two strings.

It is often introduced to foreigners as the Chinese fiddle, but Lu says the "simple" instrument deserves its own name.

"The modernization of the erhu has borrowed some performance and compositional skills from violin, but it is such a unique instrument that I think it is best introduced just as erhu," she explained.

"It is the musical instrument that creates a sound that most resembles the human voice."

Lu's most recent performance included an intriguing music dialogue with violinist Li Weigang, who co-founded the notable Shanghai Quartet in 1983.

The concert, "Wonder of Strings by Barber and Qigang Chen," puts the two string instruments side by side, featuring Samuel Barber's "Violin Concerto, Op. 14" in the first half and Chen's "Un temps disparu" for erhu and orchestra in the second half.

The two performers had collaborated before when the Shanghai Quartet introduced Lu to American audiences with "Little Cabbage" for string quartet and erhu. "Little Cabbage" is among the many new erhu compositions in recent years.

"We work a lot with traditional Chinese instruments, especially in recent years, and for me, a violinist, certainly the erhu is the most intriguing," said Li.

"There are many new works now, and the composers try to brave the challenge of blending the unique sound of erhu with Western music language. I look forward to more such compositions, especially those that can be played with a quartet." 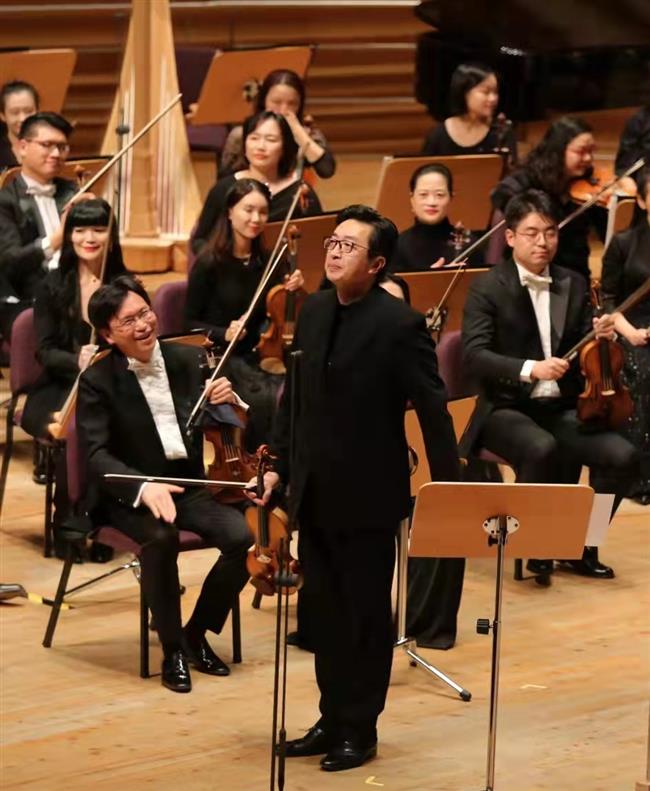 "Un temps diaparu" was revised by Chen for erhu from his highly-acclaimed 1995-1996 composition "Reflet d'un temps disparu" for cello and orchestra. It was premiered by Yo-Yo Ma and the Orchestre National de France under the baton of Charles Dutoit in 1998 at the Theatre des Champs-Elysees in Paris.

Chen later transcribed the piece for various performing combinations, including cello and ensemble of Chinese instruments, erhu and orchestra, and viola and orchestra.

The work is inspired by a main melody from a well-known Chinese guqin (a seven-string plucked instrument similar to the zither) piece, "Three Variations on Plum Blossom."

"Since the piece is inspired by a guqin melody, it is natural to play it on the erhu, but still very challenging as it was originally composed for cello," Lu said.

"I had many discussions with master Chen when preparing for the concert, down to very technical details of how to play certain parts."

Over the years, Lu has got used to such challenges, especially when playing pieces that contain erhu parts that were composed by a foreign musician.

"Many contemporary musicians blend all kinds of ethnic instruments in their compositions, including erhu, which is wonderful," she said.

"But sometimes they compose it as if they were composing for violin. Well, that is the really challenging part."