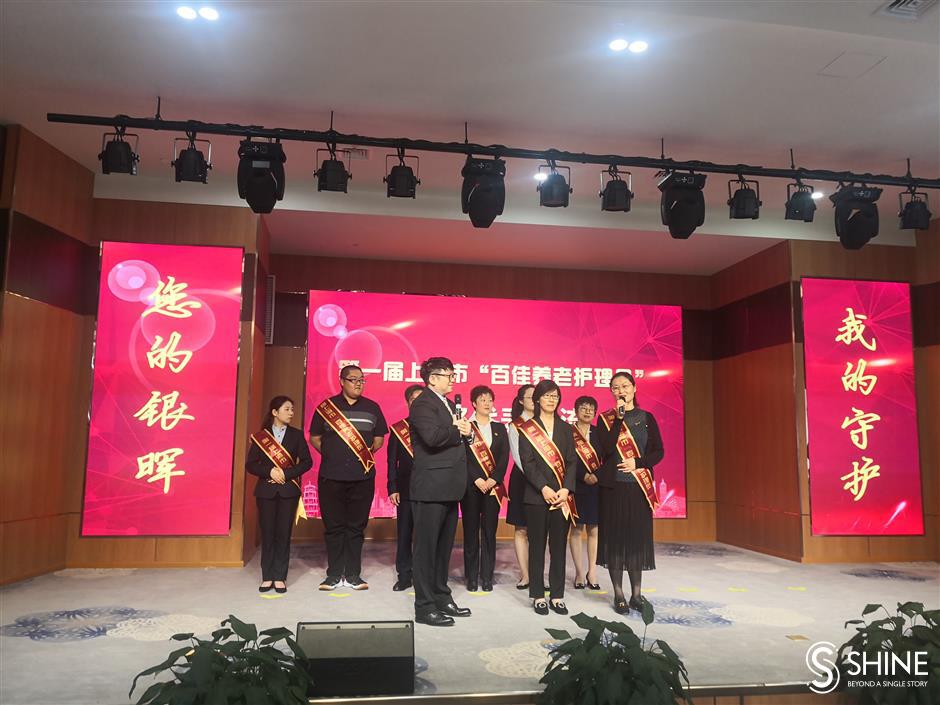 Some of the nursing staff who are honored for their work with the elderly on Friday.

One hundred nurses at senior homes in the city were honored on Friday for their loving hearts and meticulous care of senior citizens.

Among them was Zhao Qiongqiong, 25, who has been in a senior care post for six years.

Some of the people she takes care of suffer from cognitive disorders and physical disabilities.

"Observation and communication are important," she said. "It helps me learn the psychological and physical changes of the elderly and detect anything abnormal immediately.”

Zhao added: "My wish is the happiness of seniors. I listen to them, communicate with them, understand them and cheer them up, which is the way I get along with them.

"I like staying with seniors and taking care of them, and I treat them like my own grandparents.”

Gu Weibin, a male nurse in his 20s, said he was confronted with many misunderstandings and opposition when he started the job.

"But I was determined when making the decision despite all the opposition," he said.

Meanwhile, the city has established a senior care worker information management system, gathering information on nearly 70,000 nursing staff which is available to the public.

"The system includes information such as their age and skill level and acts like a database, which provides reference to authorities when we make policies via data analysis," said Jiang Rui, deputy director of the Shanghai Civil Affairs Bureau.

"At the same time, it helps authorities enhance management of these workers and the public learn about their information," said Jiang.

The increasing number of elderly people in the city has created a growing demand for more diversified senior care services and higher expectations of nursing staff, the bureau said.