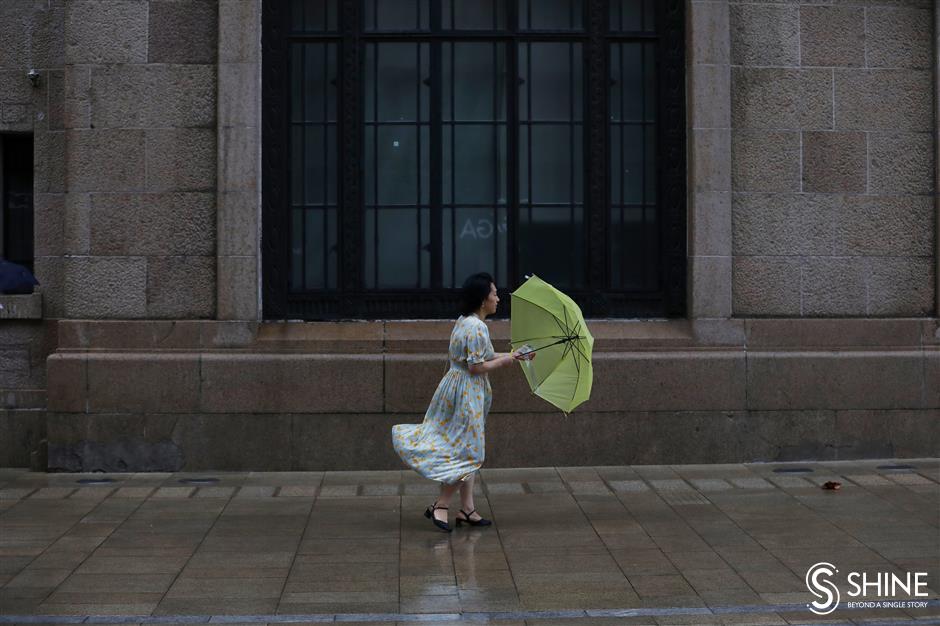 A woman walks against the strong wind on Nanjing Road E. in Huangpu District on Monday. 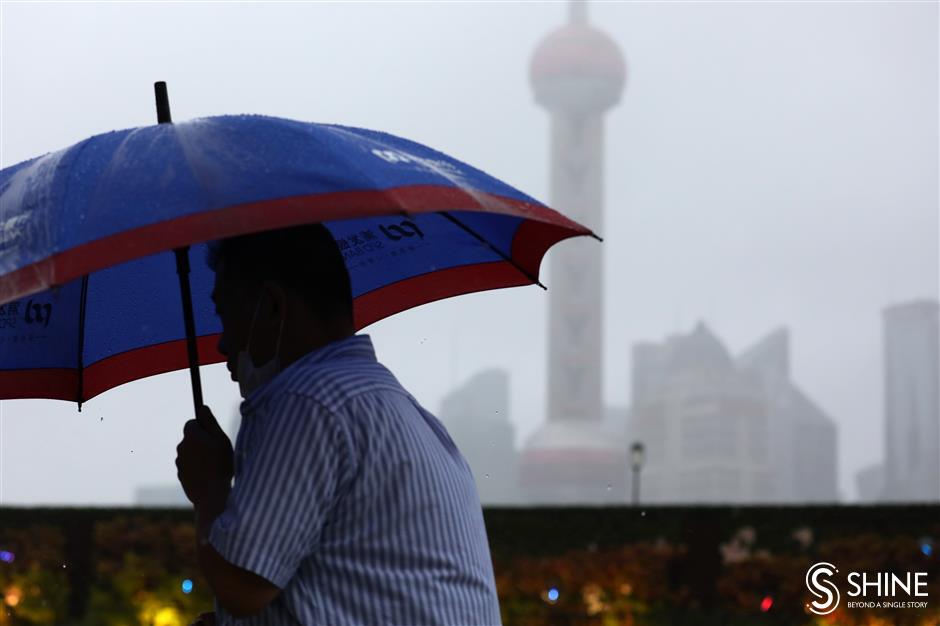 A man passes the Bund amid heavy rains and strong winds on Monday.

Chanthu, this year's 14th typhoon, is expected to whirl over the sea, about 100-200 kilometers east of Shanghai, from Monday night to Wednesday, and will move northeast from Thursday onwards, the local weather bureau said in an update.

Chanthu's eye was about 128km from Shanghai at 3pm on Monday, moving northwest at a speed of 10km per hour as it nears the city, the bureau said.

The heavy rains and strong winds brought by Chanthu are forecast to stay in the city until Thursday.

Shanghai Mayor Gong Zheng held a video conference on Monday morning, asking all relevant departments to make every effort to defend against the effects of the typhoon so as to ensure the safety of residents and the city.

"It is necessary to do a good job in transferring and evacuating related personnel as soon as possible, and ensure that no ship or person is missing, and no blind angle is left," Gong said.

He also said that all districts, departments, and units must take immediate action to form a strong joint force for flood and typhoon prevention. 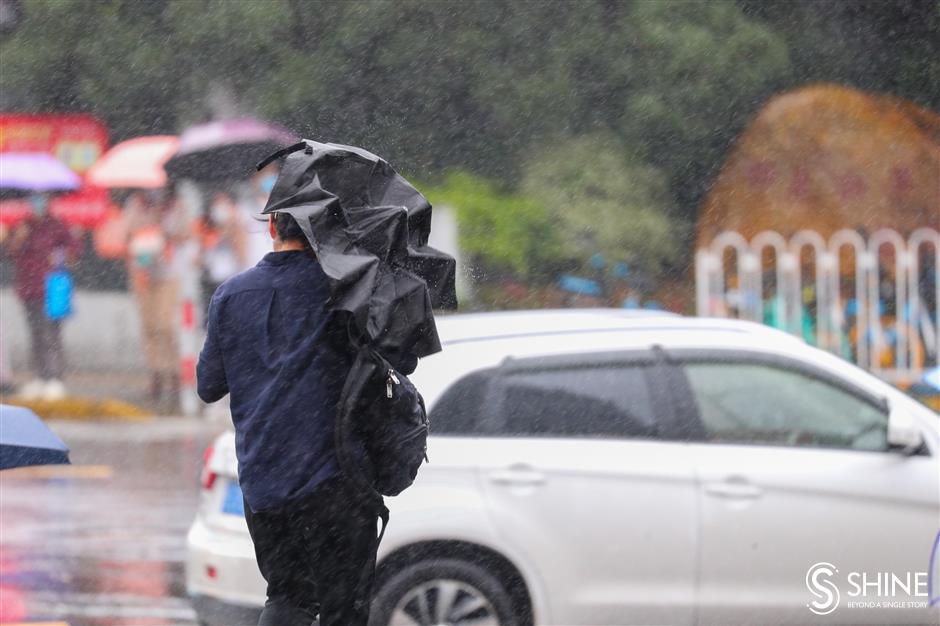 A pedestrian hangs on to his umbrella amid strong winds and heavy rains.

The State Grid Shanghai Co said on Monday it has completed various tasks to prepare for Typhoon Chanthu, along with many other local departments.

The company has carried out risk identification and management, including checking substations, transmission lines and power-supply facilities, and strengthening flood control measures for underground substations, low-lying substations and cable tunnels.

There are 173 emergency power repair stations across the city, and more than 3,700 electricity workers are on 24-hour standby during the typhoon season.

More than 800 recovery vehicles, 45 power-generating vehicles have been dispatched to prepare for the typhoon, the company said.

Residents who have electrical problems are advised to call State Grid's emergency line – 95598. 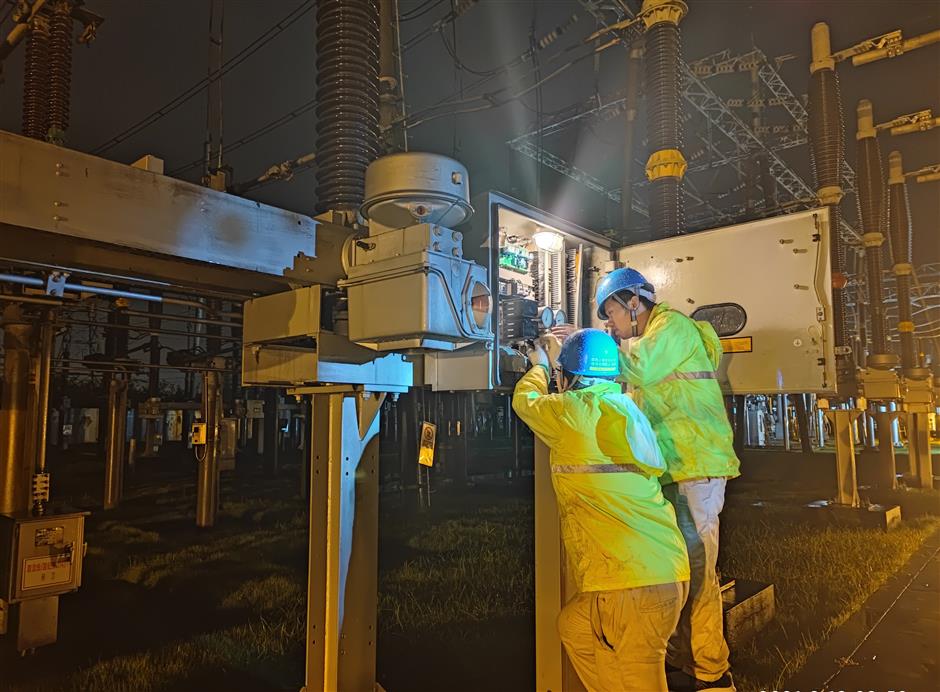 Meanwhile, the Shanghai Maritime Safety Administration has organized for a total of 994 ships to evacuate, with 1,655 ships at anchor – 211 anchored ships, 1,139 berthed ships and 305 sheltered fishing vessels.

More than 300 people are on 24-hour standby to ensure maritime safety over the typhoon season. In addition, 22 marine cruise ships, three professional rescue ships, and 141 various social emergency ships are also on standby, the administration said.

Elsewhere, all landscape lights in the city were switched off on Monday night while 438 local parks will remain closed on Tuesday due to the typhoon, the Shanghai Greenery and Public Sanitation Bureau announced.

Their reopening will depend on the weather condition, according to the bureau.

As of Monday afternoon, more than 400 trees had been uprooted under the influence of the typhoon, with authorities reinforcing around 24,000 trees.

About 26,000 sanitation workers had cleaned 2,905 streets vulnerable to flooding in the city by Monday afternoon, and fallen leaves, garbage and sludge at 356,000 drainage outlets had been cleared.

A total of 1,347 tons of garbage on streets and inside garbage bins had been removed.

More than 6,500 advertisement boards and signboards for businesses had been dismantled as of 3pm as they posed a safety risk. 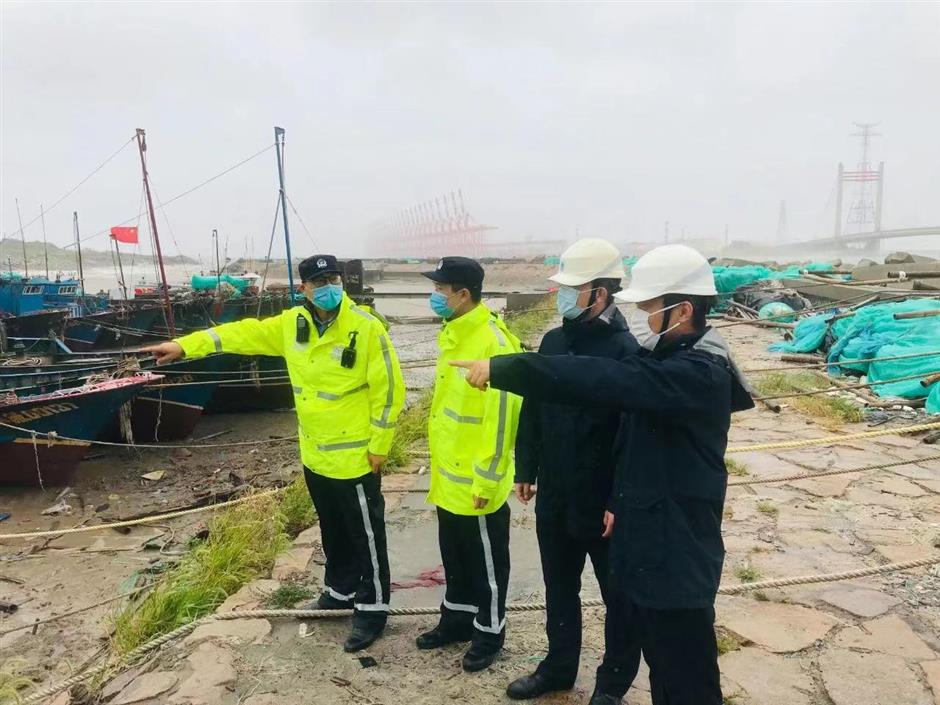 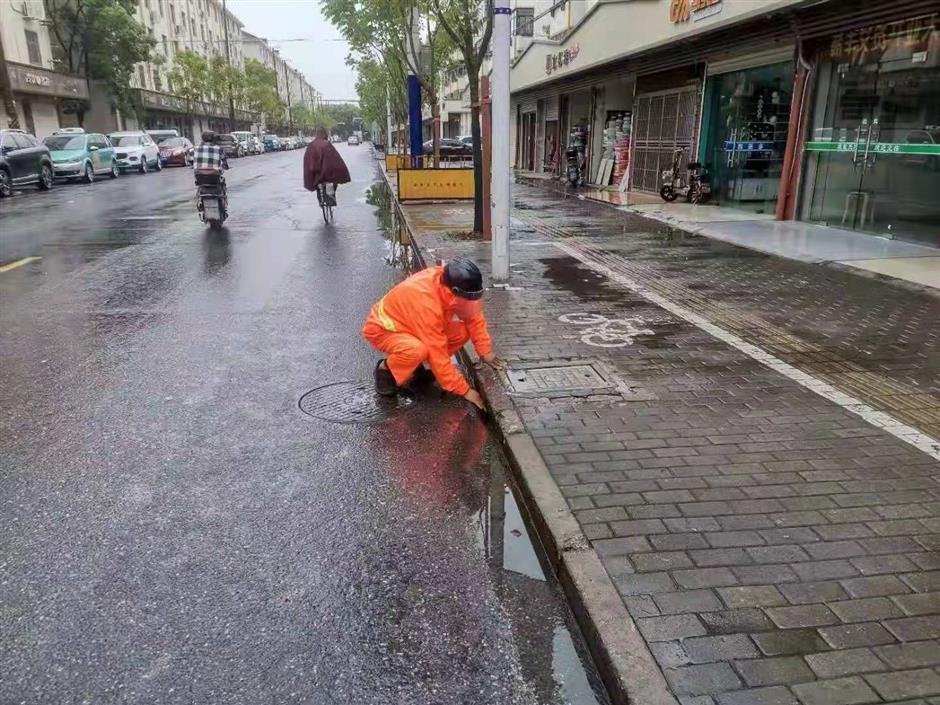 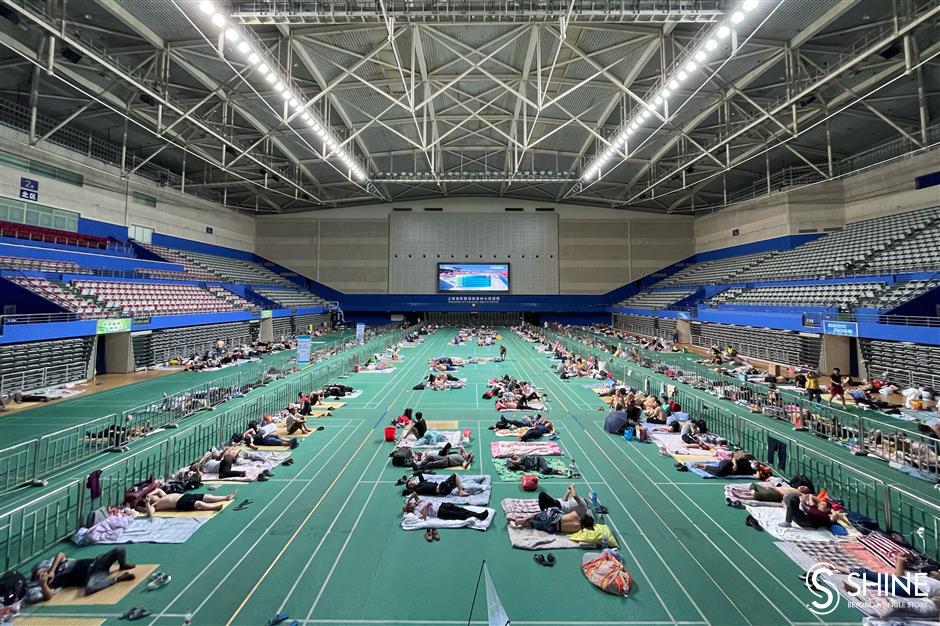 Evacuated people rest at a stadium in the Pudong New Area on Monday.