From kindergarten to college it's back to school season 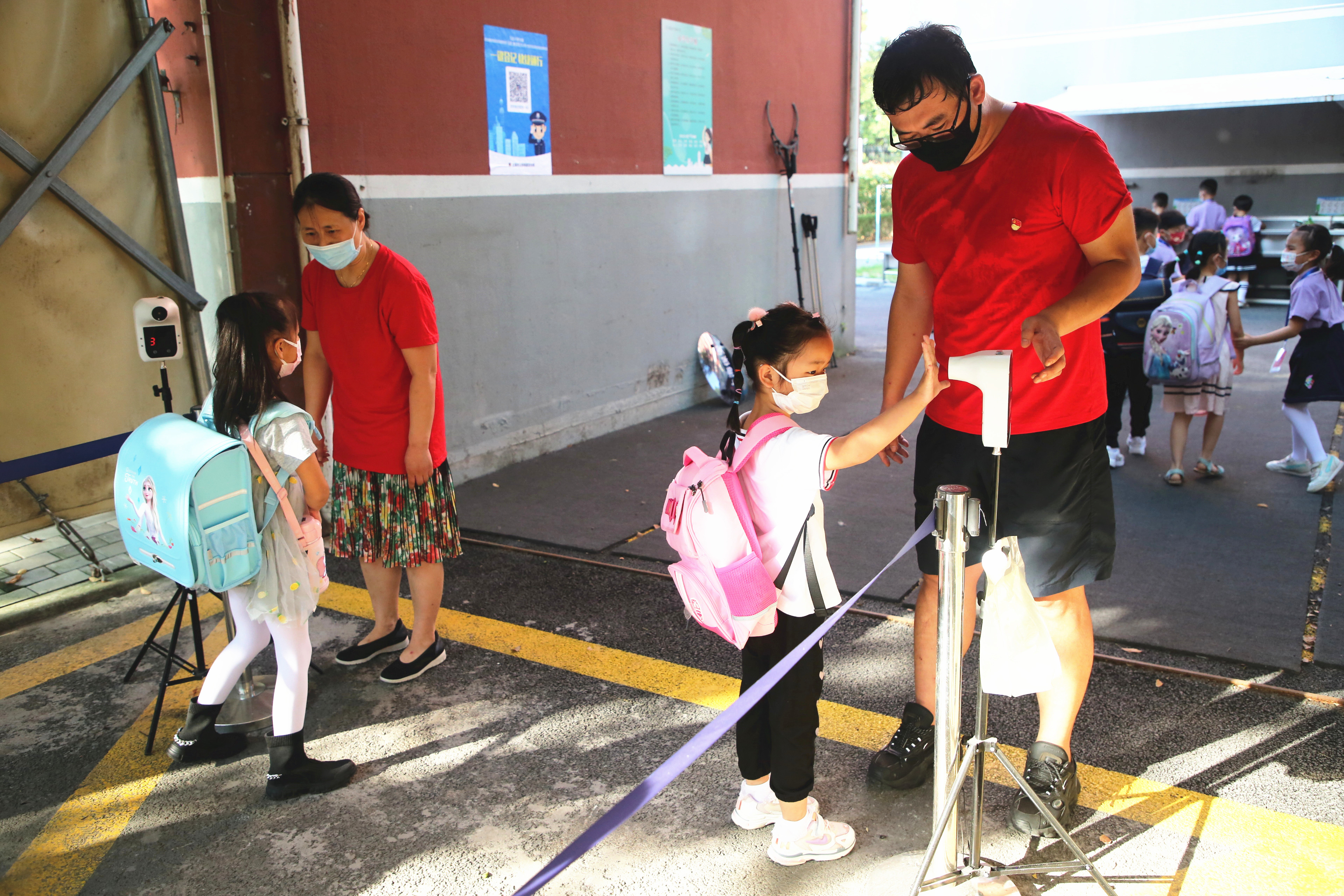 He Yueling, a fifth-grade student at Jiading District Experiment School, won't be going home right after school this semester. Instead, every day after 5pm, she is picked up by volunteers at the Shanghai Institute of Optics and Find Mechanics, where her parents work, and taken to an after-school care program the institute initiated this month.

The program aims to help employees with the institute who are not able to leave work in time to pick up their children at school.

A total of 48 children are divided into three classes based on their ages and looked after by volunteers.

A fifth grader said this is the second time she has participated in the program. Before it was launched, she had to go to her mother's office to do homework.

"Sometimes when my mother was doing experiments in the lab, I was left in the office alone," she said. "And now in the after-school care classroom, I can spend time with my friends, and it's a lot happier."

She finished her homework before dinner was served. The set meal contained rice and three dishes with sides of fruit and yogurt."Our canteen prepares all the food," said Hu Weifang, deputy chairman of the institute's labor union. "We change the meal every week to ensure quality, variety and nutrition."

Volunteers with the institute are in charge of picking children up from school, delivering dinner and after-dinner training sessions. According to the latest regulation issued by the education authorities, no commercial off-class tutoring classes are allowed anymore, but nonprofit training sessions are encouraged.

Here in the after-school care program, children can learn calligraphy and use new materials, such as pens with invisible ink. Some of the volunteers are teachers with the nearby Shanghai Experimental School of the Chinese Academy of Sciences.

The institute said half of its researchers are non-Shanghai natives under 35 years old whose parents live in other provinces and are not able to take care of their grandchildren in Shanghai.

"We have an online chat group covering the after-school care program," said Chen Weibiao, director of the institute. "Every morning, parents send texts to the group if their children are attending after-school classes that day, and volunteers pick the students up."

"We hope that a complete system could be established that inspires students to learn more new things," says Zhu Yu, director of the Jiading Education Bureau. "And I think schools and the authorities alone are not adequate to build such a system."

Students gear up for a new school year 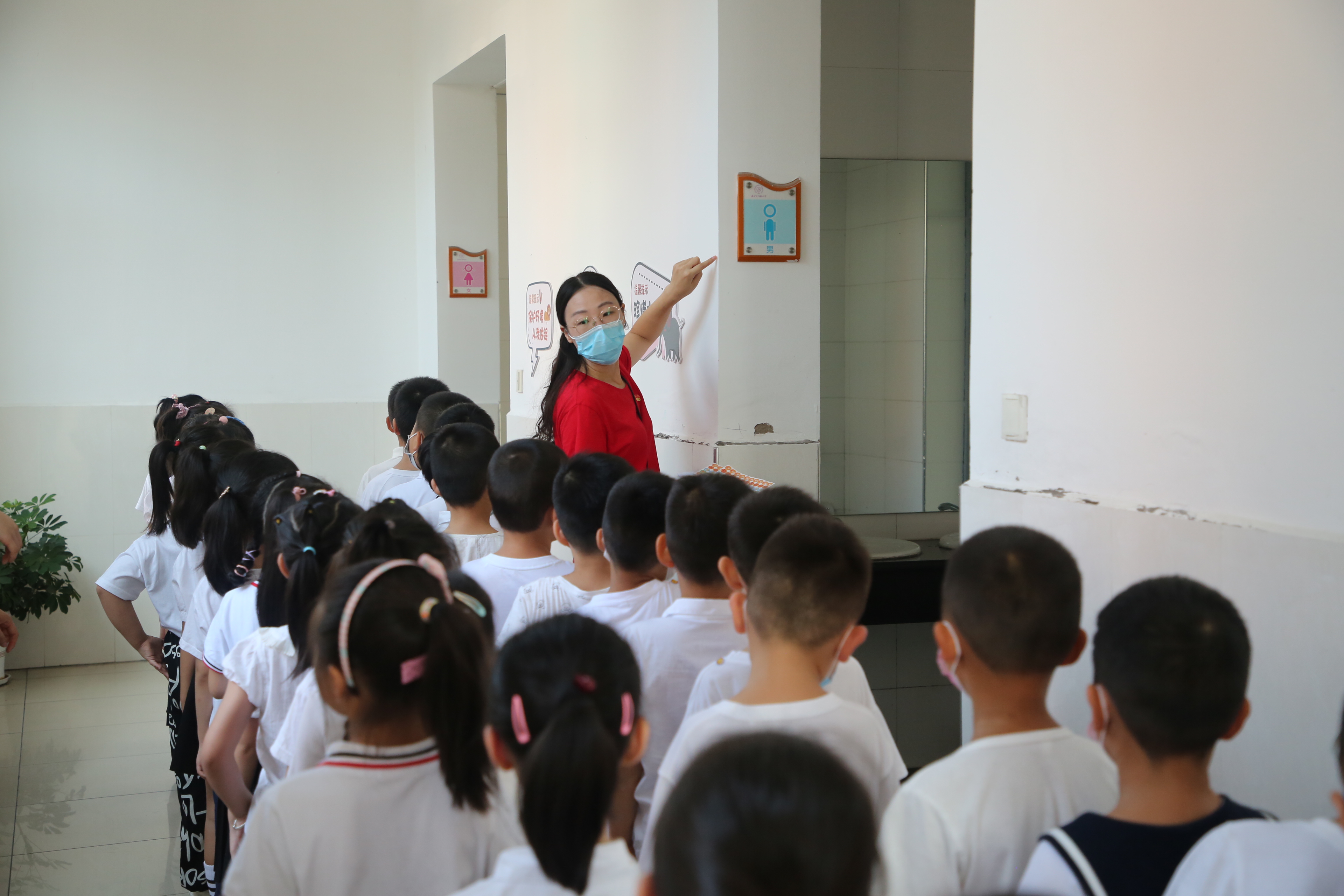 Nearly 38,000 children started their campus life at new kindergartens, primary and middle schools in Jiading District on September 1, the hottest first day of school in the 21st century.

"We will guide the new pupils to form good habits and get familiar with the campus through activities," said Zhu Ying, headmaster of the school.

Many of the first graders arrived at the school around 7am. Guided by teachers and volunteers, they entered the campus after having their temperatures checked. Fifty second graders then took them to wash their hands and onto their classrooms hand in hand.

"I got familiar with the location of each classroom beforehand. This way, I can quickly show the young students their classrooms," said Liu Zixuan, a second-grader volunteer. To him, it's also an unforgettable experience.

While most new pupils managed to start their new campus lives easily enough, a few still cried for their mothers. Chen Wanwan, a teacher responsible for the first grade, comforted them with a smile.

In the morning, first graders learned about COVID-19 prevention and school etiquette. After that, teachers showed them around the restrooms, canteen, teachers' offices and library.

"We hope the children will get used to their new identities as pupils as soon as possible, with the help of teachers and senior schoolmates," Zhu said. 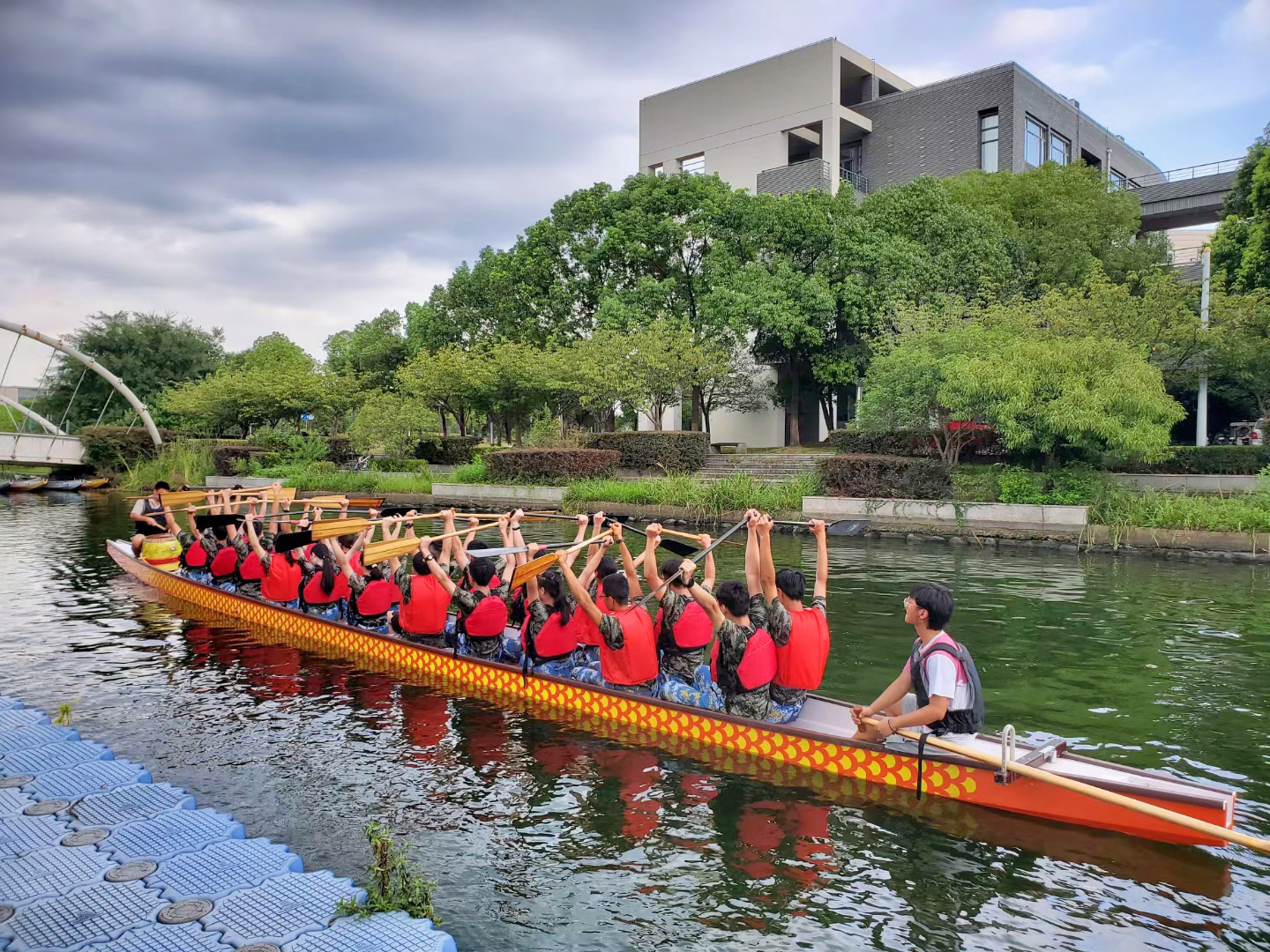 With the ringing sound of a starting gun, the second "Torch Cup" dragon boat competition kicked off on the Tongxin River on Tongji University's Jiading Campus. As the boats reached the finish line, one Camp Six rower suddenly raised his paddle into the air – his teammates realized the paddle was broken because he rowed too hard.

The student greatly boosted the team's morale, which went on to win the next several competitions including the championship.

"This dragon boat race gave me the profound realization of the power of working shoulder to shoulder," said Tang Yijia, one of the rowers.

The dragon boat competition brought the students much joy to the everyday military training, as everyone experienced the spirit of unity during the training and racing. Many students were motivated to join the school's dragon boat association after the start of the school year.

Zhang Xiuyu, a teacher in the work committee organization of Tongji's Jiading Campus, said the school emblem is an image of "three people rowing a dragon boat," and the sport vividly embodies the university spirit of "standing side by side, thriving to become stronger."

"We have added the dragon boat competition to the military training with the hope that students can pick up the paddles, move forward in unity, temper their ambitions and backbones and gain a deeper understanding of the true meaning of helping each other in the same boat," said Zhang.

To increase student interest, the university has upgraded military training from the former practices of walking, military posture and tidying internal affairs to incorporate more diverse and interesting tasks. In addition to the dragon boat training and race, students also wore virtual reality glasses to experience launching firepower in a virtual world.

Although the gala event was canceled due to COVID-19 prevention and control, students organized a flash mob to showcase singing, dancing and other performances. Other activities included a speech contest themed "Celebrating the 100th anniversary of the founding of the Communist Party of China," a poster and painting competition, a "Revisiting the Long March" march and educational sessions about the "Four Histories" which refers to the histories of the Communist of Party of China, New China, reform and opening-up and socialist development.

"After going to the university, our collective consciousness is not as strong as that of high school. This military training really made me feel closely connected to my classmates," said Yuan Lisha, a student of the School of Automotive Studies.